Thought by many last year to be on his way out of the Winnipeg Jets’ organization, Eric Comrie’s new deal will give him yet another chance to become an NHL goaltender.

The Jets recently re-signed the 2013 second-rounder to a two-year deal that carries a $700,000 average annual value (if he plays in the NHL).

Comrie Seemed Out of Chances

The signing was somewhat surprising, given it seemed Comrie was finally on the outside looking in of the Jets’ long-term goaltending plans for good. After Steve Mason’s departure last June, Comrie briefly seemed a shoo-in as the Jets’ next backup. Even after the Jets signed Edmonton Oilers’ cast-off Laurent Brossoit, it seemed a big-time crease battle was brewing.

The battle never materialized. The big-bodied Brossoit easily snagged the job, which sent Comrie back to the Manitoba Moose. Many, author included, saw Comrie as a trade chip back in February, but he ultimately wasn’t dealt and stayed put in the ‘Peg. 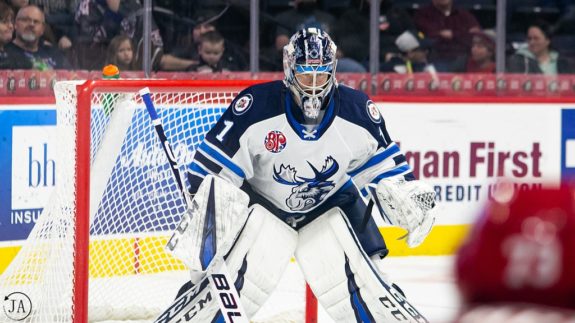 Comrie is a veteran of 183 AHL contests, but has just five career NHL appearances. (Jenae Anderson / The Hockey Writers)

Comrie is a good lateral mover and is very athletic, and he’s shown that over six AHL campaigns — two with the St. Johns IceCaps and the last four with the Manitoba Moose. In 183 career games, he possesses a 77-83-20 record with a 2.88 goals against average (GAA), .910 save percentage (SV%), and eight shutouts. Those numbers would be better if the Moose weren’t bottom-feeders and woefully deficient on defence for their first two seasons upon returning from the East Coast.

“He competes really hard and he’s really hard on himself. But I guess all great athletes or successful people, that’s what they do,” Moose head coach Pascal Vincent said.

“He learned to manage his intensity cause it’s not we had to push him, we had to slow him down,” Vincent continued. That’s the kind of guy he is. Great person. Really smart, I think he’s grown a lot and he’s a good player.” 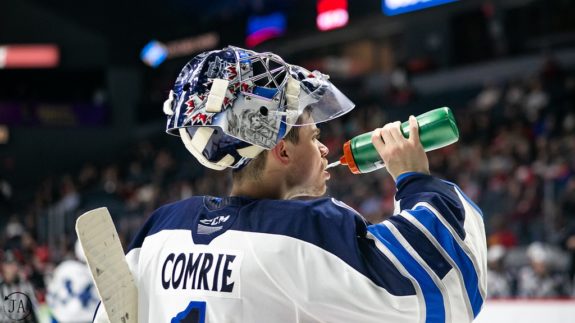 The now-24-year-old will have the chance to pass Schneider this season, because he’ll be spending it in the AHL.

Brossoit, who the Jets smartly re-signed to a one-year deal in June, was one of the NHL’s best backups last season and provided Connor Hellebuyck steady support. He’s firmly entrenched as the No. 2 guy for 2019-20. 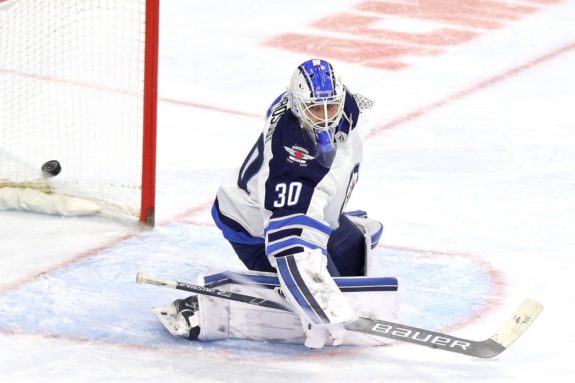 It’s after this season that Comrie’s opportunity may arise. If Brossoit plays as well as he did last season —  he posted a 13-6-2 record with a 2.52 GAA, .925 SV%, and a shutout in 21 appearances and thrived in high-shot volume games — he’ll likely be off to much greener pastures to an organization that will give him a chance as a starter. The only way Brossoit is with the Jets beyond this season is if he struggles.

If he does excel and ultimately depart, Comrie — with one year left on his contract — will have the chance to claim the backup role in 2020-21.

Road Still Not Easy for Comrie

The road to the NHL may have been reopened for Comrie, but it’s still full of potholes.

At 24, Comrie is no longer a “prospect” and will find himself in a battle for playing time with the flashy, fun-to-watch Mikhail Berdin. The “Birdman,” no doubt the Jets’ most-feted goalie prospect, quickly rose up the organizational ranks last winter thanks to his heady and highly-entertaining play with the Moose.

The Russian rookie put up a 12-8-3 record with a 2.34 GAA, .927 SV%, and two shutouts and quickly became a fan favourite due to his puck handling proclivity and ability to make improbable saves at important times. He was key to the Moose’s rise from dead-last at Christmastime to within two points of a Calder Cup playoff spot.

There’s no doubt Jets’ management will want Berdin, just 21-years-old, to get his fair share of starts to give him more seasoning; perhaps nearing the 30-start mark.

Comrie also hasn’t shown he’s capable of succeeding in an NHL crease. Five starts is not a significant sample size, to be totally fair, but his big-league numbers are ugly — a GAA above four and a SV% under .900. His only start last season, against the Minnesota Wild in early April, was an unmitigated disaster. 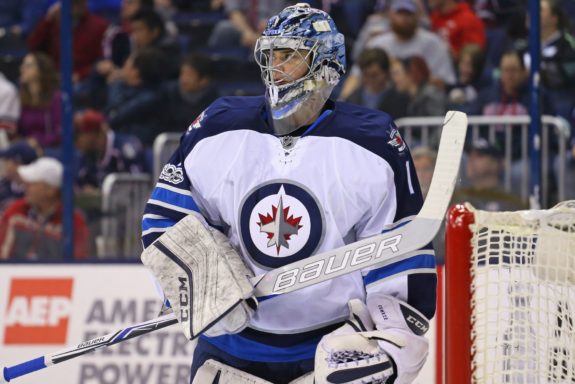 The jury’s out on whether Comrie can do better with an extended NHL opportunity. If Brossoit does depart after this season, the Jets could very well look for outside options again and force Comrie to take the spot by merit, not default.

Regardless, there’s an entire season between now and when Comrie’s next NHL shot will come, barring injuries. Whether he can take the umpteenth opportunity he’s been given to be an NHL goalie remains to be seen.

At best, the Jets have an insurance policy when it comes to their future goaltending plans. At worst, they have a solid guy in their AHL crease through 2021.

Vincent puts it best, saying “I think it says there is some hope and it’s up to him to grab the opportunity.”