The 2018-19 season was not a great one for the Winnipeg Jets. Sure, they finished second in the Central Division with 99 points, but after what they accomplished in 2017-18, something just did not seem right this time around. In this series, we will take a look at some key Jets players who may or may not have been part of the problem in their up-and-down 2018-19 campaign.

Adam Lowry has become a solid bottom-six centre for the Jets; he plays a tough game and makes life hard for his opponents. He spent most of last season centering the third or fourth lines and appeared in 78 games, finishing with 23 points (12 goals, 11 assists). He also finished with a plus-six rating – this is the third season in a row that he has finished with an above-even rating. One of his best attributes is his face-off ability; he won 57.6% of his face-offs last season, a new career-high for the 26-year-old.

#NHLJets HC Paul Maurice said there had been plenty of discussion in the coach’s office recently about mixing up his lines. Have to wonder how much longer he’s going to be willing to wait. First move I would make is reuniting Andrew Copp with Adam Lowry and Brandon Tanev

Lowry was very effective on a line with Andrew Copp and Brandon Tanev (otherwise known as the “TLC” line), but they only played a total of 252 minutes together all season long. If divided by their average ice times, that works out to only about 16 games of the regular season. When they were all together, they operated at a 55.93 Corsi for percentage (CF%) and were dominant at keeping pucks in the offensive zone.

The 6-foot-5 centre has become a well-known shutdown forward throughout the league over the years. Last season, and even throughout the playoffs, we would often see him go out against the other team’s best. If there was a key faceoff to be won, you send out Lowry to take care of it. This has become the regular for the Jets and one of the reasons Jets fans have grown to love him as a player. 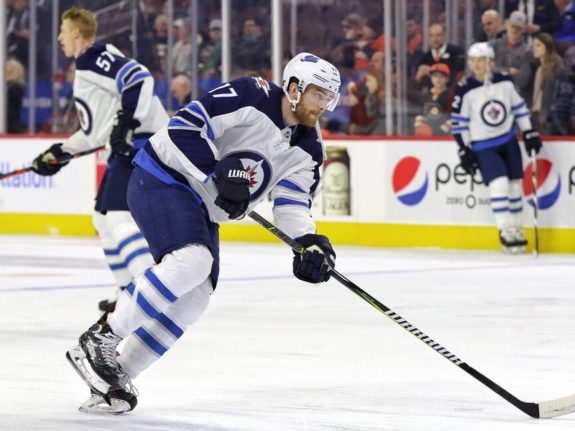 Lowry finished last season with 223 hits, the most since his first season back in 2014-15 when he registered a career-high 255 hits. He set a new career-high in takeaways with 42 and added 49 blocked shots – the second most in an individual season for his career so far. He is also a very effective penalty killer and has been one of the team leaders in penalty kill minutes per game over the last few seasons.

He continues to gain the trust of head coach Paul Maurice;he has grown into a very reliable player in all three zones of the ice. We see him on the ice for a lot of key situations, at vital moments in the game, and he does the little things well. Another great thing about him is his ability to change the momentum of a hockey game – whether the team needs a big penalty kill or some energy and sustained offensive zone pressure – Lowry and his linemates are usually the guys for the job.

I hear a lot of rumblings from fans about Lowry getting a shot at the number-two-centre spot for the 2019-20 season. While I do not think he is quite ready for that, if he was paired with the proper wingers it might actually work and balance the Jets lines a little better. One flaw in his game last season was his drop off in scoring. He only averaged 0.29 points per game – his lowest average since the 2015-16 season. If you pair him with more skilled wingers, you might see a resurgence in the offensive side of his game. 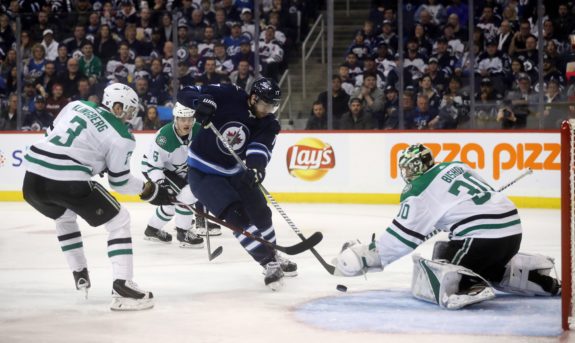 Lowry reminds me a lot of Ryan Kesler in-terms of his playing style – he is a guy who had strong defensive abilities from the start, then worked his way up to the second-line-centre spot during his time with the Vancouver Canucks. He blossomed for many years in that role, winning a Selke Trophy in the process. Putting Lowry in the Jets’ second-line-centre spot paired with the right talent could potentially turn him into a similar version of how Kesler was back in his prime.

It would definitely be something interesting to try even for just a handful of games. Maybe we would see fireworks? Maybe we would see the offense sputter? With young guns Jack Roslovic, Mason Appleton, and Kristian Vesalainen likely in the lineup, one thing is certain and that is Lowry will be leaned on to provide more leadership, and possibly more minutes, in 2019-20.

It was another good season for Lowry. I would not call it his best, but I would also not call it his worst by any means. He did a lot of good things and brought a lot of passion and toughness to the Jets lineup. I would have liked to see more offense out of him, but you can say that for a lot of players across the entire league. Scoring or not, he still brings a lot to the team with his strong defensive play and penalty killing. I think it is safe to say opponents do not like going up against the big-framed centre.

One of my favourite guys in the league is Adam Lowry. Just does a lot of things night after night.

Going forward, I would like to see what a Lowry, Copp and Appleton line can do for 2019-20. I predict that is how it will look to start the season in my recent article talking about the Jets 2019-20 projected lineup. No matter who he ends up playing with once training camp concludes, I am sure he will be just as effective as he always is. I think we will see similar offensive numbers from him in 2019-20 – maybe a slight increase but nothing drastic.

If the Jets try to balance their power play units more, we may very well see Lowry back on the top unit as we have in years prior, bringing a big net-front presence for the strong shooting of Patrik Laine and Dustin Byfuglien. All these question marks are what separate the Stanley Cup winning coaches from the non-Stanley Cup winning coaches; let’s see how Maurice handles things this time around.