The 2018-19 season was not a great one for the Winnipeg Jets. Sure, they finished second in the Central Division with 99 points, but after what they accomplished in 2017-18, something just did not seem right this time around. In this series, we will take a look at some key Jets players who may or may not have been part of the problem in their up-and-down 2018-19 campaign.

Josh Morrissey has become a staple on the Jets backend and is quickly turning into an elite NHL defenseman. He reached a new career high in assists (25) and points (31), power plays goals (3) and power play assists (7),
all while missing 23 games due to injury. He also reached a new high for average time on ice – 22:24 minutes per game. Expect those numbers to climb drastically again in 2019-20. 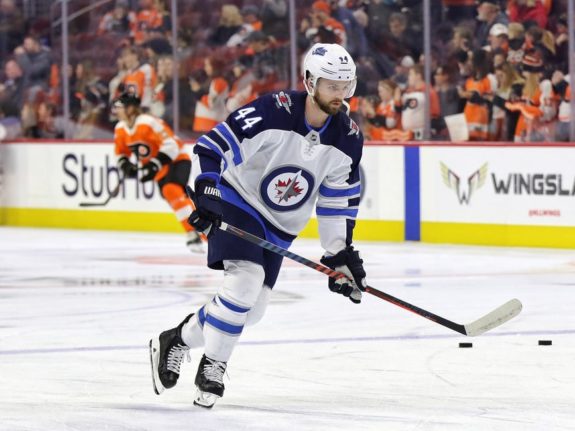 Josh Morrissey is considered one of the most underrated players in the NHL. (Amy Irvin / The Hockey Writers)

In three full seasons with the Jets, Morrissey has been able to stay fairly healthy. Last season was the first time he missed multiple games due to injury, when he was held out for over a month with an upper-body injury. The 24-year-old did not return from injury until game one of the playoffs versus the St. Louis Blues on April 10, 2019. He seemed limited with his playing time over the course of the series, averaging less than 19 minutes per game in four of the six games.

The former 13th-overall pick in the 2013 NHL Draft has quickly turned into the Jets’ most reliable defenseman with tons of room yet to grow. His point totals and playing time have been increasing every season so far and with the team looking somewhat inexperienced on the back end going into the new season, expect them to rely upon Morrissey to step up once again.

Morrissey has played at over 50% Corsi for percentage (CF%) at even strength in each of the last three seasons (50.1 CF% last season). He has a combined plus-30 rating over the last three seasons (plus-9 last season). His point per game totals went from .32 in 2017-18 to .53 in 2018-19. His penalty minutes dropped from 58 in 2017-18 (career-high) to just 24 last season. He saw increased power play time last season and will surely battle with Dustin Byfuglien and Neal Pionk for the top spot this season. For the record, I fully expect Byfuglien to hold onto the top power play spot with Morrissey and Pionk on the second unit.

The thing I enjoy the most about Morrissey is his willingness to block shots. How many times do we see him step in front of blistering shots and get right back into the play and do it again? The guy is a warrior and displays it on every shift he is on the ice. It has also been interesting to see him start his NHL career with such strong defensive awareness and responsibility. For a kid coming out of juniors projected to be an offensive defenseman, he did well to put that part of his game on hold while he developed the defensive side first. Now that he has done that, we are starting to see what he can really do with confidence and experience taking over.

Holding Down the Top Pairing

Morrissey has been holding down the left side of the top defense pairing for quite some time already – the majority of it has been with Jacob Trouba on the other side of him. I think it is safe to say he will hold onto that spot for many years to come. His consistency last season and his effectiveness on the power play and penalty kill were a huge part of the team’s success last season. He gives Jets fans a sense of comfort when he is on the ice and that’s something only the best of the best can do.

Trouba says he loved playing with Josh Morrissey. “He’s a special player. He can do a lot of things that are underrated. He does things that make the game easier for people he’s playing with. He’s got all the talent in the world, and he’s a very good person and teammate. ” #WFP

With Trouba’s departure, the question now is – who takes over the right side? He is an elite NHL defenseman; there is no denying that. So, will Morrissey still be as effective on the top pairing with someone of lesser talent on the other side of him? The answer to the question is yes. In my opinion, he will hold his own no matter who plays with him. As I stated in my Jets 2019-20 projected lineup article, I think Pionk will start the season on the top pairing with him.

Despite Morrissey having his first setback due to injury, I still think he had a very strong 2018-19 season. As mentioned, he hit new career highs in multiple categories and has become a lock on the left side of the Jets’ top defense pairing. He truly is becoming an elite NHL defenseman and I think 2019-20 could be the season we see him involved in conversations regarding other elite defensemen from around the league.

It was great to see Morrissey return for the 2019 playoffs, but it seemed like he was rushed back and probably would not have returned had it still been the regular season. Between him being out of hockey for over a month and still not being 100%, you could tell he was limited with what he could do against the Blues in the first round.

Josh Morrissey’s injury in February was a shoulder injury.

“Nothing that would require surgery or anything like that.”

Wasn’t 100% in the playoffs but says he’ll heal without surgery cleanly over the summer.

His regular season was still one of his best before the injury and I fully expect him to continue his strong growth in the NHL over the next few seasons. There is still a lot of untapped potential in his game and we could very well see that this season. Expect big things from Morrissey in 2019-20 and beyond as he continues to hold down the Jets’ top defense pairing.