Welcome to Jets Weekly, where you can catch up on the past week of Winnipeg Jets hockey. From hot topics to news and notes, this is where you can find all things Jets related throughout the 2019-20 season. 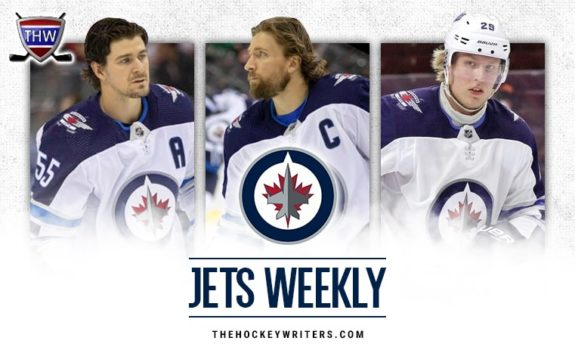 The Jets have struggled at home, for the most part, this season. Their homestand is not going as expected; they’ve failed to generate consistent offense and are constantly having defensive breakdowns.

They had two ugly losses to the Arizona Coyotes and New York Islanders to start the week which resulted in their 4-3 record dropping to 4-5. They cleaned things up on Sunday and put together a solid effort against the surging Edmonton Oilers. They came away with a 1-0 shootout victory in the tight-checking affair. Kyle Connor and Patrik Laine both scored in the shootout to help secure the win.

The Jets’ power play has had some good moments this season but has also let the team down in certain games. For power play that ranked 4th in the NHL last season, it is not where it needs to be right now. They are ranked in the middle of the pack and need to work on their consistency to get back near the top. 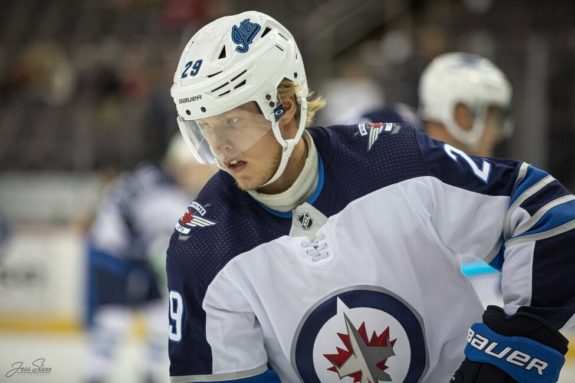 Patrik Laine is back to ripping one-timers on the Jets’ power play. (Jess Starr/The Hockey Writers)

The Jets still have all the weapons they need to run a successful power play. Laine is still anchored to the left side and he will start to click eventually. His accuracy seems a little off but he will settle things down as the season progresses.

The Jets’ penalty kill ranks at the bottom of the NHL and has been one of the biggest concerns so far this season. Operating around the 60% mark is not a recipe for a successful regular season and the Jets will need to address this immediately. It’s a good thing they are one of the least penalized teams in the league or their struggles would look a lot uglier.

The penalty kill looked much better against the Oilers’ top-ranked power play unit which is operating near the 40% mark – hopefully, that is a sign of things to come and not just a one-time thing. The Jets have some solid penalty-killers in Adam Lowry, Andrew Copp, and the return of Bryan Little, so there is no excuse for being at the bottom of the league.

Little made his regular season debut against the Oilers after sitting out the first nine games due to the concussion he suffered in the preseason against the Minnesota Wild on Sept. 29. 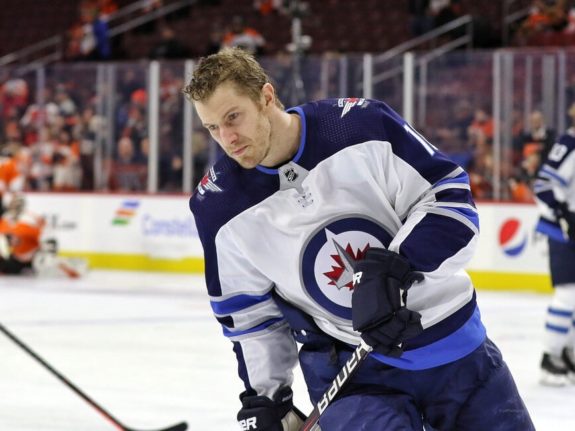 Bryan Little made his regular season debut against the Oilers on Oct. 20. (Amy Irvin / The Hockey Writers)

He played just over 16 minutes, registering two shots on goal, one hit, two blocked shots, and two penalty minutes after taking a slashing minor late in the second period. Little also finished 6/12 in the face-off circle and played a key role in the Jets’ penalty kill.

The Jets will be happy to have his versatility and veteran presence back in the lineup. He does all the little things well and makes everyone around him better. Little will take a game or two to get back into the swing of things but expect him to hold down the second-line center spot as long as he is healthy.

Paul Maurice finally got his 700th career win as a head coach on Sunday against the Oilers. I say finally because it was a hot topic all week and, unfortunately, the Jets were unable to come through in the three games before Sunday’s contest. Say what you want about the coach, but for Maurice to earn 700 NHL wins at the young age of 52 is a remarkable accomplishment.

He became the seventh NHL head coach to reach 700 wins and is just 36 wins behind Lindy Ruff who is sixth. Another notable head coach is closing in on 700 wins – Mike Babcock of the Toronto Maple Leafs has 696 career victories.

A Look at the Week Ahead

The Jets have just two games on tap this week as their homestand continues against the Los Angeles Kings on Oct. 22, followed up by the Heritage Classic in Regina, Saskatchewan against the Calgary Flames, an event that generates a ton of interest every season.

The Jets participated in the 2016 Heritage Classic at Investors Group Field against the Edmonton Oilers – a game they lost 3-0 with now current Jet Mark Letestu getting the game-winning goal. Expect Mosaic Stadium to be rocking on Oct. 26 with a solid mix of Flames and Jets fans. You will probably see a number of Saskatchewan Rough Rider jerseys as well, you can decide whether that’s a good thing or not.

Thank you for reading this week’s edition of Jets Weekly. Stayed tuned for next week’s edition and, as always, feel free to leave any feedback or questions in the comments section below, or follow me on Twitter @Goet91.