The Manitoba Moose had a strong November after their disastrous one-win October. Despite a number of players making the jump to the Winnipeg Jets — such as Joona Luoto, Logan Shaw, and Michael Spacek — and dealing with a number of injuries to key personnel — such as Seth Griffith, Sami Niku, Peter Stoykewich, and Logan Stanley — they posted a 11-4-0-0 record and pulled themselves out of the Central Division basement.

A Pile of Milestones, a Pair of Wins

The Moose began their month with a two-game weekend homestand against the Grand Rapids Griffins. The first game of the set was JC Lipon’s 400th American Hockey League contest. It was one to remember for the alternate captain as he scored twice, including the third-period game-winner, in a 5-3 victory. Jansen Harkins, meanwhile, tied a Moose record dating back to 2000 by tallying five assists, and Seth Griffith scored his 100th AHL goal with an empty netter. 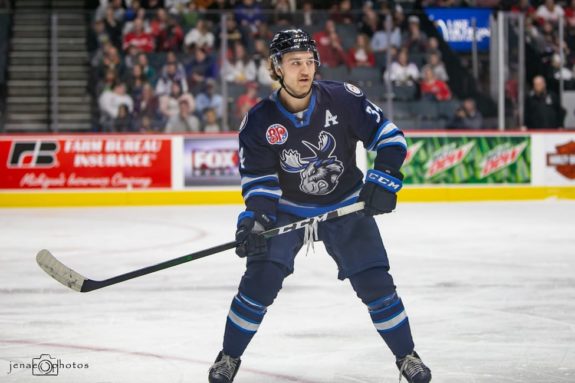 In the rematch the following day, Griffith scored a hat trick in a 7-4 win. Defenseman Cameron Schilling played in his 500th AHL game, and like Lipon, scored two goals including the game-winner. 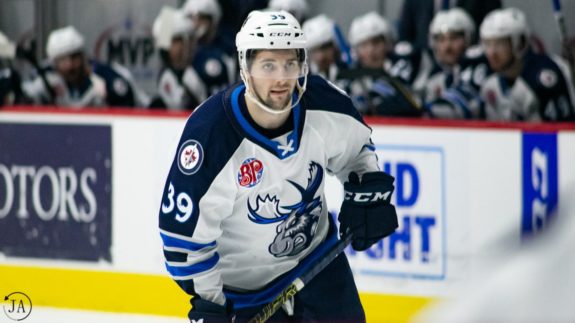 The Moose blew a 4-1 lead in the game but were powered by the two aforementioned players as well as Harkins, who tallied three more points to push his total to eight for the weekend. Ville Heinola, sent down prior to the series, tallied his first AHL point with an assist.

After scoring just 15 goals in their first eight games, the Moose scored 12 in the two-game set against the Griffins. Jansen Harkins recorded points on eight of them, netting himself AHL Player of the Week honours.

The Moose then departed for a three-game divisional road swing. In the first of three — a Wednesday morning contest against the Milwaukee Admirals — they relinquished three straight one-goal leads and eventually fell 6-4. Goaltender Mikhail Berdin struggled as he did through much of October, allowing five goals on 31 shots through two periods before getting the hook.

Berdin bounced back in a big way in his next two starts, however, becoming the first Moose goalie in franchise history to post shutouts on back-to-back nights. He was simply unconscious against the Rockford IceHogs, making 41 saves in his team’s 4-0 win, and followed up the performance up by stopping 26 shots in a 3-0 victory over the Chicago Wolves the next day. 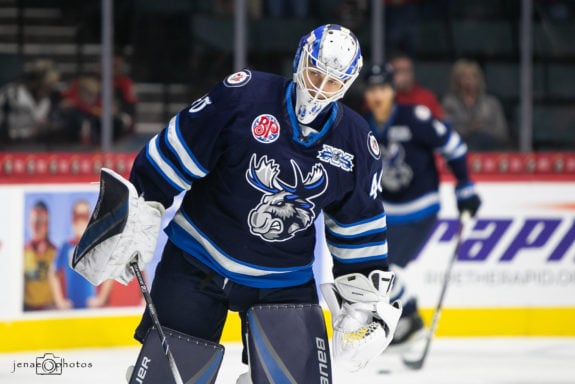 Mikhail Berdin bounced back after his poor performance in Milwaukee by posting back-to-back shutouts, including a 41-save performance in Rockford. (Jenae Anderson / The Hockey Writers)

In the game versus the IceHogs, Michael Spacek and Sami Niku both had a pair of points and Seth Griffith scored his sixth goal in his past four games in the third period. For Spacek, his two-point performance snapped a five-game pointless streak. In the game versus the Wolves, Harkins and Niku pushed their point streaks to five games each.

On Remembrance Day, wearing specialty jerseys to honour the military, both Harkins and Niku extended their point streaks to six games each and the team extended their winning streak to three with a 4-1 victory over the Texas Stars. They did most of their heavy lifting early, scoring three in the first period and then weathering the Stars’ pressure in the second and third. Up 3-1 in the final minutes, prolific puck-handler Berdin even took a shot at the empty net, but his attempt went just wide. 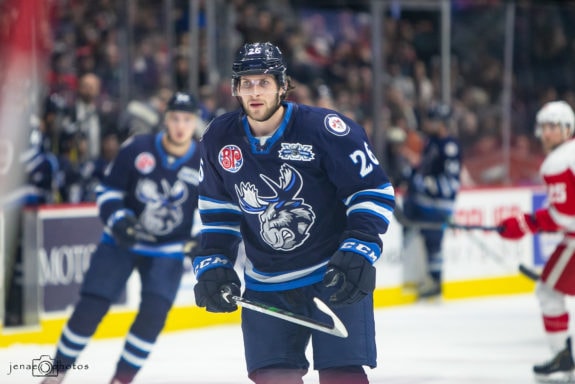 Jansen Harkins recorded a goal and added two assists in the two games against the Stars. After the pair of contests, he sat fifth in the AHL and first the Moose in scoring with 17 points… and would only keep rising as the month went along. (Jenae Anderson / The Hockey Writers)

In the rematch, Harkins and Niku both extended their streaks once again in a 2-1 victory. Berdin’s 36 saves saw that Emile Poirier’s second-period goal stood as the game-winner even though the Moose were heavily outshot and out-chanced.

The Moose were again heavily outshot — 46-26 — two nights later in the first of a two-game set versus the San Antonio Rampage, but the usual suspects helped the Moose capture their fifth straight win. Harkins tallied two more, points, as did Griffith, who scored the overtime winner. Strong, rugged forward Andrei Chibisov also had a goal and an assist in the victory. 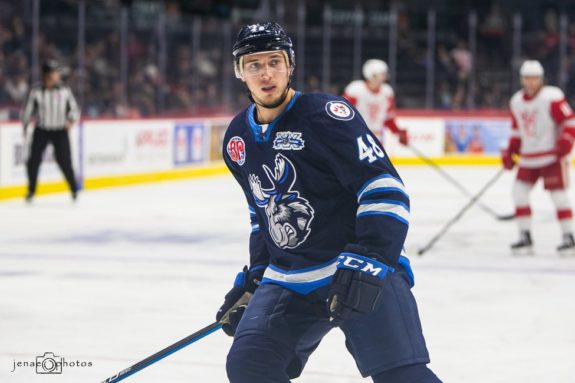 Rugged Russian forward Andrei Chibisov scored a goal and had an assist on Griffith’s game-winner. (Jenae Anderson / The Hockey Writers)

The Moose made their homestand a perfect one and captured their sixth-straight win in the rematch. Cole Maier scored the game-winner at 3:26 of the third period to break a 2-2 deadlock en route to a 5-2 win, in which Harkins extended his point streak to nine games with a pair of assists.

After the homestand, Berdin rightfully became the second Moose of the month to be bestowed with AHL Player of the Week honours.

After the Moose rolled into Belleville for the first game of a seven-game road trip and captured a 2-1 victory to push their win streak to seven, they found themselves in Toronto for a pair of dates with the Marlies.

The Moose have had trouble with the Marlies in their first four-plus seasons since returning from St. John’s — posting a 5-20-0-1 record prior to the two-game weekend series — and the trend of troublesome play against T.O. continued. They lost both matchups, by 4-2 and 4-1 scores, respectively. 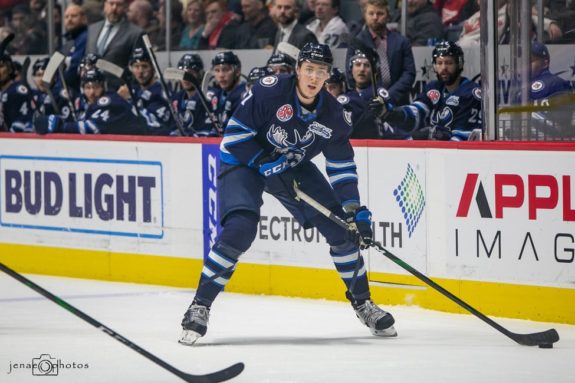 Logan Stanley returned from injury in the second game against the Marlies, but couldn’t help his team to victory. (Jenae Anderson / The Hockey Writers)

In the former, the Moose fell behind 4-0 and couldn’t recover despite a strong third; Jansen Harkins was held off the scoresheet and saw his streak end at 10 games. In the latter, they were down 2-1 before two late third period Marlies’ goals stretched out the score.

Back to the Central

The Moose capped off the month with three games in divisional opponents’ barns. After losing both to the Marlies, they meandered into Milwaukee to face an Admirals squad that had won ten straight. The Admirals proved too hot to handle and doubled up the Moose 6-3. On the positive side, Jansen Harkins recorded a goal and an assist, as did Seth Griffith, who returned after missing three games due to taking a puck in the face. 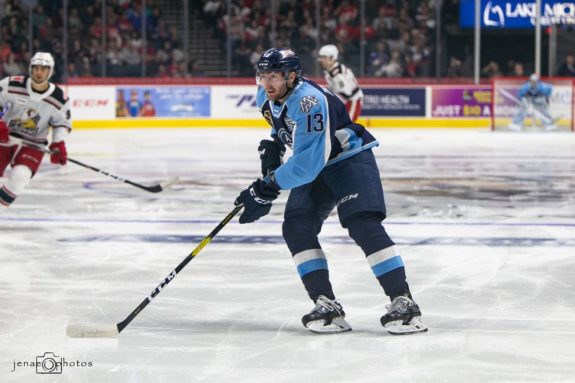 Yakov Trenin paced the Admirals with two goals and an assist in a 6-3 victory. (Jenae Anderson / The Hockey Writers)

The Moose rebounded two nights later and put an end to their three-game skid in Grand Rapids, where they captured a 4-2 win over the Griffins. Goaltender Griffen Outhouse made his first-career AHL start and made 26 saves to capture his maiden victory; C.J. Suess, Jansen Harkins, and Nelson Nogier all had a pair of points. 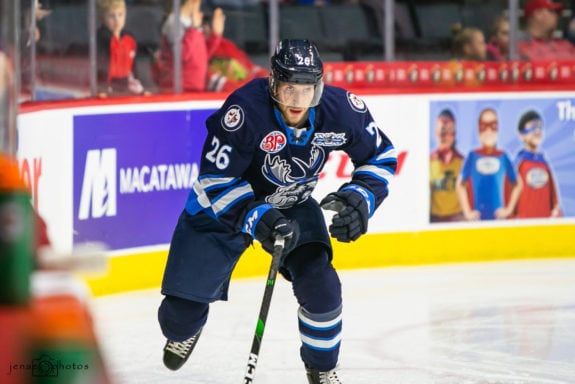 Jansen Harkins had a monstrous month: the third-year pro sits tied for the AHL lead with 27 points. (Jenae Anderson / The Hockey Writers)

The Moose put a bow on their month the next night with a 3-2 overtime victory over the Chicago Wolves. Towering defenseman Jonathan Kovacevic took Harkins’ backhand pass and blasted one past Garret Sparks to lift his team to their eleventh November victory.

The Moose were deal last at the beginning the month but are now right in the thick of the Central Division race.

They begin by wrapping up the seven-game road trip with a tilt against the Rockford IceHogs before returning home for two against the Wolves on Dec. 6 and 7 (the latter is the annual Teddy Bear Toss.)

Then they’ll head right back on the road, this time to the Lone Star state for four — two each against the Stars and the Rampage — before heading to the Mile High City for a pair against the Eagles.

After that, the team will be home for the holidays and they’ll be hoping they won’t be beaten at home sweet home. They’ll wrap up the 2019 portion of the schedule with the first four of six straight at Bell MTS Place: two against the Rampage and two against the IceHogs, their last being a 4 P.M. New Year’s Eve matinee.