It was a stomach-turning scene at Bell MTS Place Tuesday, as Bryan Little was smoked in the side of the head by Nikolaj Ehlers’ scorching slap shot.

The sight of the impact and Little crumpling to the ice by the side of the net during the third period of the Winnipeg Jets’ contest against the New Jersey Devils silenced Bell MTS Place. After being down for a few minutes, the veteran centre was able to make his way off the ice under his own power alongside training staff and a sick-looking Ehlers.

Skating behind the net, Little was completely unaware Ehlers’ shot was headed straight for his head and could do nothing to brace himself for or avoid the impact.

Little was first taken to Winnipeg’s St. Boniface Hospital to receive stitches to fix the huge cut the impact opened, then was transferred to the Health Sciences Centre’s neurological unit for observation, a release from the Winnipeg Jets’ PR Twitter account said Wednesday.

The extent of Little’s injuries are more severe than a simple gash or even a concussion. On Wednesday, Global News reported Little suffered a brain bleed on the play.

What is a Brain Bleed?

A brain bleed, the more common term for an intracerebral hemorrhage, is internal bleeding in the brain caused by a burst artery. The most common cause of a brain bleed for people younger than 50 is head trauma or a traumatic brain injury (TBI).

Symptoms include headache, trouble balancing, seizures, nausea, and changes in vision, among many others. Severe or untreated brain bleeds can lead to coma or death. Quite simply put, they are scary and serious stuff.

Luckily, the Jets’ medical staff knew this and got Little medical assistance immediately. He never lost consciousness and was alert at all times.

How Long Will It Take Little to Recover?

No one knows for sure, but it could be a long time. This is Little’s second head injury in less than two months; he missed the first nine games of the season with a concussion he suffered in the final game of the preseason after taking a high hit from the Minnesota Wild’s Luke Kunin. 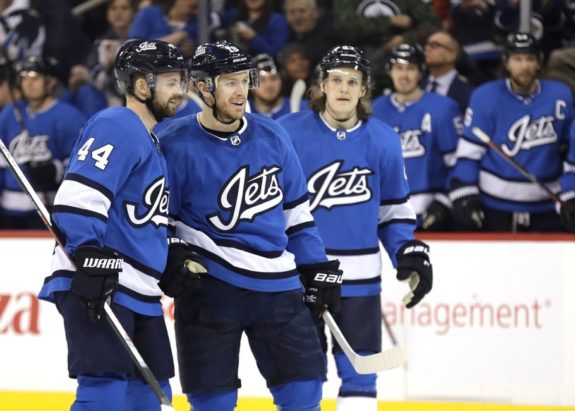 It could be a long time before Little (centre) is able to join his teammates on the ice again. A brain bleed is a serious injury. (James Carey Lauder-USA TODAY Sports)

A report published by The Sports Medicine Review entitled The Conundrum of Return to Play after Moderate TBI reads: “The American College of Sports Medicine (ACSM) has made recommendations regarding management of moderate TBI and, most notably, recommended that a minimum of three-to-six months is needed for a skull fracture and, if a brain bleed such as a subdural is incurred, that a repeat scan would need to show resolution of the bleed and re-expansion of the brain tissue.”

Head coach Paul Maurice confirmed Thursday that Little has a perforated eardrum and is dealing with vertigo. However, Maurice did not mention a brain bleed. Whether the Global report was erroneous is unclear.

Regardless, doctors expect Little to make a full recovery, but there’s no timeline for his return to hockey activities. 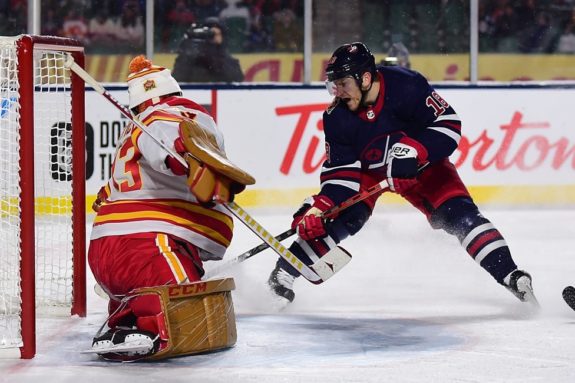 “He’s in good spirits,” the bench boss said. “One side of his head’s bigger than the other but he’s good.” Little was released from the hospital Thursday evening.

Who Plays in Little’s Spot?

Who takes over at second-line centre in Little’s stead — who was excellent and tallied five points in seven games between injuries — is trivial given someone’s long-term well-being is at stake.

However, life goes on for Little’s 8-7-1 squad, which will play 11 more games this month and is still searching for consistency and continuity.

During Thursday’s line rushes, it was winger Blake Wheeler anchoring the second line, flanked by Ehlers and Jack Roslovic.

Wheeler hasn’t played much centre recently, but the role isn’t foreign to him. His last extended stint in the middle came in 2017-18 while Mark Scheifele was injured. That season, he won 166 faceoffs and lost 196, for a 45.9 winning percentage. 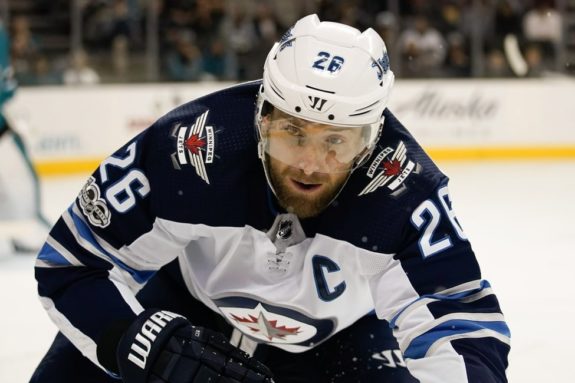 Wheeler, seen here during the 2017-18 season, played the most centre of his career that campaign. (Stan Szeto-USA TODAY Sports)

The role will come with more defensive responsibility and will be a challenge for the Jets’ captain, but a separation from Scheifele could be just what the doctor ordered. The duo has underperformed at five-on-five and Wheeler especially has looked lost for most of this season. He has posted just two goals and no assists in his last ten games and still has no power-play points.

“I’m excited. I think playing with Jack and Fly, our line can be pretty fast up and down the ice,” Wheeler said Wednesday. “I work here, so I’m willing and able to do whatever they need. Outside of playing goalie, I’ll try anything. Like I’ve said, we’ve had some unfortunate circumstances already this year, so I’m just looking to help wherever I can.”

Blake Wheeler on the opportunity to play centre

If that doesn’t work out, Andrew Copp could be given another shot. He began the season in the role, skating mostly with Kyle Connor and Ehlers. The 25-year-old is a proven play-driver at this point in his career, and in 2019-20, has recorded four points, posted strong possession numbers, and won a career-high 56.4 percent of his draws. 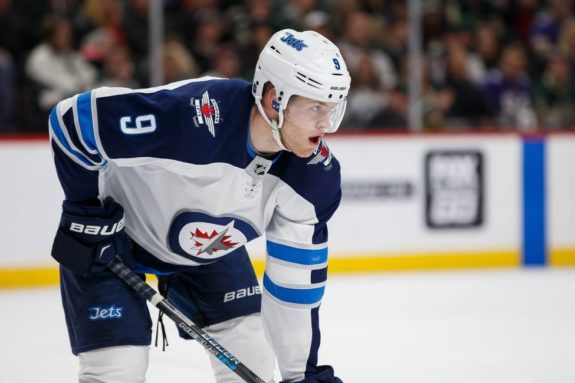 Andrew Copp could also get another shot up the middle if the Wheeler experiment doesn’t work out. (Brad Rempel-USA TODAY Sports)

Little’s Health Is Most Important

Finding a viable second-line centre is important given absolutely nothing is coming easily for the Jets —who thought goal scoring would be a problem? — but it’s much less important than Little’s long-term health.

We at The Hockey Writers wish him nothing but the best going forward, and hope he can return to the ice in the future, but only after it’s 100 percent certain he’s at 100 percent.