There was absolutely zero trace of panic in their voices nor, for that matter, any hint of concern on their faces.

The champs have seen their herd of homegrown talent thinned out over the winter with the departures of Andrew Harris (Toronto Argonauts), Drew Desjarlais (New England Patriots), Jonathan Kongbo (Denver Broncos), and with last year’s first-round pick – offensive lineman Liam Dobson – now in the USFL.

Couple those exits with the fact Tui Eli, last year’s sixth offensive lineman who was suspended for the Grey Cup because he was unvaccinated, remains an unsigned free agent and the Canadian content isn’t as deep as has often been the case over the past few springs.

All that said, the is cupboard is hardly barren with 20 returning Canadians. And with seven picks in this draft there is opportunity to find future starters and role players – something this regime has done so effectively since first slipping behind the wheel of this franchise in 2014.

“We are a little thin compared to where we have been with our Canadians with the offensive line in particular,” said Walters in a media conference call. “Certainly, we’re not at the stage where we have to draft a Sukh (Chungh, 2ndoverall in 2015) or Matthias (Goossen, 2nd overall in 2014) and basically say ‘Boy, we need someone to step in and start.’

“We’ve got a little more flexibility with the ratio and a big part of it is our defensive staff is so creative with the way they handle their personnel and all their substitutions, that as long as we give Richie (Hall, defensive coordinator) and JY (Jordan Younger, defensive backs coach) the rest of the tools, they’ll figure out the ratio to figure out the best guys on the field regardless of nationality.

Even as collective bargaining discussions continue and the reducing the Canadian player ratio is a looming and contentious issue, homegrown talent remains the core of the club’s championship roster with CFL All-Star guard Patrick Neufeld joined by West Division All-Stars Nic Demski and Mike Miller. Further to that, five of the seven Canadian starters from the Grey Cup – Neufeld, Demski, centre Michael Couture, wide receiver Drew Wolitarsky and defensive tackle Jake Thomas – are back, following the departures of Harris and Desjarlais.
Of this explains why every team and especially the crew here of Walters, O’Shea and Assistant GM/Director of Player Personnel Ted Goveia, spend thousands of hours prepping for the event.

What follows below is our annual CFL Draft primer, which touches on a few issues as the Bombers finish up final preparations for Tuesday. 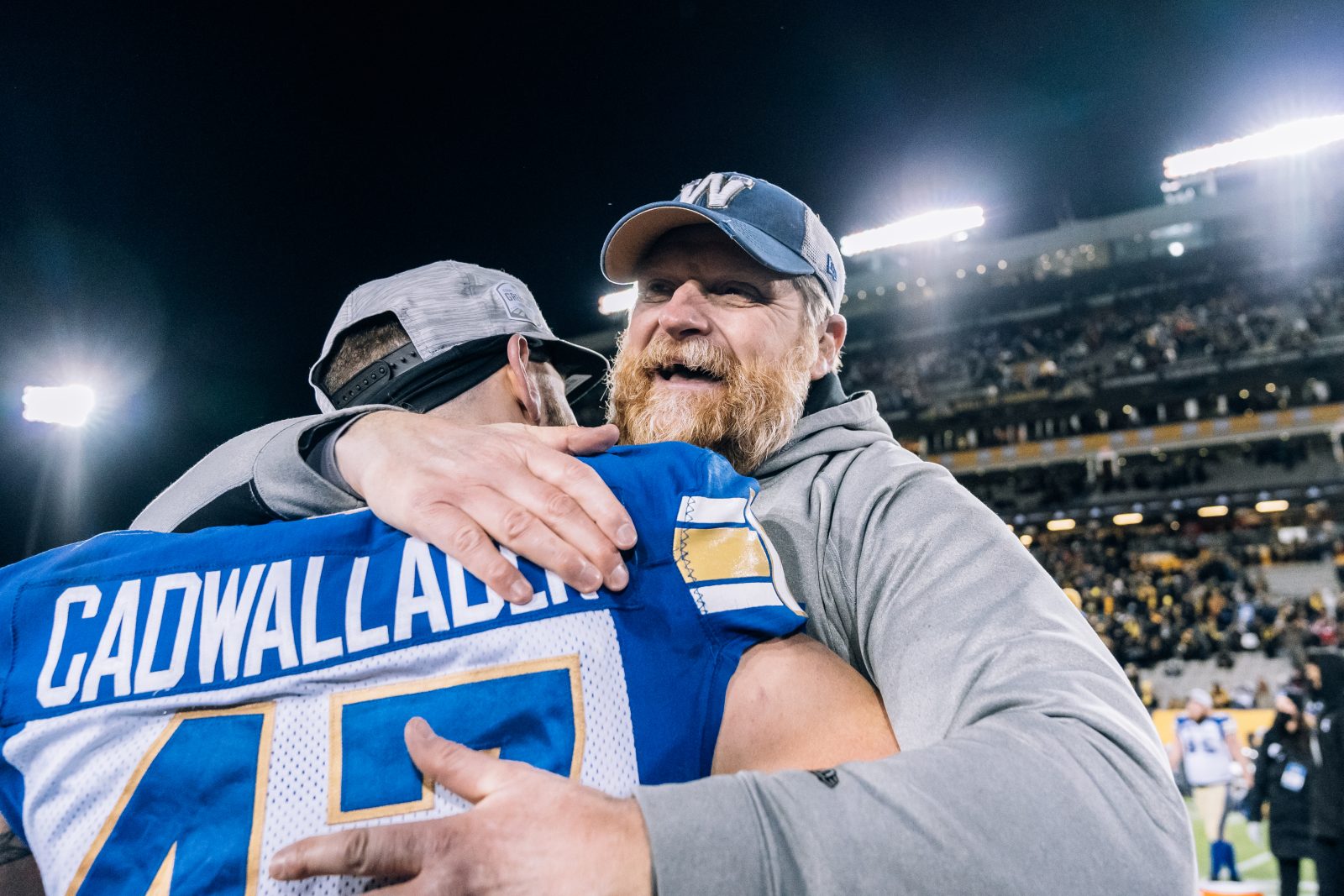 What: The CFL’s 2022 Global and CFL Drafts
When: Tuesday, May 3rd
The Global Draft begins at 11 a.m. and is then followed by the main CFL Draft at 7 p.m.
How to watch: The Global draft is not televised. The first two rounds of the CFL draft can be seen on TSN and RDS. Rounds 3-8 can be seen live on tsn.ca and the TSN app. The picks can also be followed here. 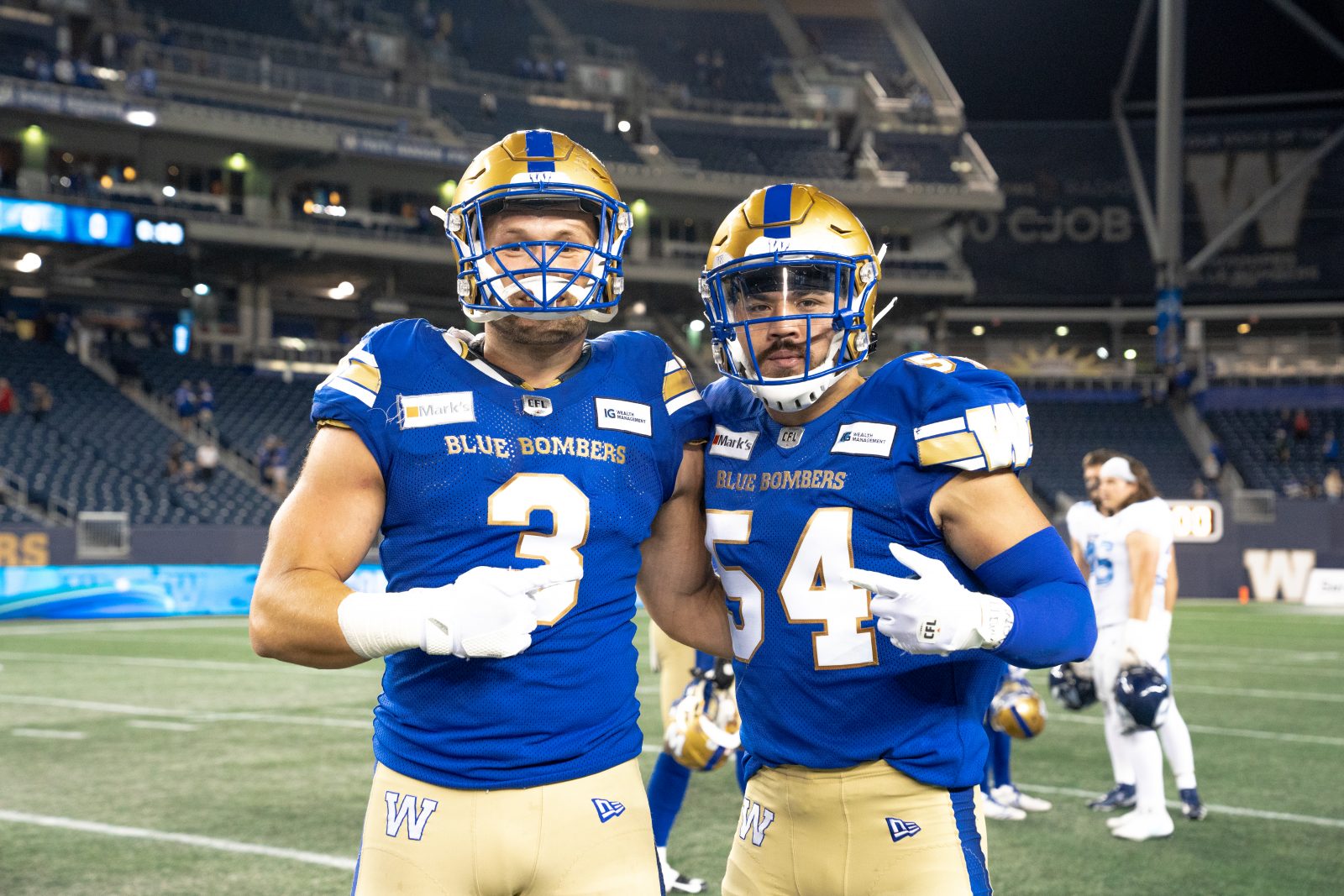 FAQ ABOUT THE BOMBERS IN THE DRAFT

What are the club’s areas of need, Canadian-wise?

The trenches took some hits with Desjarlais and Kongbo now in the NFL, with Eli’s status uncertain as an unvaccinated player and Liam Dobson in the USFL. Interestingly, Dobson has yet to suit up for a game for his New Orleans Breakers, making his decision to commit to the start-up league as a possible steppingstone to the NFL that much more confounding.

Dating back to 2014 and the first draft for this current regime the Blue Bombers have had seven first-round picks, of which five were used on offensive linemen and two on defensive lineman. It only stands to reason the club looks at this area again.

We asked O’Shea last week about the possibility of the club starting a Canadian at safety to open the 2022 season with all-star Brandon Alexander recovering from knee surgery and he confirmed that is a possibility. The options there before the draft include Nick Hallett, Noah Hallett (who missed the playoffs with a knee injury), possibly Redha Kramdi or Malcolm Thompson, signed as a free agent this winter. Patrice Rene, a 2021 draft pick, would likely also be in this conversation, but he is currently not signed.

Have Kyle Walters & Co. displayed any trends in their previous draft classes?

We’ve hinted at this above, but this regime tends to stock the trenches with early picks. Consider that of the 17 first and second-round selections by this bunch dating back to 2014 – seven first rounders, 10 second rounders – seven were used on O-linemen and three on D-linemen. The other picks included three defensive backs, two receivers, one linebacker and one running back.

And don’t write off the chances of later-round picks making the roster and contributing. Consider this: Jake Thomas, Shayne Gauthier, Nick Hallett, Brendan O’Leary-Orange, Marc Liegghio and Robbie Lowes all saw action last year and all were picks outside the first three rounds. 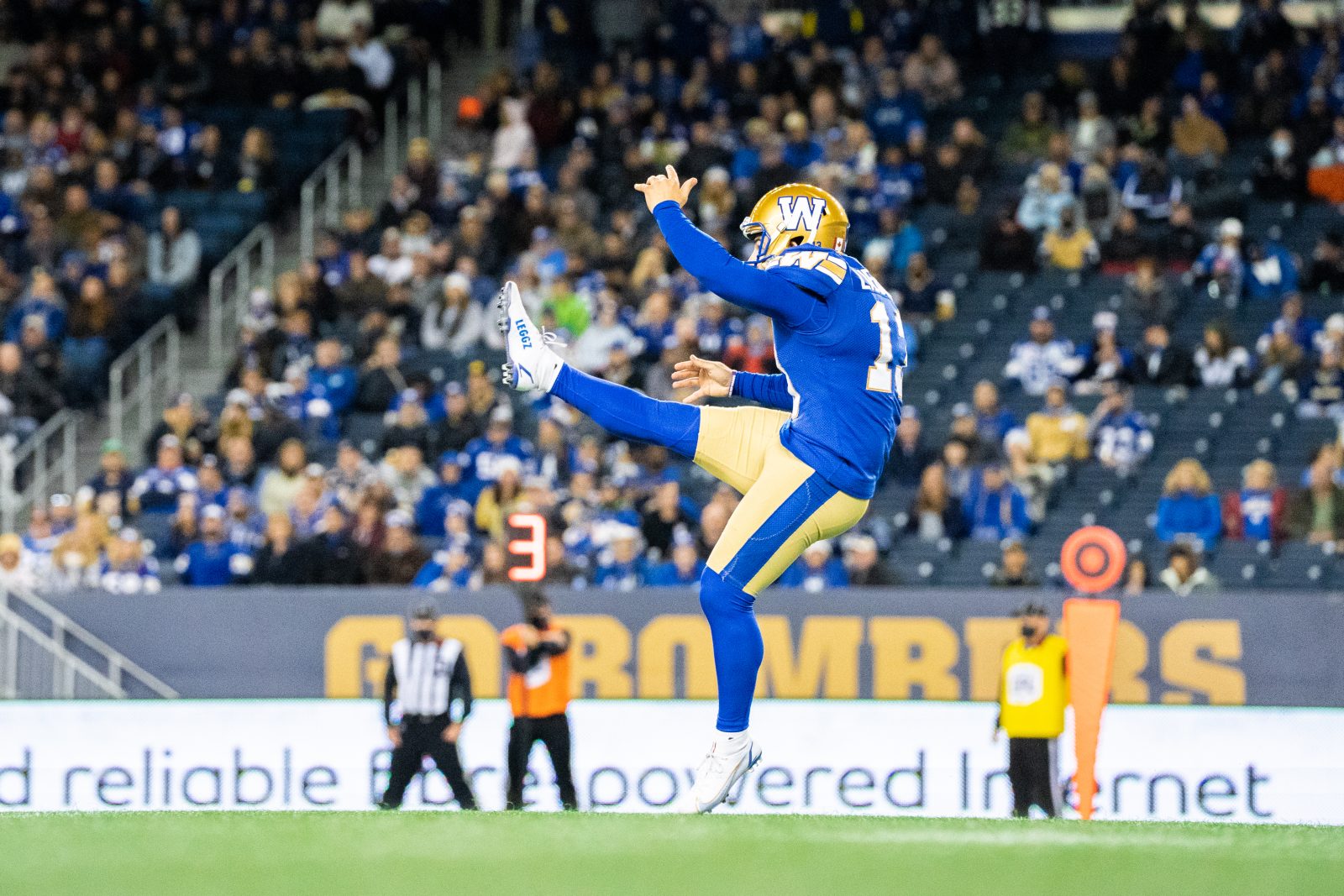 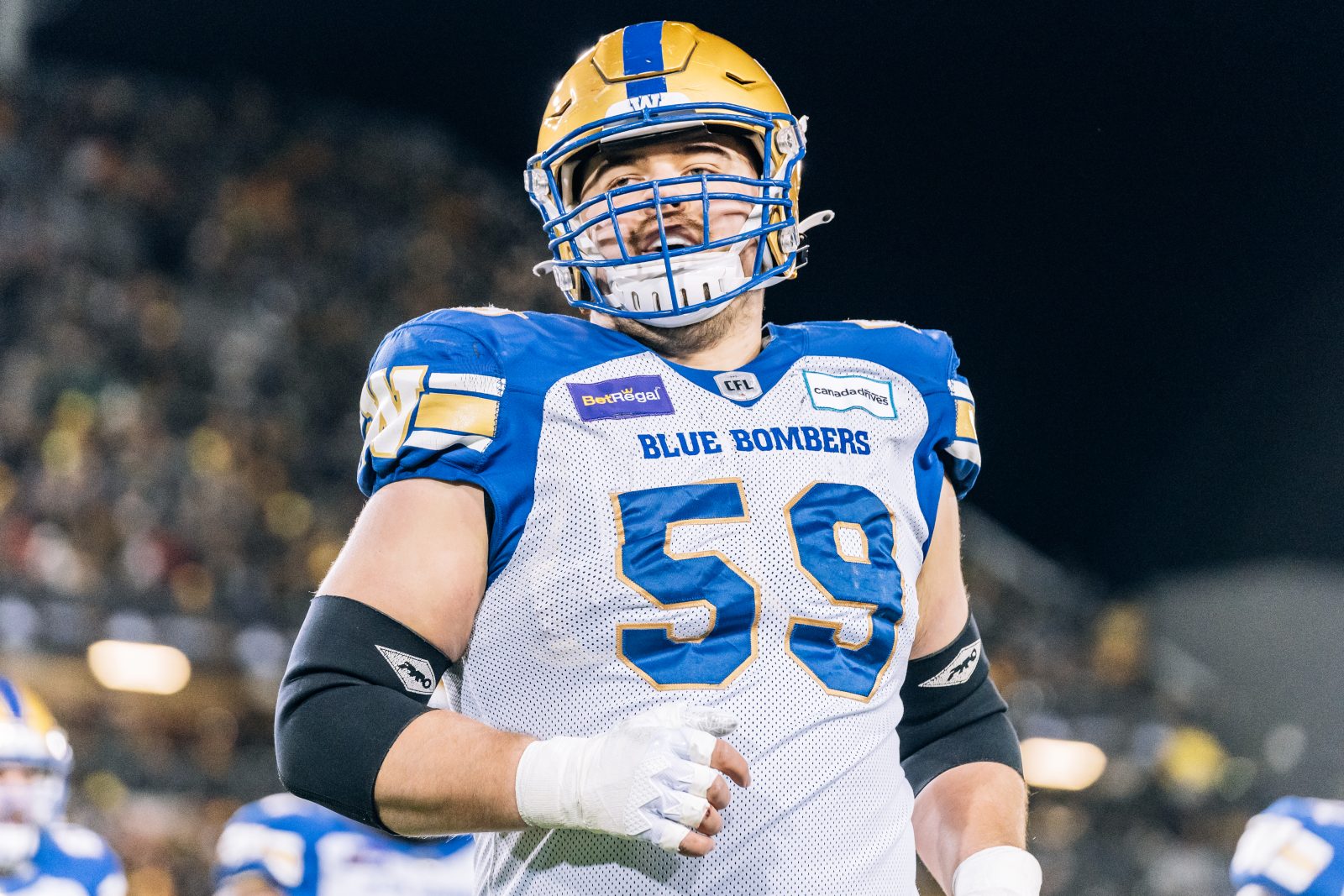 OTHER CANADIANS CURRENTLY ON THE ROSTER

SB Nic Demski* – Round 1, 6th overall, by Saskatchewan in 2015; signed with Winnipeg as a free agent in 2018. The Bombers Most Outstanding Canadian and a West Division All-Star in 2021.

RB Johnny Augustine – First signed as an undrafted free agent by Edmonton in 2017; signed with Winnipeg as a free agent in 2018 and has 39 regular-season games now to his name.

LS Mike Benson – Free agent addition and veteran long snapper signed as a free agent in 2021. First signed by Edmonton as an undrafted free agent in 2012 and now has played in 103 career games with Edmonton, B.C., Ottawa and Winnipeg.

OL Chris Kolankowski – Round 6, 49th overall, by Toronto in 2016; Dressed for two regular-season games and in the Grey Cup last season. Now has two Grey Cup rings – including from the 2017 Argos.

LB Eric Mezzalira – Round 2, 17th overall, by Calgary in 2018. Appeared in 22 CFL games, all with the Stamps, and was on Toronto’s practice roster last year.

LB Anthony Valvano – Signed by the Bombers in March after finishing his college career with the Vanier Cup champion Western Mustangs. Valvano was part of two championship teams at Western as a fullback and special-teams contributor. 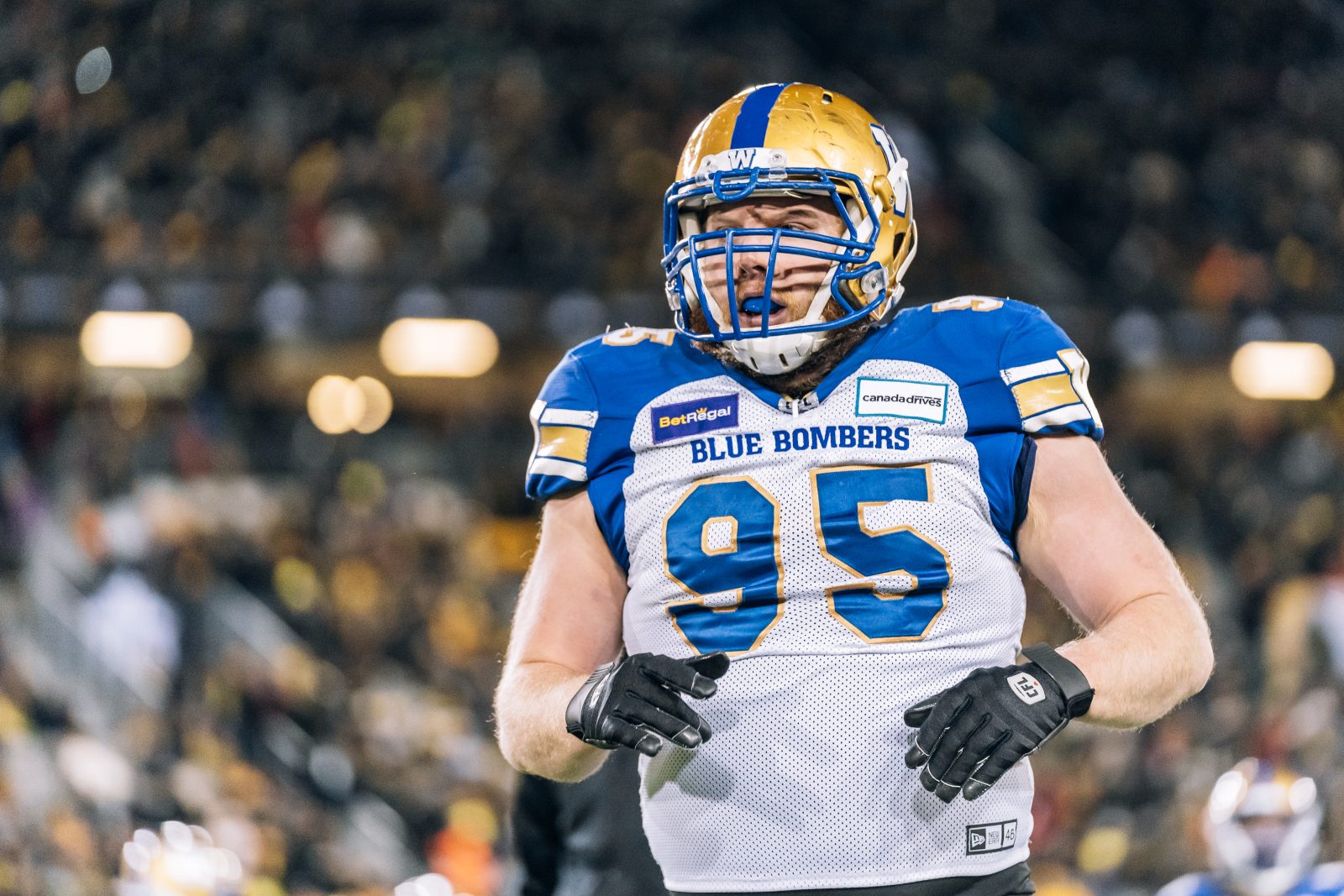 (6293)
$7.49 (as of June 29, 2022 10:08 GMT -05:00 - More infoProduct prices and availability are accurate as of the date/time indicated and are subject to change. Any price and availability information displayed on [relevant Amazon Site(s), as applicable] at the time of purchase will apply to the purchase of this product.)

(58)
$43.99 (as of June 29, 2022 10:08 GMT -05:00 - More infoProduct prices and availability are accurate as of the date/time indicated and are subject to change. Any price and availability information displayed on [relevant Amazon Site(s), as applicable] at the time of purchase will apply to the purchase of this product.)

Give Me More (Salacious Players' Club)

(3269)
$6.50 (as of June 29, 2022 10:08 GMT -05:00 - More infoProduct prices and availability are accurate as of the date/time indicated and are subject to change. Any price and availability information displayed on [relevant Amazon Site(s), as applicable] at the time of purchase will apply to the purchase of this product.)