It is a big, fat, tasty number. And when it was tossed out to Willie Jefferson for discussion, he responded instantly with a question of his own.

The Winnipeg Blue Bombers are on an astonishing run of late – a 9-0 start for the first time in these parts since the 1960 squad opened 10-0. Even more jaw-dropping is the club’s 22-1 home record, including playoffs, dating back to the end of 2018. That includes the current run of 13-straight wins at IG Field.

“Wait a minute,” began Jefferson in a chat with bluebombers.com this week. “My question is: who did we lose to again? Who gave us the ‘L’ in that 22-1 run?”

Well, for the record, that would be the Hamilton Tiger-Cats in a 33-13 victory back on September 27, 2019. That game featured Chris Streveler starting at quarterback for an injured Matt Nichols and came 12 days before the trade deadline deal that landed Zach Collaros from the Toronto Argonauts.

“I remember now,” said Jefferson. “That’s also the game Simoni (Lawrence, Ticats linebacker) set the record for tackles (with 17). But that’s a long time ago now, isn’t it?” 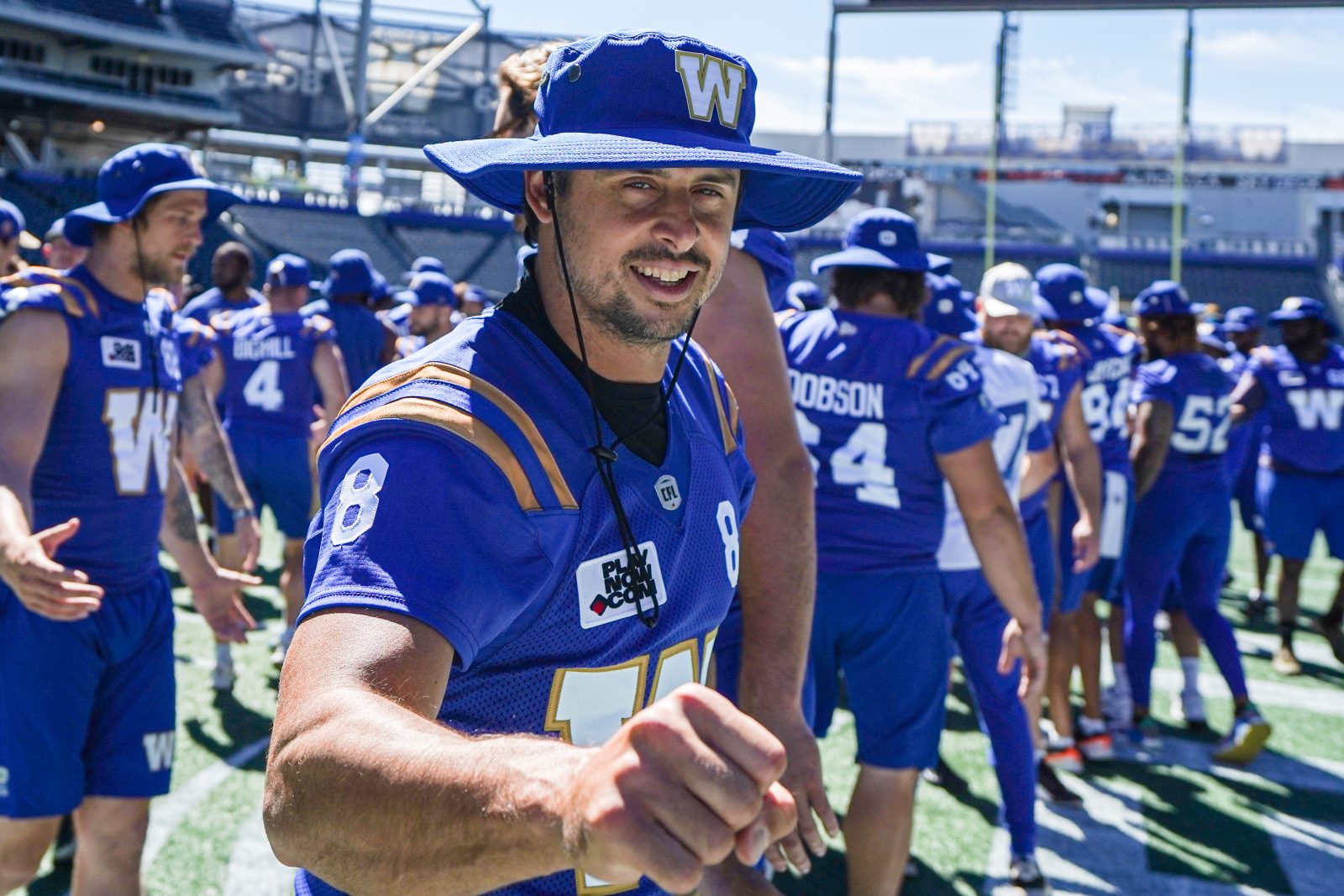 It is, and the current run at home will continue to remain the most compelling big-picture storyline for the Blue Bombers whenever they play at home until it comes to an end. Consider, after all, that the 22-1 stretch is second-best in franchise history, behind only a 27-1 run from 1983-86 at old Winnipeg Stadium. That era featured one Grey Cup championship – the 1984 title – while this one is part of back-to-back titles. 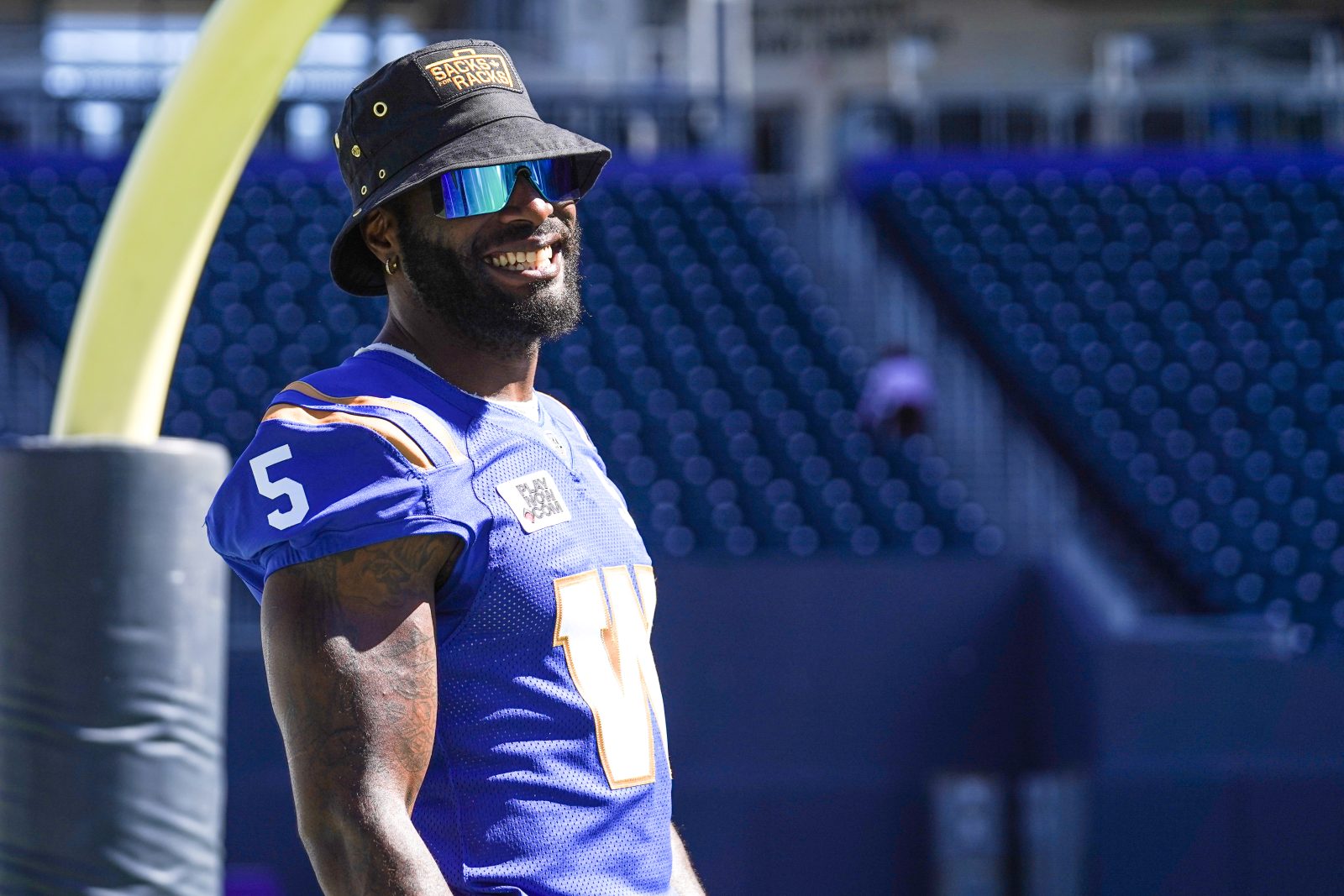 HOME IS WHERE THE WINS ARE

The Blue Bombers hardly christened IG Field in style when the building first opened in 2013. In fact, teams on losing streaks or in a funk generally found their cure in south Winnipeg, as the club didn’t post a winning season in the new facility in the first four years of its existence.

During a stretch from the opening game in 2013 through to the summer of 2016, the club was an abysmal 7-23 before the wins began to regularly pile up.

Since then, the club is 34-9 at home in the regular season.

Talent and continuity at the top are massive reasons for the turnaround. And Jefferson, who played here as an opponent with Edmonton and Saskatchewan before signing as a free agent with the Blue Bombers in 2019, offered up another factor as to why IG Field has become such a nasty place for opponents.

“They know (when an offence) is on second down to get more intense. Then on offence, you hear ‘And that’s another Winnipeg first down!’ They’re cheering when we make field goals, when we make big plays on special teams. It’s all around. Even before I was here and I was on the opposite side, it was always tough to play here.

“Plus, this is a great team. We give our all for the fans every time. But when you ask what’s the difference between other places and here and what makes winning different here, it’s the fans. You come out of the tunnel pre-game, it’s just different here.” 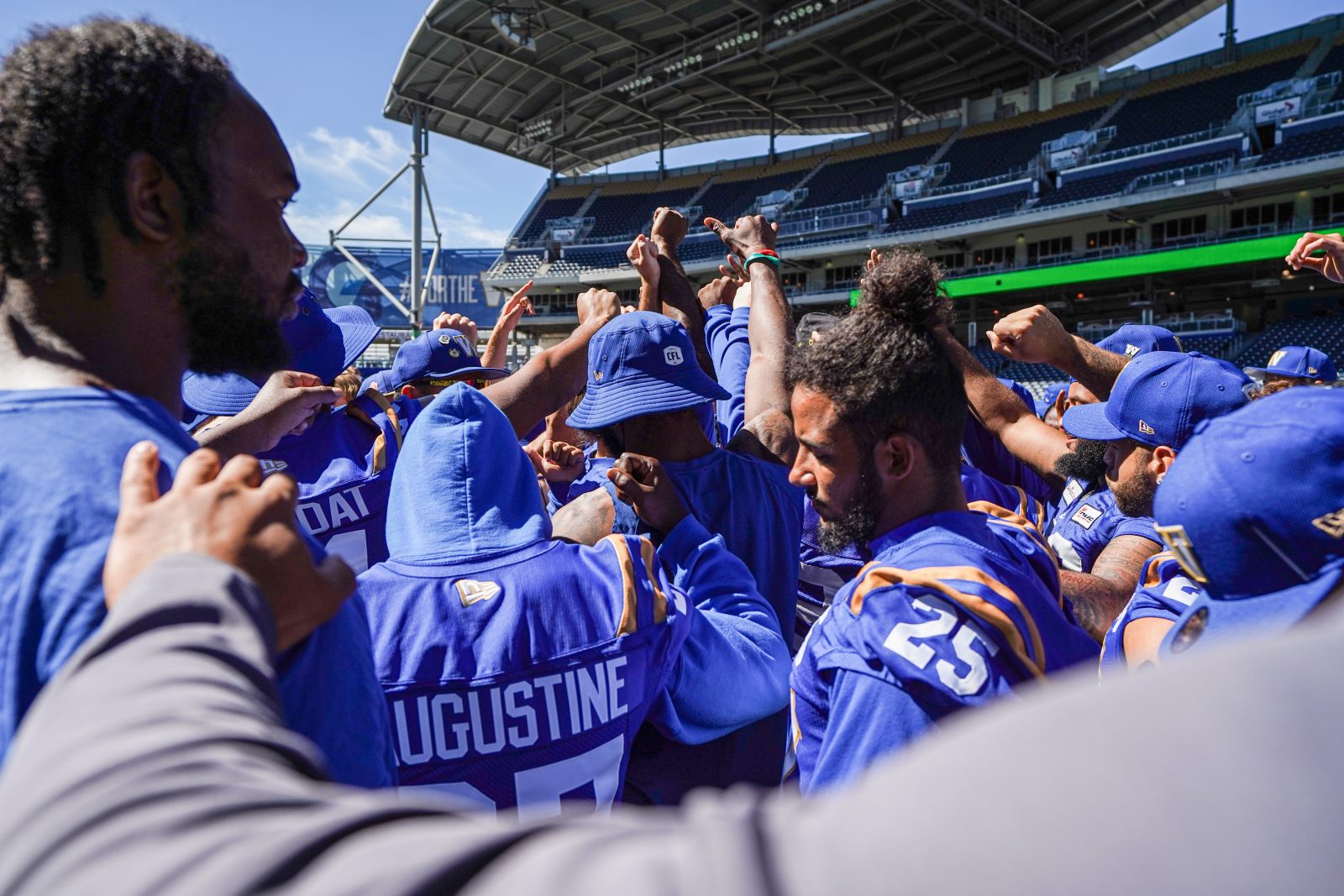 The Blue Bombers offence – just like the rest of the squad – has showcased multiple ways to beat teams this season, from quick strike passes, to deep shots, to grinding it out along the ground.

It’s all part of Buck Pierce’s multi-faceted offence that can take whatever approach necessary to help keep piling up the wins.

All that said, when the ground game is going – as it has been for the past three games – it just feels like the Blue Bombers attack fans have grown to know and love over the last few years.

Here’s the proof: dating back to 2016 and the arrival then of Andrew Harris in free agency, the Blue Bombers are 37-15 in games in which they rush for over 100 yards. The team is 11-1 over the last two years in those circumstances, including 4-0 this year. The Blue Bombers have found their ground game groove of late, rushing for an average of 156 yards over the last two games, after averaging 87 in their first seven.

“The running back and the guys up front will tell you once they see the running game going, they want to see us run the ball even more,” said Brady Oliveira. “Obviously the ball needs to get spread around, but when there’s a rhythm there those big boys up front want to call some inside zones (runs) and just get the pile moving. That chemistry with the O-line has been building over the last few games and it’s building every single week.

“It’s a great feeling. We’ve been known for the ground and pound and we’re starting to do that again with an efficient run game.” 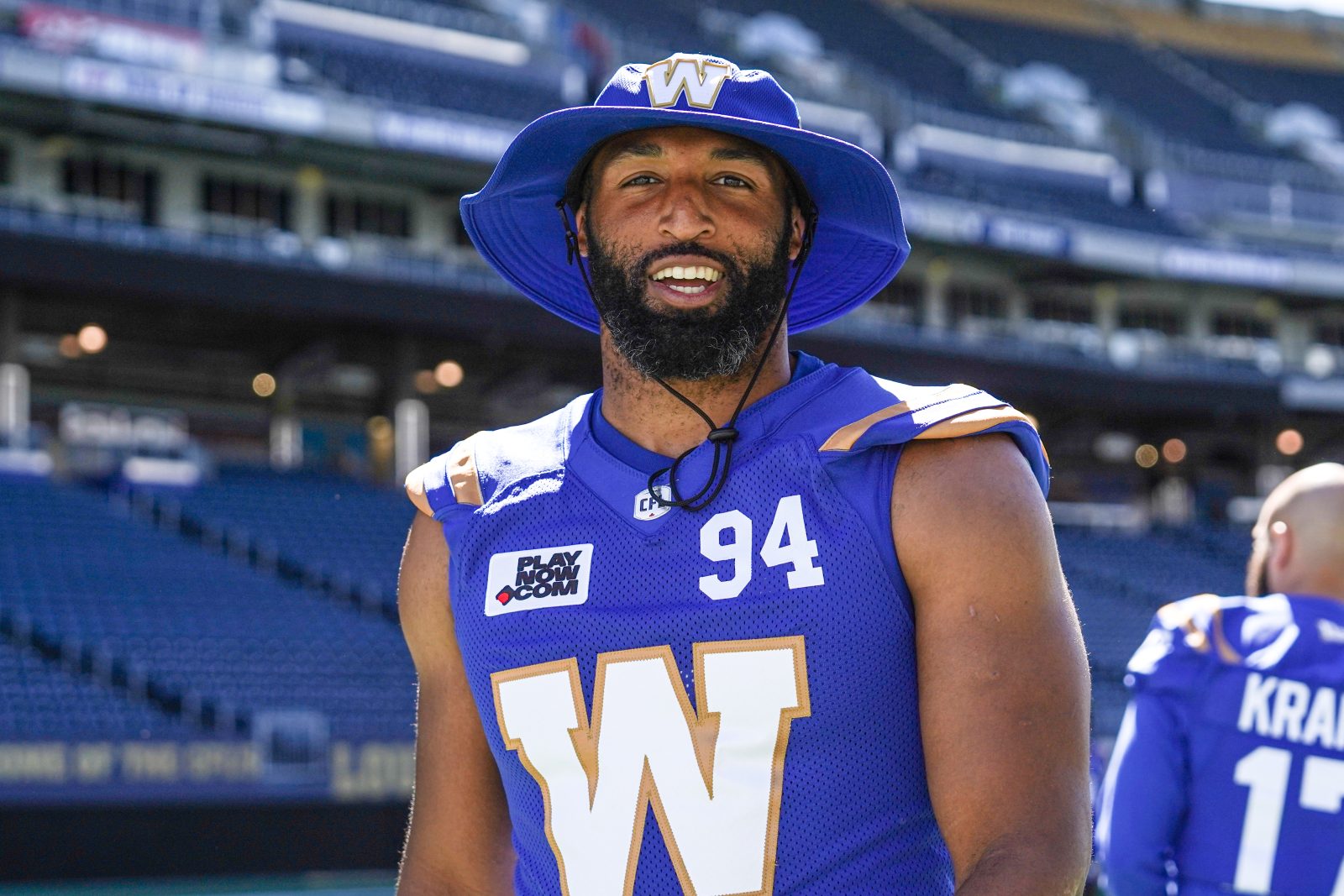 Back-to-back series are hardly new to the Blue Bombers and they continue to remain a unique aspect of the CFL and its nine-team schedule.

The Blue Bombers already swept their first home-and-home of the season with Week 1 and Week 2 wins over the Ottawa RedBlacks and will be looking to do the same Thursday against the Als. Coming up will be the annual Labour Day Classic/Banjo Bowl doubleheader with the Saskatchewan Roughriders before the regular season finishes with two straight against the B.C. Lions – although the Blue Bombers do enjoy a bye between those two meetings.

Critical in all this is to be able to adjust on the fly to new wrinkles – something the club did effectively in last week’s win over Montreal despite four turnovers.

“Noel (Thorpe, Alouettes defensive coordinator) had a really good game plan, as he always does,” said quarterback Zach Collaros. “I thought our offensive line did a good job of adjusting and trying to figure out where the pressure was coming from – it was stuff that we hadn’t been able to prepare for because it hadn’t been on film.

“It asked us to adjust on the fly and we have a really good group to do that. I fully expect for there to be new wrinkles tomorrow and we’re excited for the challenge.”

Winnipeg’s eight first-half possessions last week featured three punts, two interceptions, a fumble, a TD and a playing-out-the clock run before the intermission. The second half, meanwhile, featured three TDs, one pick and just one punt.

“We got a lot of pressure the other night and when you look at us as a unit, we weren’t on the same page all night,” said Pierce earlier in the week. “We didn’t execute the way we should have, and we left some plays out there. We have to understand teams are going to give us their best shot and their best opportunity and we’ve got to execute and play better each week. That’s the bottom line.”

(1475)
$26.97 (as of October 2, 2022 10:47 GMT -05:00 - More infoProduct prices and availability are accurate as of the date/time indicated and are subject to change. Any price and availability information displayed on [relevant Amazon Site(s), as applicable] at the time of purchase will apply to the purchase of this product.)

(38013)
$11.89 (as of October 2, 2022 10:47 GMT -05:00 - More infoProduct prices and availability are accurate as of the date/time indicated and are subject to change. Any price and availability information displayed on [relevant Amazon Site(s), as applicable] at the time of purchase will apply to the purchase of this product.)

(136882)
$15.20 (as of October 2, 2022 10:47 GMT -05:00 - More infoProduct prices and availability are accurate as of the date/time indicated and are subject to change. Any price and availability information displayed on [relevant Amazon Site(s), as applicable] at the time of purchase will apply to the purchase of this product.)

(9610)
$25.59 (as of October 2, 2022 10:47 GMT -05:00 - More infoProduct prices and availability are accurate as of the date/time indicated and are subject to change. Any price and availability information displayed on [relevant Amazon Site(s), as applicable] at the time of purchase will apply to the purchase of this product.)

(50165)
$41.99 (as of October 2, 2022 10:47 GMT -05:00 - More infoProduct prices and availability are accurate as of the date/time indicated and are subject to change. Any price and availability information displayed on [relevant Amazon Site(s), as applicable] at the time of purchase will apply to the purchase of this product.)