MONTREAL – They have become something of a physiological and psychological case study over the last few weeks, so much so that the rest of the Canadian Football League might want to consider taking some detailed notes.

The Winnipeg Blue Bombers will play their sixth game in 32 days here in La Belle Province Thursday night against the Montreal Alouettes, and that stretch includes five road trip with two sets of games coming five days apart in addition to the schedule featuring stops at the opposite ends of the CFL map in Vancouver and Montreal.

And through it all there’s been nary a peep from Bomberland on the grind – or the fact that they will be the last team in the Canadian Football League to enjoy a bye – with their first break not coming until after next week’s home rematch with the Alouettes at IG Field.

Banged up physically and mentally fatigued? No doubt.

But as head coach Mike O’Shea would often preach to his troops in any difficult circumstances: ‘It’s perfect.’ 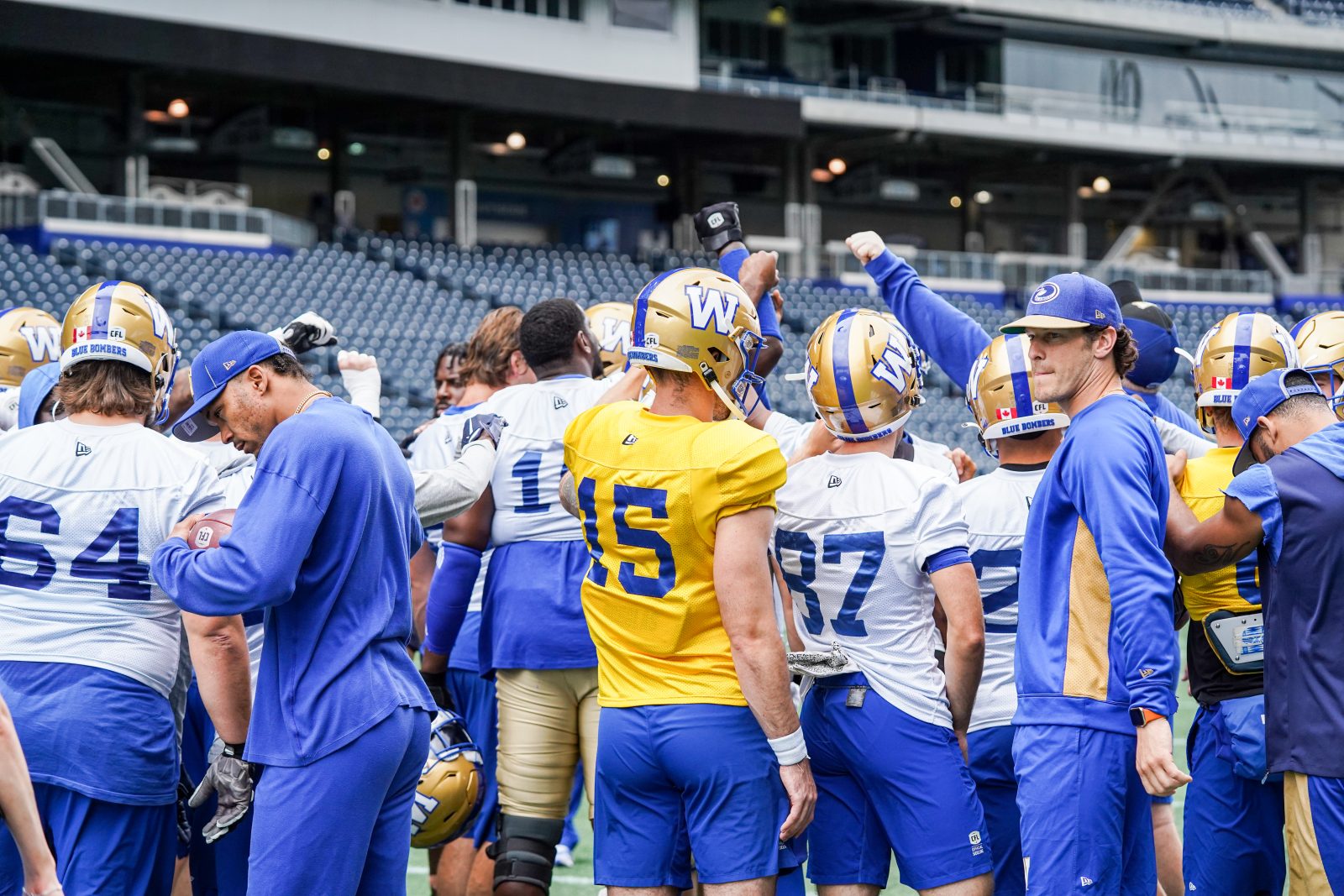 The Blue Bombers had just one practice after last Saturday’s rock-solid win over the Calgary Stampeders and then were on the plane again on Wednesday to Montreal. This game will conclude a stretch that will see the club play three straight road games.

The silver lining to all this? Winnipeg will have three bye weeks in the second half of the CFL season, coming in Week 11, Week 16 and Week 20.

“The guys have a great understanding of how to handle a pile of different situations,” O’Shea added, when asked this week if the club had to ‘dig deep’ during the last part of this grind.

“They’ve been building this for a number of years, so it just kind of rolls along. I’m not sure if it’s digging deeper than any other week. If you don’t play your best somebody’s going to beat you no matter what. Byes, the time off, days off… all that stuff doesn’t really enter a lot of discussion.” 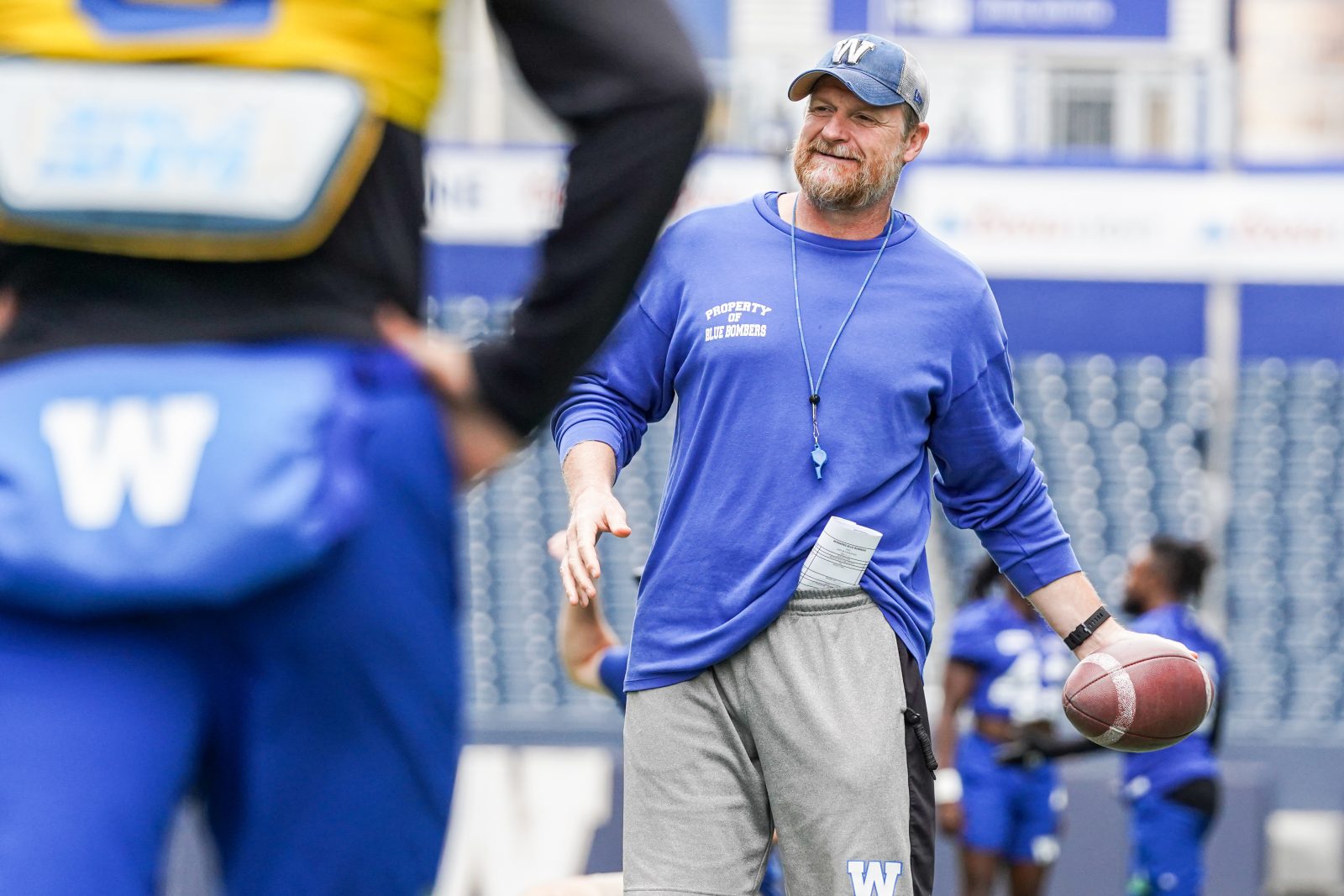 1. GRITTING THROUGH THE GRIND

The 2022 season opened with CFL All-Star safety Brandon Alexander on the injured list and likely not ready to be activated until September. His replacement, Malcolm Thompson, will miss his second straight against the Alouettes.

Over the course of the last few weeks they’ve lost centre Michael Couture to an arm injury, while Kyrie Wilson is gone for the season with an Achilles. Greg Ellingson will miss his third straight this week, Nic Demski was absent for four games before returning while Jackson Jeffcoat, who has missed three games, will be back opposite Willie Jefferson at defensive end.

And yet they keep finding a way to grind out wins.

“I’m not saying it’s easy and I’m not saying some of the guys on the team don’t feel like that. But I feel with the vets we have in the locker room and the coaches and the staff and everybody around here, once you walk into the building you get there and shake it off.

“The coaches push you to want to be better every day. Your teammates push you along when practice starts and when we get into meetings and it’s time to lock in and focus up and attack the task for the day, we pick each other up. That’s something we do every day. We all try to keep each other motivated and optimistic as much as possible.” 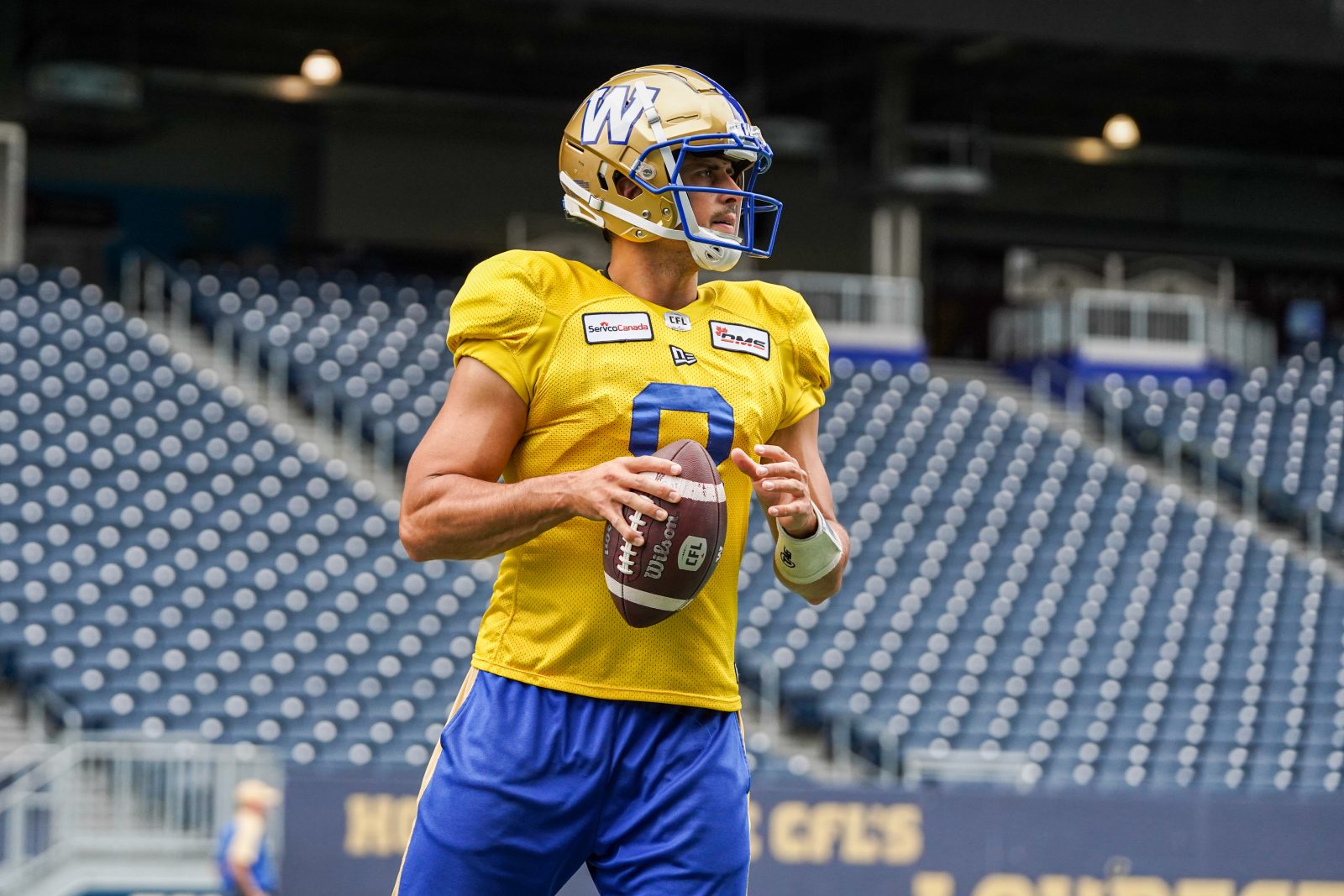 2. GROUND AND POUND, SLICE AND DICE

The Blue Bombers are coming off their most balanced offensive output of the season, rushing for a season-high 160 yards along the ground and with Zach Collaros throwing for 270 yards and four touchdowns through the air in the eye-popping win over the Stamps.

The 160 yards rushing was a season high and was critical to the club owning the line of scrimmage – a massive part of their identity over the past six seasons.

“As much as a cliché as it is, football is about establishing the line of scrimmage with the O-line and the D-line and allowing those guys to be aggressive and enforce their will when they can – especially in three-down football,” said Blue Bombers offensive coordinator Buck Pierce. “Having the ability to run the ball is an emphasis for us every week and we’re continuing to try and improve at it. It was good for the guys to be able to go out there and show some physicality.

“As a play caller it allows you to get to more plays and mix things up a little bit more because you’re not in second-and-long situations and you can call some different things. When you’re getting first downs and any time you can run the football it’s a good thing.”

Winnipeg got the huge production from Brady Oliveira, who had 110 yards on 15 carries, but each of Dakota Prukop’s five runs converted second or third-down situations while Janarion Grant ran for 20 yards on his one carry and Zach Collaros’ lone run covered nine yards.

Worth pointing out here is this: Montreal is surrendering an average of 107 yards rushing per game second-worst in the CFL to the Edmonton Elks. 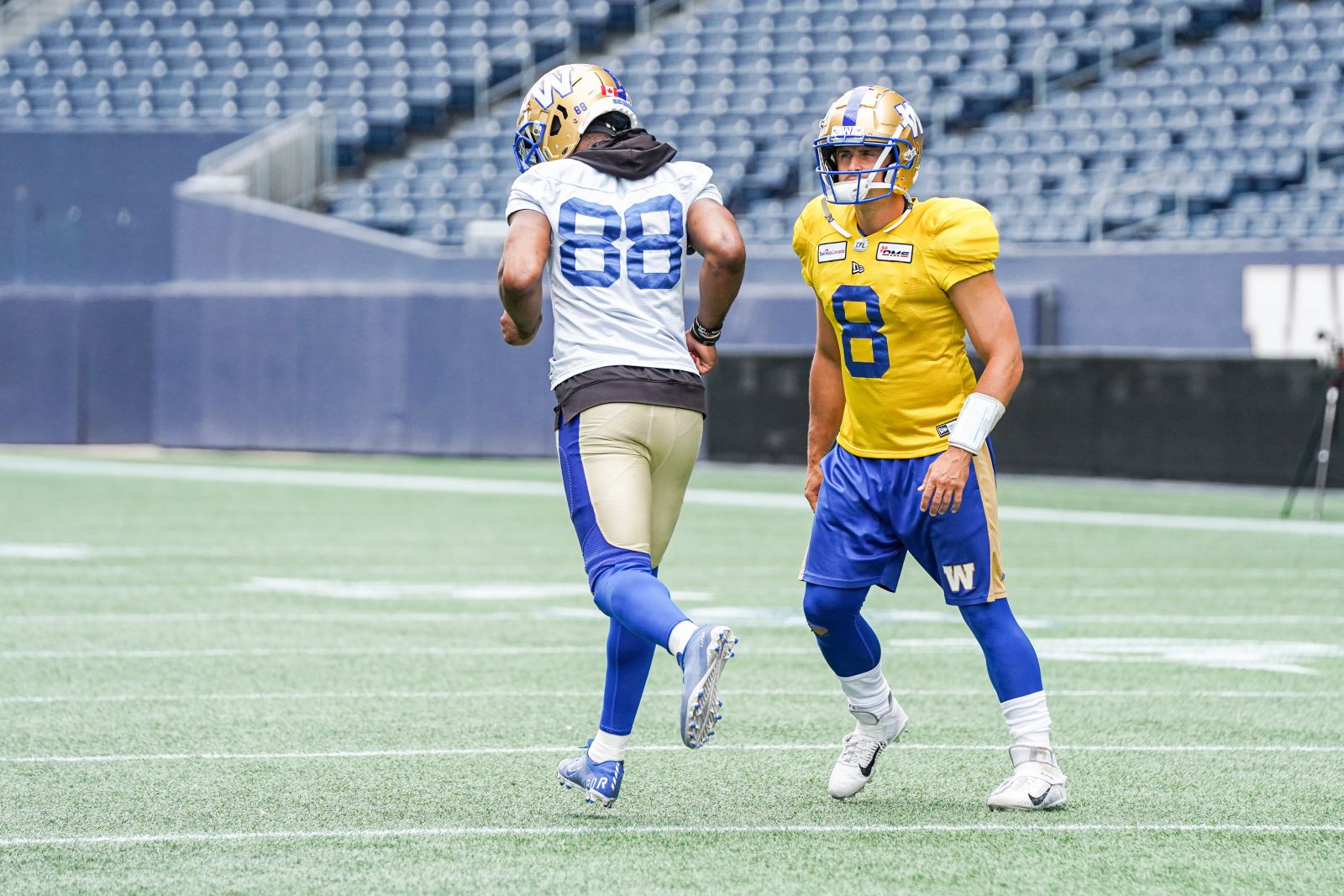 3. ALL HANDS ON DECK

So much of the Blue Bombers’ 8-0 run to start the ’22 season can be attributed to the club’s star power, no question, but a huge chunk of the success comes from the depth of the roster and how it is used.

The Blue Bombers use a ton of personnel packages on defence, have superb special teams and have had any number of offensive players each take their turn contributing. That’s become the trademark of this team in its two Grey Cup championship runs and it was something O’Shea referenced on Tuesday.

“That was a really clean game, and everybody had a hand in us winning,” he said of the win over Calgary. “That’s what you’d like every week. You have to take the stats out of it because in every win a lot of guys participate and contribute to every win and it might not show up. It just so happened that in this game a lot of guys showed up on the stats sheet.”

O’Shea saluted the work of Drew Wolitarsky and Rasheed Bailey, both for their work as receivers, but also the dirty work of blocking. Again, whatever it takes – including Thursday against the Als.

“When you look at the film you really enjoy watching it,” said O’Shea. “And I do think that post-game when everybody feels that they contributed it’s a better feel and there’s just a little more joy in the locker room when you play a really tough opponent, and everyone feels like they had a hand in it.”

(5534)
$35.15 (as of September 24, 2022 10:44 GMT -05:00 - More infoProduct prices and availability are accurate as of the date/time indicated and are subject to change. Any price and availability information displayed on [relevant Amazon Site(s), as applicable] at the time of purchase will apply to the purchase of this product.)

(27133)
$29.99 (as of September 24, 2022 10:44 GMT -05:00 - More infoProduct prices and availability are accurate as of the date/time indicated and are subject to change. Any price and availability information displayed on [relevant Amazon Site(s), as applicable] at the time of purchase will apply to the purchase of this product.)

(14756)
$12.56 (as of September 24, 2022 10:44 GMT -05:00 - More infoProduct prices and availability are accurate as of the date/time indicated and are subject to change. Any price and availability information displayed on [relevant Amazon Site(s), as applicable] at the time of purchase will apply to the purchase of this product.)

(136472)
$17.91 (as of September 24, 2022 10:44 GMT -05:00 - More infoProduct prices and availability are accurate as of the date/time indicated and are subject to change. Any price and availability information displayed on [relevant Amazon Site(s), as applicable] at the time of purchase will apply to the purchase of this product.)

(6640)
$16.00 (as of September 24, 2022 10:44 GMT -05:00 - More infoProduct prices and availability are accurate as of the date/time indicated and are subject to change. Any price and availability information displayed on [relevant Amazon Site(s), as applicable] at the time of purchase will apply to the purchase of this product.)