You Are Here Home news 7 years after abandoning the penny, are Canadians ready to scrap the nickel too? 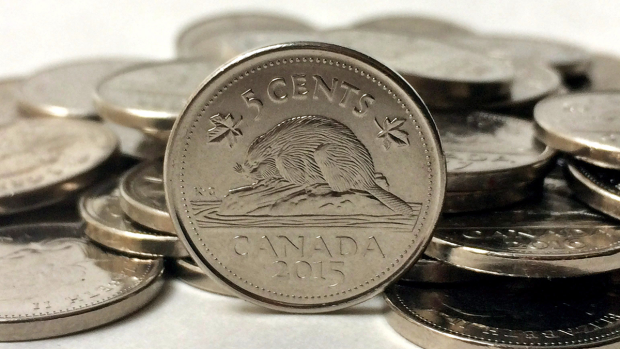 VANCOUVER — Seven years after ditching the penny, it appears most Canadians are on board.

A poll by Vancouver-based Research Co. suggested that, of those surveyed, about 75 per cent agree with the decision to take the penny out of circulation back in 2013.

When broken down by age, respondents under 34 were the largest support base.

Support for scrapping the one-cent coin was highest in Alberta, where 78 per cent of those asked said they were happy with the choice.

But of the 1,000 adults surveyed online late last month, some said they were against it.

Opposition was highest on Canada’s coasts and in its most populous province. One-in-five Maritimers, British Columbians and Ontarians polled said they moderately or strongly disagreed.

Respondents were also asked whether they’d like to get rid of the nickels in their wallets, but the idea appeared to be less popular.

Across Canada more than a third would be willing to lose it, but 55 per cent said they’d like to keep the coin.

Those most attached to the nickel were residents of Saskatchewan and Manitoba, Atlantic Canada, Ontario and B.C.

Three years ago, financial group Desjardins predicted the end of the nickel within five years following results of a study into how Canadians use cash.

The report was a follow to a study the group conducted about a decade ago, which went further, suggesting Canada also consider getting rid of the $5 bill.

In 2008, Desjardins advised getting rid of the penny first, then the nickel. The report also called for the elimination of Canada’s smallest bill, but recommended introducing a $5 coin instead.

Following the 2016 report, an internal federal analysis showed the government had studied the pros and cons of the nickel, but Ottawa insisted at the time it had no plans to take the coin out of circulation.

COVID Alert, federally backed contact tracing app, hints at what Manitobans may be able to expect

Province suggests evacuation of 30 to 40 homes in Rivers, Man. due to lack of confidence in dam