TORONTO — Prince Philip, the husband of Queen Elizabeth II and the longest-serving British consort, has died at the age of 99 years old.

On Friday, Buckingham Palace released a statement announcing his death.

“His Royal Highness passed away peacefully this morning at Windsor Castle,” the statement read. “The Royal Family join with people around the world in mourning his loss.”

The Royal Family added that further announcements will be made in “due course.”

The Duke of Edinburgh had a successful career in the British Royal Navy where he saw active service in the Second World War. He was the patron of more than 780 organizations and he was involved in hundreds of charitable endeavours.

His most prominent role, however, was that of a dedicated husband who supported his wife as she served as head of the Commonwealth since 1952.

Born the Prince of Greece and Denmark on June 10 1921, Prince Philip had a tumultuous childhood.

The great-great-grandson of Queen Victoria was born on a dining room table on the Greek island of Corfu to his mother Princess Alice of Battenberg and his father Prince Andrew of Greece.

Although he was born in Greece, Prince Philip’s family had to flee the country when he was only 18 months old in 1922. His uncle, the King of Greece, Constantine I, had been forced to abdicate in the aftermath of the Greco-Turkish War and the family feared for their safety.

Prince Philip’s uncle King George V ordered a British Royal Navy ship to collect them and the baby prince was carried to safety in a makeshift cot constructed from an orange box. 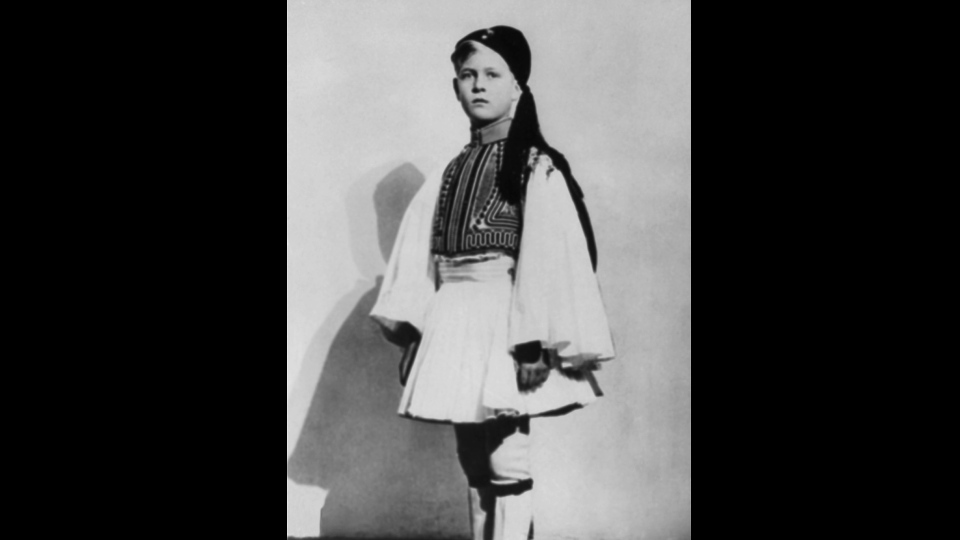 In this 1930 file photo Prince Philip of Greece, now the Duke of Edinburgh, and husband of Queen Elizabeth II, poses in Greek costume, at an unknown location.(AP Photo, File)

The family settled in the south of France until his parents’ separation in 1930. Prince Philip’s father moved to Monte Carlo with his mistress and his mother was diagnosed with schizophrenia during this time. She was later institutionalized in Germany.

During this period, the prince’s four older sisters married German noblemen and moved to Germany to be with them.

As for the nine-year-old prince, he was sent to England to be raised by his maternal grandmother Victoria Mountbatten, the Marchioness of Milford Haven. Over the next nine years, he attended several boarding schools in England, Germany, and Scotland before graduating in 1939.

The young prince grew accustomed to his unsettled life as he moved from home to home, royal biographer Hugo Vickers said.

“He was always living in someone else’s house, but he, of course, doesn’t think that’s so unusual because unlike the rest of us, who are used to a stable home, he never knew anything different,” Vickers told CTV News.

As a schoolboy, Prince Philip developed a reputation as a lonely student who hid his royal heritage.

After he left school at the age of 18, Prince Philip joined the British Royal Navy as a cadet in 1939, just before the Second World War.

A few years later, Prince Philip became a First Lieutenant of the HMS Wallace at the unusually young age of 21. 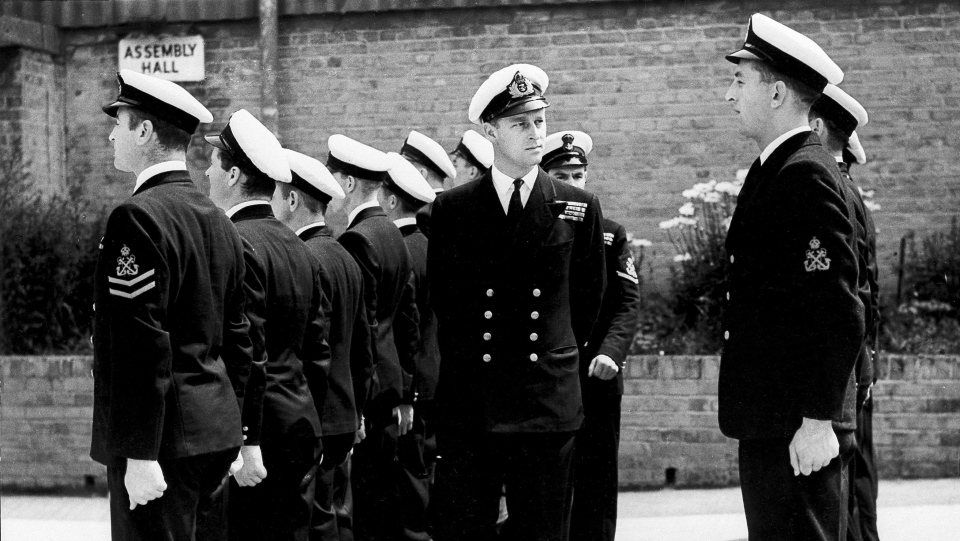 In this July 31, 1947 file photo, Lieut. Philip Mountbatten, as he was then called, center, inspects his men at the Petty Officers’ Training Center at Corsham, England.(AP Photo/File)

During the Second World War, he saw active service in the Indian Ocean and the Mediterranean for six years as a member of the British Royal Navy. His brothers-in-law fought on the opposing side for Germany.

As a First Lieutenant of the HMS Whelp, Prince Philip was present in Tokyo Bay when the Japanese surrendered in 1945.

In 1952, Prince Philip was promoted to Commander, but he left the navy early when his father-in-law King George VI died later that year.

Before Prince Philip distinguished himself in the military, his life took a turn when he met his future wife and the future Queen.

In 1934, when Prince Philip was 13 years old, he met his third cousin Queen Elizabeth II – then known as Princess Elizabeth – at his cousin’s wedding when the princess was only eight years old.

The young princess was smitten and their love blossomed during the Second World War.

Two years after the war, King George VI gave Prince Philip permission to marry his daughter despite concerns that he was foreign-born. Prince Philip renounced his Greek title and became a naturalized British subject and the King gave him the title of Duke of Edinburgh.

In November 1947, Prince Phillip and Princess Elizabeth were married in Westminster Abbey in a ceremony attended by 2,000 guests and broadcast by BBC Radio to 200 million listeners around the world. 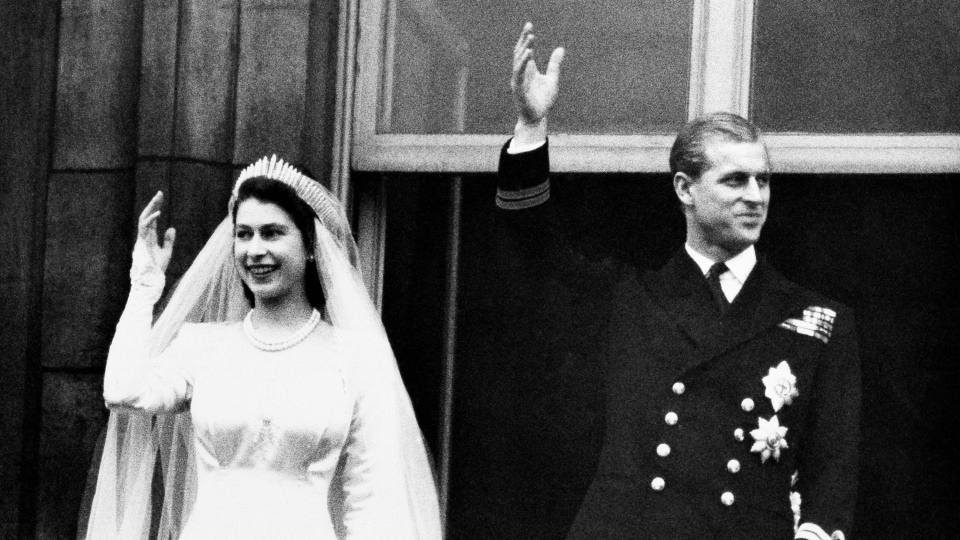 In this Nov. 20, 1947 file photo, Britain’s Princess Elizabeth and Prince Philip wave to the crowds on their wedding day, from the balcony of Buckingham Palace in London.(AP Photo/File)

Five years later, when King George VI died at the age of 57 and a 25-year-old Elizabeth II ascended the throne, Prince Philip’s life changed forever. He gave up his professional naval career to accompany the Queen in her new public role and he would spend the next 69 years as a constant presence by her side.

A LIFE OF ROYAL DUTY

The Duke of Edinburgh adapted quickly and capably to his work in support of the Queen. He accompanied her on countless royal visits and tours where he gained a reputation for his unexpected and blunt remarks.

Or in 1981, when he said “Everybody was saying we must have more leisure. Now they are complaining they are unemployed” during the recession.

Despite his offensive outbursts, Prince Philip never apologized for his remarks and his public duties were never scaled back by the Palace.

“I can’t change the way I react to things,” he explained. “That’s part of, that’s somebody style and that’s just too bad.”

Royal biographer Hugo Vickers said the duke was not always an “easy man” to be around.

“He was quite abrupt sometimes. He’s not given to small talk, but he’s straightforward. You always know where you stand with him, even if it’s in trouble,” Vickers said. 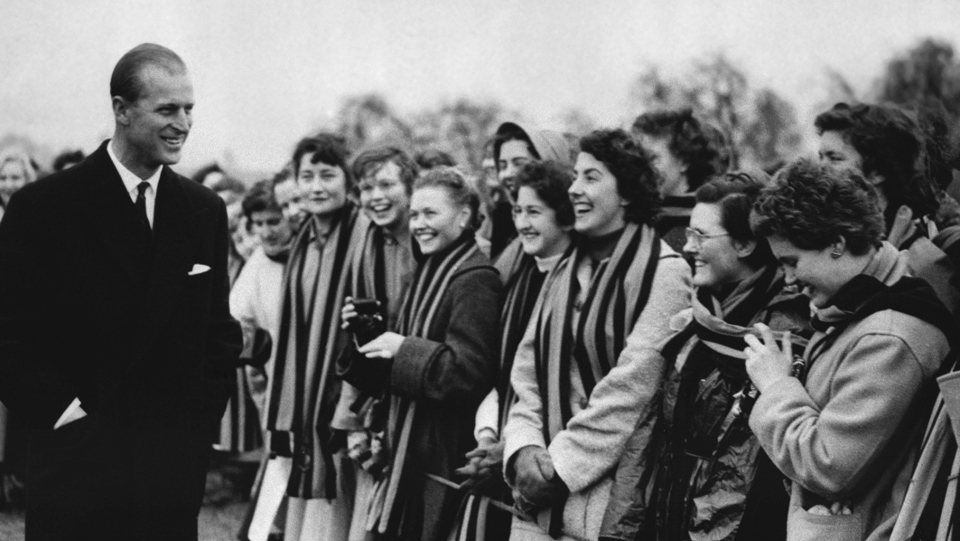 In this March 10, 1957 file photo, Prince Philip is greeted by some of the students of St. Mary’s College, in Cheltenham, England, as he left the playing fields of St. Paul’s College (AP Photo/File)

“I don’t think he changed at all,” CTV royal commentator Richard Berthelsen said. “As he got older he probably tolerated less censoring, less editing.”

Nevertheless, Prince Philip remained a dedicated husband to the Queen and played an active role in his public duties. He was the patron or president of 780 organizations, including The Duke of Edinburgh’s Award, which he founded in 1956. The award operated in more than 140 countries and celebrates young people serving in their communities.

Throughout his life, Prince Philip displayed a keen interest in a variety of subjects, including conservation, engineering, sport, and the military.

After attending countless engagements at the Queen’s side and more than 22,000 appearances on his own, the Duke of Edinburgh retired from public life in May 2017.

He had, however, made occasional public appearances since to attend royal weddings, including the nuptials of his grandson Prince Harry in May 2018, as well as several birthday and anniversary celebrations.

In January 2019, the Duke of Edinburgh caused a flurry of concern after he was involved in a collision that left two women injured, although not seriously. The royal was behind the wheel of a Land Rover near the family’s Sandringham Estate in eastern England when he smashed into another vehicle.

Prince Philip later explained that the sun was in his eyes while he was driving. Although he was not charged in the incident, he did give up his driver’s licence.

The highly publicized crash wasn’t the only time the Duke of Edinburgh’s health was a cause for concern in recent years. The aging royal had been in and out of hospital numerous times over the past decade for a recurrence of a bladder infection. In 2011, he had an operation to clear a blocked artery in his heart after suffering chest pains and he was hospitalized for 10 days for a hip replacement in 2018. A year later, he spent four nights in hospital for what the palace said was a planned treatment for a pre-existing condition.

On Feb. 17, 2021, the 99-year-old royal was admitted to the private King Edward VII Hospital in London as a “precautionary measure” after feeling unwell, according to Buckingham Palace. Nearly two weeks later, he was transferred to a specialized hospital in London to undergo testing and observation for a pre-existing heart condition.

In early March, Prince Philip underwent a procedure for that pre-existing heart condition at a London hospital.

Before he was admitted to hospital, Prince Philip and the Queen had been living in Windsor Castle, located approximately 40 kilometres west of London, during the COVID-19 pandemic. Due to the cancellation of official ceremonies and engagements, the couple’s time spent in lockdown together marked the longest period they were in the same place at the same time in their married lives – more than 73 years. 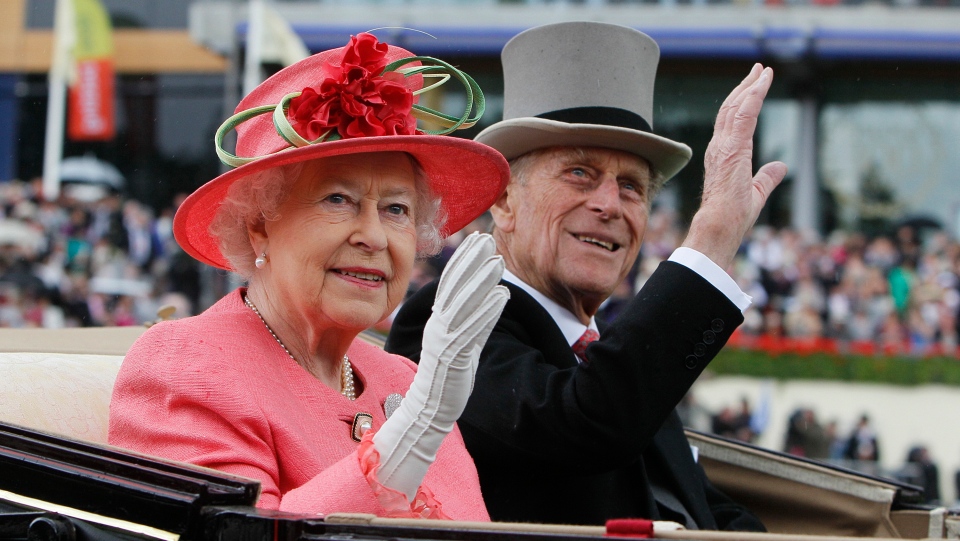 Prince Philip was the longest-serving British consort and he and the Queen became the first couple in the Royal Family to celebrate their diamond wedding or 60th anniversary.

As a steady figure in the Royal Family for more than half a century, Prince Philip’s contribution to the monarchy was perhaps best summed up by the Queen herself.

“He is someone who doesn’t take easily to compliments,” she said during a lunch to mark their 50th wedding anniversary in 1997. “He has, quite simply, been my strength and stay all these years, and I, and his whole family, and this and many other countries, owe him a debt greater than he would ever claim or we shall ever know.”

It is with deep sorrow that Her Majesty The Queen has announced the death of her beloved husband, His Royal Highness The Prince Philip, Duke of Edinburgh.

His Royal Highness passed away peacefully this morning at Windsor Castle. pic.twitter.com/XOIDQqlFPn

(2235)
(as of May 8, 2021 - More infoProduct prices and availability are accurate as of the date/time indicated and are subject to change. Any price and availability information displayed on [relevant Amazon Site(s), as applicable] at the time of purchase will apply to the purchase of this product.)

(14886)
(as of May 8, 2021 - More infoProduct prices and availability are accurate as of the date/time indicated and are subject to change. Any price and availability information displayed on [relevant Amazon Site(s), as applicable] at the time of purchase will apply to the purchase of this product.)

(12879)
(as of May 8, 2021 - More infoProduct prices and availability are accurate as of the date/time indicated and are subject to change. Any price and availability information displayed on [relevant Amazon Site(s), as applicable] at the time of purchase will apply to the purchase of this product.)

(147)
(as of May 8, 2021 - More infoProduct prices and availability are accurate as of the date/time indicated and are subject to change. Any price and availability information displayed on [relevant Amazon Site(s), as applicable] at the time of purchase will apply to the purchase of this product.)

(14886)
(as of May 8, 2021 - More infoProduct prices and availability are accurate as of the date/time indicated and are subject to change. Any price and availability information displayed on [relevant Amazon Site(s), as applicable] at the time of purchase will apply to the purchase of this product.)