You Are Here Home news Abducted, forced into marriages, and escaping with their lives: Ugandan woman share stories of surviving war 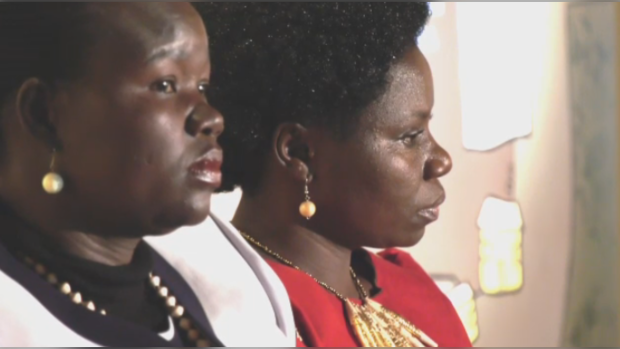 It was over 20 years ago when Grace Acan, only 16-years-old at the time, was abducted from her Ugandan boarding school and forced to live in captivity – facing conjugal slavery, forced labour, and sexual violence at the hands of her captors.

Acan is sharing her story, along with others who survived these traumas, in a new exhibit at the Canadian Museum for Human Rights.

‘Ododo Wa: Stories of Girls in War’ opened at the CMHR on Wednesday afternoon. The exhibit’s displays – including the bullet-riddled skirt of an abducted girl, and the hand-drawings of life in a rebel camp – all tell the stories young girls caught in war.

‘Ododo Wa’ means “our stories” in the Luo languages of northern Uganda, and for Acan it’s important their stories are shared.

“When something is not often talked about, that is the most painful thing. So I choose to talk about it, so that it is known and we can do something about it, so we ensure it doesn’t happen again,” Acan said at the opening of the exhibit.

Acan was among the 138 girls abducted from St. Mary’s College Aboke in October 1996. She was joined at the opening by Evelyn Amony, another survivor of war. Amony was 11 when she was abducted and held in captivity by the Lord’s Resistance Army for 11 years. She was forced to marry their leader, Joseph Kony when she was 14.

Both woman spoke with CTV’s Maralee Caruso on Tuesday.

“Life in the bush was not easy at all, because everything went through you. The rape – they forced me to be with the men when I was too young – it is not easy at all having a baby when I was 14-years-old,” Amony told Maralee during an interview.

Both women were among tens of thousands of children abducted at the time by the rebel army, CMHR said in a news release.

“Both boys and girls received military training and were forced to carry heavy loads of ammunition and supplies through bush and over mountains, walking for days on end with little food and water,” the CMHR news release said.

The museum said girls like Amony and Acan not only served as soldiers and labourers but were forced to act as wives to the military commanders and bear their children.

“There is no way out – it was just by the luck from God that you survive,” Acan said. “It’s a horrible life and a horrible time to spend, especially at that early age.”

Acan said her life was never guaranteed. She was never sure she would survive, or if she would ever be able to see her people again.

After eight years in captivity, Acan said there was a massive attack at the base in which she was being held. The group was forced to move across South Sudan into Uganda. In the commotion, Acan said she was able to slip away to freedom.

Amony said her escape was similar. The Ugandan government attacked the LRA in South Sudan, and forced the notorious rebel group to move in Uganda.

“It was not easy to come back home. On my way, I was ambushed – that day was terrible,” Amony said, who was pregnant at the time. “ Many people died, but the God helped me be safe, even though many that day tried to kill me.”

Acan and Amony escaped and in 2008 established the Women’s Advocacy Network which advocates for children born in captivity. The woman are now sharing their stories in the new exhibit.

You can visit the ‘Ododo Wa: Stories of Girls in War’ exhibit at the CMHR until November 2020.