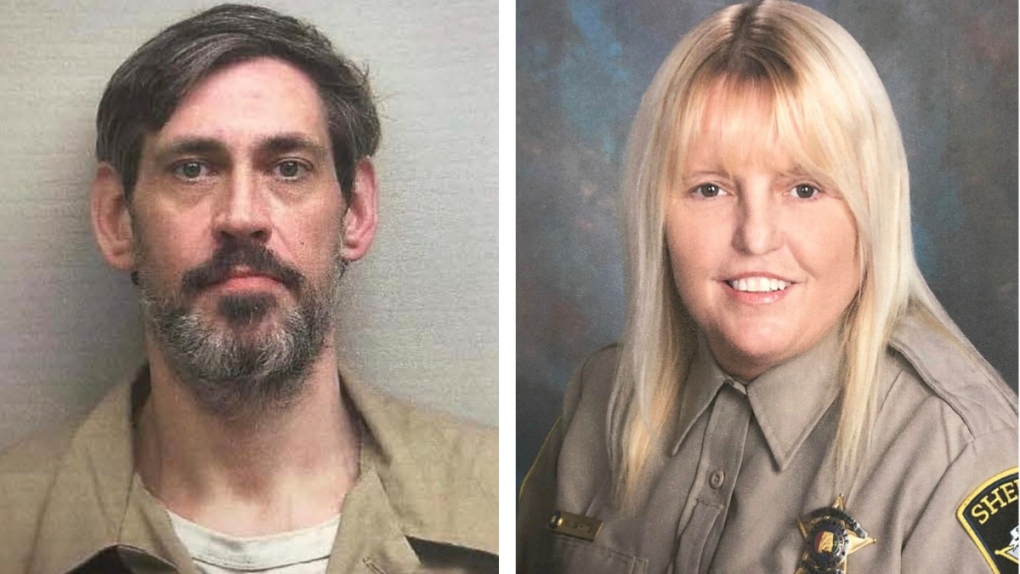 She was hospitalized earlier with self-inflicted gunshot wounds after being taken into custody following a car chase in Evansville, Indiana, US Marshals previously told CNN. Her wounds were “very serious,” Wedding said at the time.

No law enforcement officers fired shots, according to Sheriff Rick Singleton of Lauderdale County, Alabama, where the pair — who are not related — fled on April 29.

Before the chase ensued, officers conducting surveillance spotted Vicky White exiting a hotel with a wig on, according to US Marshal Matt Keely. Then, she and Casey White got into a car and drove away.

Authorities continued to watch them until a vehicle pursuit began, ending when a U.S. Marshals task force member drove a vehicle into the Cadillac the pair were in. The car wrecked and rolled over, he said. Casey White was driving the car, according to the U.S. Marshals, though Wedding had earlier told reporters Vicky White was the driver.

Officers were able to remove the inmate from the wrecked car, but Vicky White was pinned inside with a gunshot wound to her head, Keely said.

Casey White reportedly told officers, “Ya’ll help my wife, she shot herself in the head and I didn’t do it,” according to Keely. Keely said, to their knowledge, Casey White and Vicky White are not married.

The pair’s capture brought to a close an 11-day manhunt that gained widespread national attention and saw hundreds of tips flood in from all corners of the country, including one that ultimately lead to the location and arrest of the fugitives.

Wedding said the duo were believed to have been in Evansville since May 3. “It’s hard to believe they’ve been here that many days, but we’re lucky that we stumbled upon them today,” he said.

Singleton said Casey White, 38, will be brought back to Alabama. The inmate faces previous murder charges. Vicky White, 56, was first charged with permitting or facilitating escape in the first degree and was later facing additional forgery and identity theft charges.

“He will be in a cell by himself,” Singleton said. “He will stay in handcuffs and shackles while he’s in that cell and if he wants to sue me for violating his civil rights, so be it. He’s not getting out of this jail again. I’ll assure you that.”

Singleton said, “I’ve always expected this outcome. I knew we would catch them. It was just a matter of time.”

Most escapes from a county jail are spontaneous, he said.

“This escape was obviously well planned and calculated,” Singleton said. “A lot of preparation went into this. They had plenty of resources, had cash, had vehicles, had everything they needed to pull this off, and that’s what made this last week and a half so challenging. We were starting from ground zero, and not only that, we started — they got a six-hour head start on us.”

Earlier Monday, US Marshals released photos of who they believe was Casey White caught on a surveillance camera at an Evansville car wash.

It was the first time since he escaped a Lauderdale County detention centre with Vicky White that he was reported seen.

Vicky White was not seen in the photos.

Investigators were notified Sunday night that a 2006 Ford F-150 had been discovered at a car wash in Evansville, about 175 miles north of Williamson County, Tennessee, where the 2007 Ford Edge the pair had been traveling in was found abandoned.

The owner provided the images from a security camera, US Marshals said in a release.

Marshals went to Indiana following up on the tip, the agency said.

Before she died, Vicky White was facing new forgery and identity theft charges in Alabama, in addition to the charge of permitting or facilitating escape in the first degree that was filed last week.

The new charges were announced Monday and stemmed from the officer using an alias to purchase the vehicle used in the escape, a 2007 Ford Edge, officials said.

Vicky White, who was an assistant director of corrections for Lauderdale County, took Casey White from the county jail on April 29, saying she was taking him for a mental health evaluation, which authorities learned later had never been scheduled. She then said she was going to get medical care after dropping the inmate off because she wasn’t feeling well.

Vicky White’s use of aliases may have complicated the search, Singleton said Monday.

“If she was using her own identity, that would make it fairly easy for us to maybe find her,” Singleton told CNN’s Bianna Golodryga. “We do know she used a false identification to purchase a car here locally.”.

Before Vicky White’s death, Singleton said he hoped she would survive her injuries.

“We don’t wish any ill will on Vicky, but she has some answers to give us,” he said. “I have every bit of trust in (her). She had been an exemplary employee. I don’t know if we’ll ever know” what happened to change that.

Surveillance video footage of Vicky White taken before the getaway showed the level of preparation that went into the escape, Singleton said.

Investigators found footage of White shopping for men’s clothes at a department store and at an “adult store,” Singleton said, adding she “obviously had a change of clothes” for the inmate.

“It just tells us that it was very well planned and calculated,” Singleton said. “Obviously she well-planned this escape down to a T.”

Investigators earlier released video footage showing Vicky White at a Quality Inn in Florence, where she stayed the night before the escape more than a week ago.

The patrol car the officer and inmate took from the jail was found abandoned in a shopping centre parking lot. Vicky White’s jail keys, radio and handcuffs were found inside. Authorities believe the pair left the lot in a different vehicle: Vicky White’s 2007 Ford SUV she parked in the lot the night before.

The vehicle was spotted on May 6 at a Tennessee tow lot. The car had been abandoned in the woods without any identifying information on the same day the duo escaped, indicating they drove about two hours north from the jail in Florence to Williamson County, Tennessee.

Authorities believe the vehicle may have had mechanical problems that prompted the abrupt stop in the area.

Vicky White and Casey White had known each other since at least 2020, the sheriff told CNN earlier this week.

Prior to their disappearance, Vicky White had announced plans to retire and sold her home for a price well below market value.

The sheriff’s office had announced on May 4 that she was no longer employed by them, adding that while April 29 was her last day of work, her retirement papers were never finalized.

(4033)
$10.95 (as of June 30, 2022 10:08 GMT -05:00 - More infoProduct prices and availability are accurate as of the date/time indicated and are subject to change. Any price and availability information displayed on [relevant Amazon Site(s), as applicable] at the time of purchase will apply to the purchase of this product.)

(2829)
$22.99 (as of June 30, 2022 10:08 GMT -05:00 - More infoProduct prices and availability are accurate as of the date/time indicated and are subject to change. Any price and availability information displayed on [relevant Amazon Site(s), as applicable] at the time of purchase will apply to the purchase of this product.)

Last on the List: A Single Dad Boss Romance

(2169)
$6.40 (as of June 30, 2022 10:08 GMT -05:00 - More infoProduct prices and availability are accurate as of the date/time indicated and are subject to change. Any price and availability information displayed on [relevant Amazon Site(s), as applicable] at the time of purchase will apply to the purchase of this product.)

(953)
$19.99 (as of June 30, 2022 10:08 GMT -05:00 - More infoProduct prices and availability are accurate as of the date/time indicated and are subject to change. Any price and availability information displayed on [relevant Amazon Site(s), as applicable] at the time of purchase will apply to the purchase of this product.)

How the Prime Minister stole Freedom

(1422)
$14.99 (as of June 30, 2022 10:08 GMT -05:00 - More infoProduct prices and availability are accurate as of the date/time indicated and are subject to change. Any price and availability information displayed on [relevant Amazon Site(s), as applicable] at the time of purchase will apply to the purchase of this product.)