Jonathan Kongbo had options – a few of them, to tell the truth.

Yet when it came time for the mammoth defensive end to decide where his next football adventure would begin, there were just so many things that kept pulling him back to Winnipeg and the Blue Bombers.

The club and Kongbo made it official on Monday, as the 24-year-old Surrey, B.C. product – a first-round selection of the Bombers, fifth overall, in 2019 – put his name on a new one-year contract.

“At the end of the day I had to ask myself what mattered most to me,” began Kongbo when reached by bluebombers.com in Seattle, WA on his way home to B.C. “It was that family feel I had in the building there and that whole professional atmosphere in Winnipeg that was there every day we came into work.

“It’s the guys in the locker room, the culture, the front office, the coaching, the support staff. Again, the decision was about things that were important to me, and all of those boxes are checked in Winnipeg. It was a pretty easy decision to make.”

A star at the University of Tennessee, Kongbo saw his rising NFL stock drop suddenly in 2018 after suffering a knee injury in a game against Auburn that October.

After drafting him, Bombers training staff and Kongbo worked tirelessly to get him healthy in 2019. He registered 12 tackles and a sack in a dozen regular-season games and, as the year progressed, earned more snaps in a defensive-line rotation. 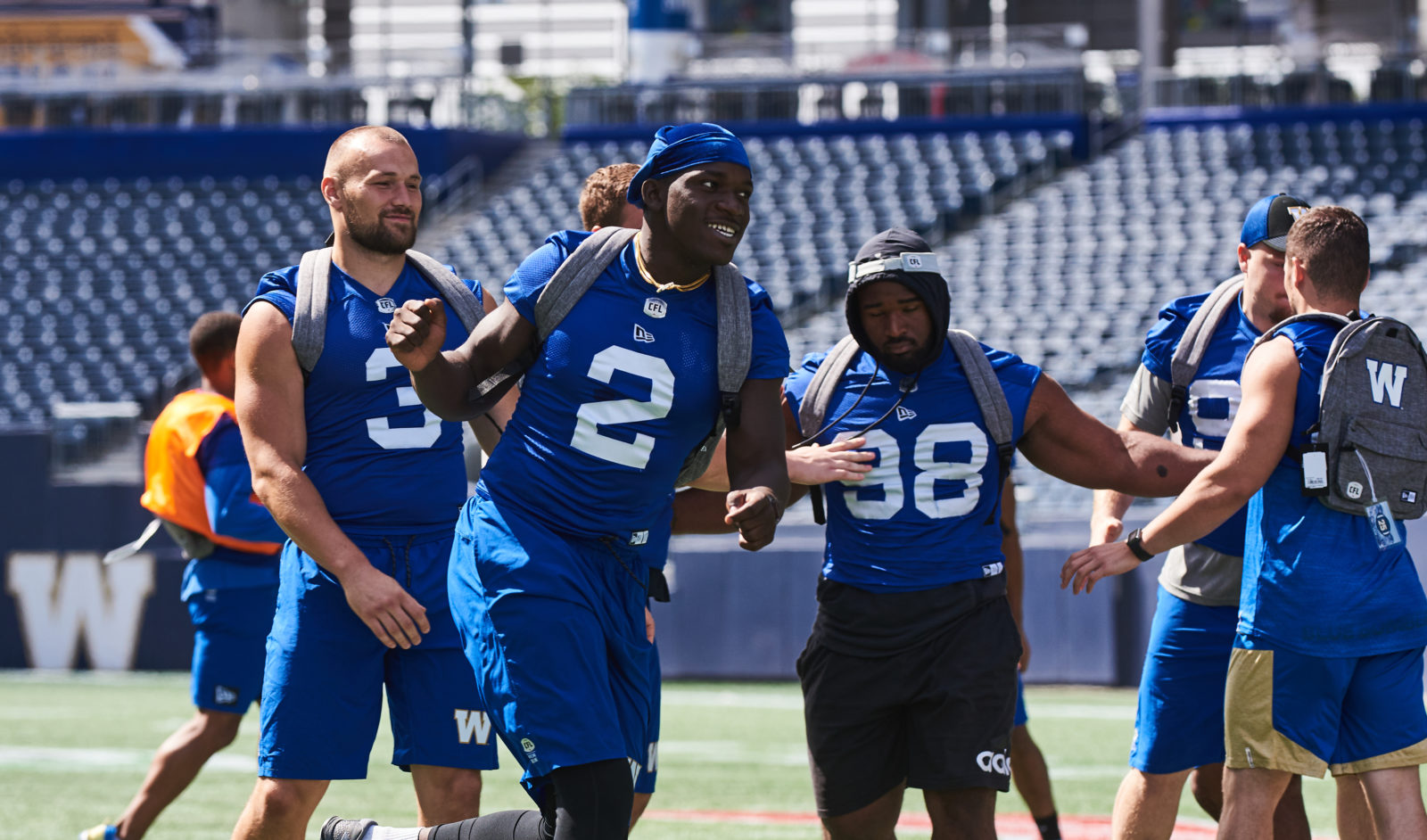 Kongbo was at his best in the playoffs and made a couple of critical stops in the West Final win over the Saskatchewan Roughriders. And while there was a sense he was just scratching the surface still, the San Francisco 49ers saw enough to sign him that offseason. He attended training camp with the 49ers last year before suffering a groin injury and then receiving an injury settlement before his release.

He played one game with the Sea Lions of The Spring League last Month before signing his new deal with the Bombers.

“It was a good feeling to get back on the football field after being out for, what, a year and a half now,” said Kongbo of his stint with the Sea Lions.

“There were other teams interested, but the whole thing about starting over and earning your teammates’ trust – all those things I’m comfortable in doing – but in Winnipeg this would be like my second year in the system. I’m familiar with that, I know the guys I’m going to be playing with and my role within the team. It just feels like I can come in and we can get rolling again where we last left off.

“It was during the playoffs when I started to really feel good and my knee didn’t feel like it was an issue. It’s exciting to me coming into camp in a month or so. I’m healthy, I get to have the whole camp install with my team, go through the camp dog days with the team… I think that will set me up a lot better and it will show on the field with my play.”

Kongbo’s return bolsters both the Bombers defensive line and Canadian talent depth. Drake Nevis and Craig Roh, both imports, left in free agency in 2020 to join the Toronto Argonauts, but the Bombers arguably still have the best defensive line depth in the CFL. 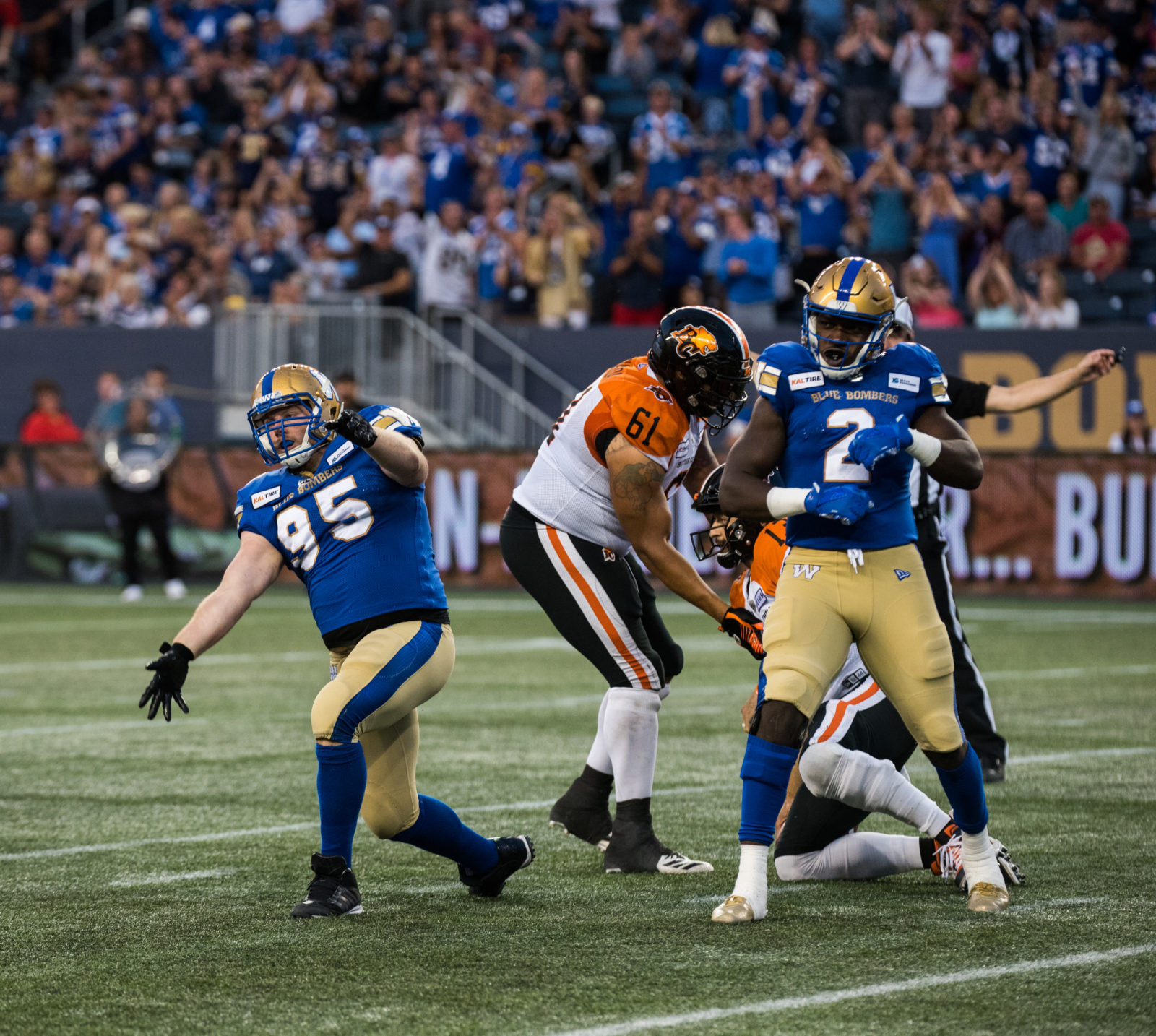 Willie Jefferson, the CFL’s top defensive player in 2019, and Jackson Jeffcoat are mainstays at end with Steven Richardson and Jake Thomas lining up at tackle. Kongbo’s size, strength and quickness allows him to line up at both end and tackle and his addition means the Bombers could rotate/start a number of Canadians into their defensive front. In addition to Kongbo and Thomas, the club also has draft picks Connor Griffiths (2019) and Nick Dheilly (2020) and undrafted Canadian Zach Houghron.

“Getting healthy was such a big thing for me in 2019 considering the severity of the injury I had with the ACL/MCL (torn),” said Kongbo. “Most guys, that puts you out. To get it to 100 percent was exciting. And now comes this opportunity. I’m healthy, I’m happy and I’ve put on some weight.

“This will be just my seventh year playing football (he didn’t begin playing until high school) and I feel like I’m starting to understand the game – it doesn’t feel like a new thing to me anymore. I got good training and learned some things I can add to my game in the NFL.