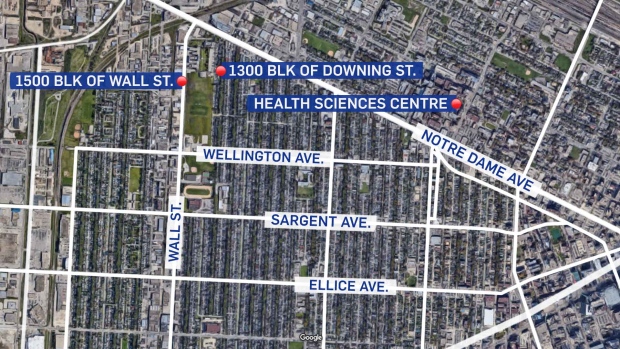 WINNIPEG — A 34-year-old Winnipeg man is facing several charges after police said he stole an ambulance, crashed it and then threatened people with an axe on Wednesday.

Around 2 p.m. on June 9, police said they had received reports that a man had stolen an ambulance from the Health Sciences Centre parking area for emergency vehicles.

Police said a man went to the ambulance and asked the paramedics inside for assistance. After asking, police said the man climbed inside through the back doors and went straight to the driver’s seat.

The man then drove away with the ambulance and police said the paramedics were able to get out of the vehicle before he drove off.

Police said the man drove the ambulance into a parking lot in the 1500 block of Wall Street and then crashed it into a parked vehicle.

The man left the ambulance and police said he ran to the 1300 block of Downing Street, where he allegedly started breaking windows of homes in the area and then stole an axe from a yard.

After he stole the axe, police said a homeowner confronted him and the man swung the axe at the homeowner but missed.

Police searched the area and were able to arrest the man in someone’s backyard with the axe. Police said no one was hurt during the incident.

Police said he remains in custody and none of the charges against him have been proven in court.