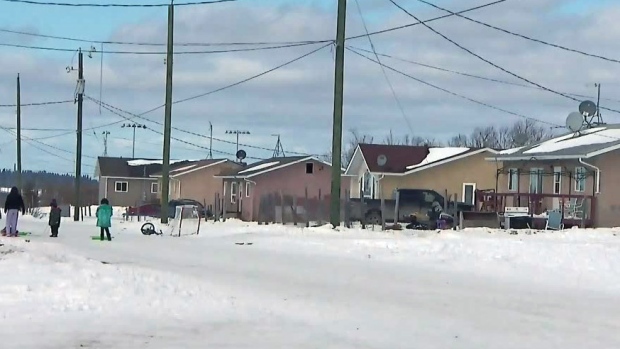 WINNIPEG — As one remote and isolated First Nation in Manitoba awaits confirmation of seven possible COVID-19 variant cases, another suspects a variant case may be in its community as well.

Over the weekend CTV News learned Pauingassi First Nation may have seven possible cases of the B117 variant which was first found in the United Kingdom.

The cases have yet to be confirmed through genetic sequencing at the national microbiology lab in Winnipeg.

Grand Chief Arlen Dumas of the Assembly of Manitoba Chiefs (AMC) said Monday as soon as he knows an announcement will be made.

But now another community – the Pimicikamak Cree Nation – has concerns over the COVID-19 variant.

Chief David Monias said his community near Cross Lake has already been through two outbreaks and is now facing a third.

“We just recently have this new one that’s just happening with all these new cases popping up really fast,” he said.

Monias said there is concern there may be one possible B117 variant case among the more than 50 cases reported over the weekend.

This case is not confirmed and Dumas did not want to comment on it during his interview with CTV News on Monday.

Monias said Pimicikamak has been under strict lockdown measures since September, and people are feeling frustrated, angry and depressed.

“People want to do things, but at the same time they are scared of this virus – especially if it’s a new variant, it’s going to create more fear,” Monias said.

Dumas said the possible cases in Pauingassi will open up many questions, like how did a variant linked to international travel end up there?

“You’d think a remote and isolated community like Pauingassi would be the last place to be worrying about a variant,” he said.

Dumas added leaders from across the province are calling him to verify what they have heard.

“Our communities, although we’re separated and isolated – we are all interconnected. We have relatives all over the place and people are concerned.”

Epidemiologist Cynthia Carr said it just takes one person connecting with one other person to bring a case into a community.

“There is the opportunity with quick reaction and adequate resources that we could contain this quickly,” she said.

The military is still in Pauingassi First Nation to help with the response. A contingency first arrived there on February 6.

Monias told CTV News he has asked for military support in Pimicikamak to help staff who are being stretched thin.

“Get it out of our community by stopping the spread and getting people into isolation.”