A Winnipeg member of the army reserves is under investigation for alleged involvement in a neo-Nazi group. (Canadian Forces)

The Canadian military is assessing whether a member suspected of recruiting for a global neo-Nazi terrorist group will keep his job, Department of National Defence officials said Tuesday.

A day earlier, the department confirmed it was investigating whether army reservist Master Cpl. Patrik Mathews, a member of the 38 Canadian Brigade Group, might be involved in The Base, an organization that promotes hate.

Brigade commander Col. Gwen Bourque, in a telephone conference with reporters on Tuesday, said Mathews last worked as a reservist in May, and his unit was not scheduled to work again until September. If he is found to be involved with the group, possible consequences could range from counselling to termination of his employment.

The investigation is ongoing,and no decision has yet been made, Bourque said.

Details of Mathews’ alleged activities were originally revealed by the Winnipeg Free Press, whose reporter went undercover posing as a recruit. According to the report, the 26-year-old man has been a member of the Army Reserves for about eight years and has training with explosives.

Mathews has no access to explosives outside of sanctioned military exercises and has only “rudimentary” training, which all combat engineers would have, Bourque said.

Posters seeking recruits for The Base have appeared in multiple locations around Winnipeg in recent weeks. 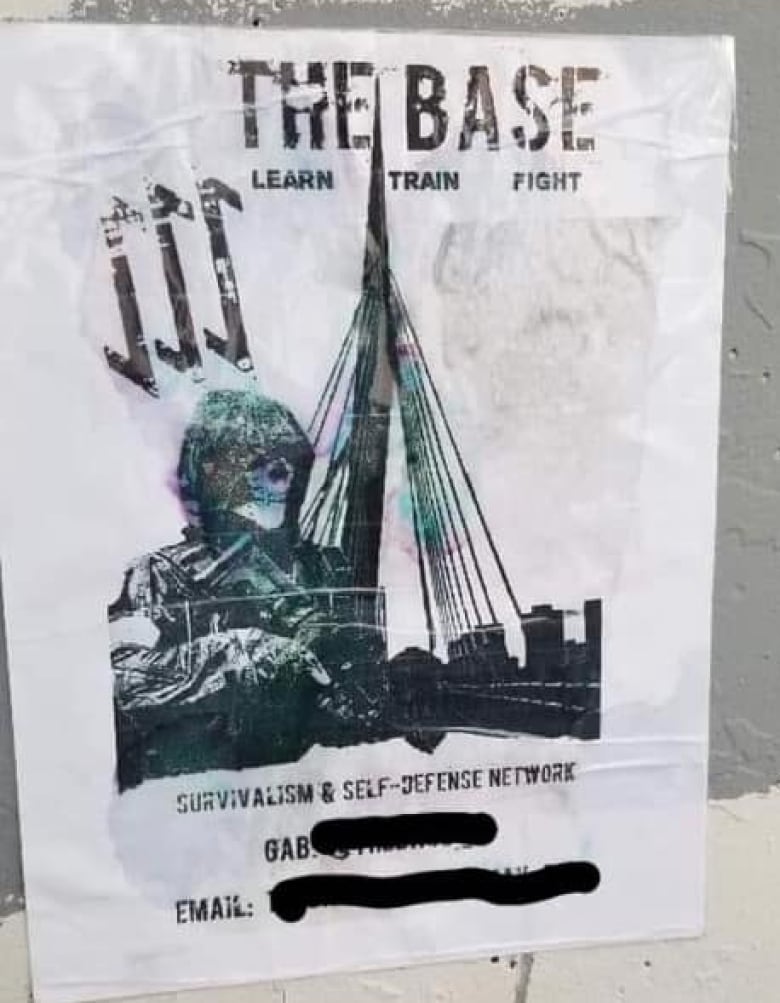 Posters for The Base have been put up in various locations around Winnipeg. (Facebook/FF1)

According to Evan Balgord, executive director of the Canadian Anti-Hate Network, The Base idolizes mass killers and pledges to carry out terrorist attacks to accelerate what they see as a coming race war.

Brig.-Gen. David Awalt, acting commander of 3rd Canadian Division, issued a statement Monday saying he was aware that a member of the brigade may be involved in a hate group, which is a violation of the Canadian Armed Forces code of values and ethics.

“I am ensuring we move forward to explore what immediate actions can be taken and will continue to support the ongoing CAF investigation,” Awalt said in the statement.