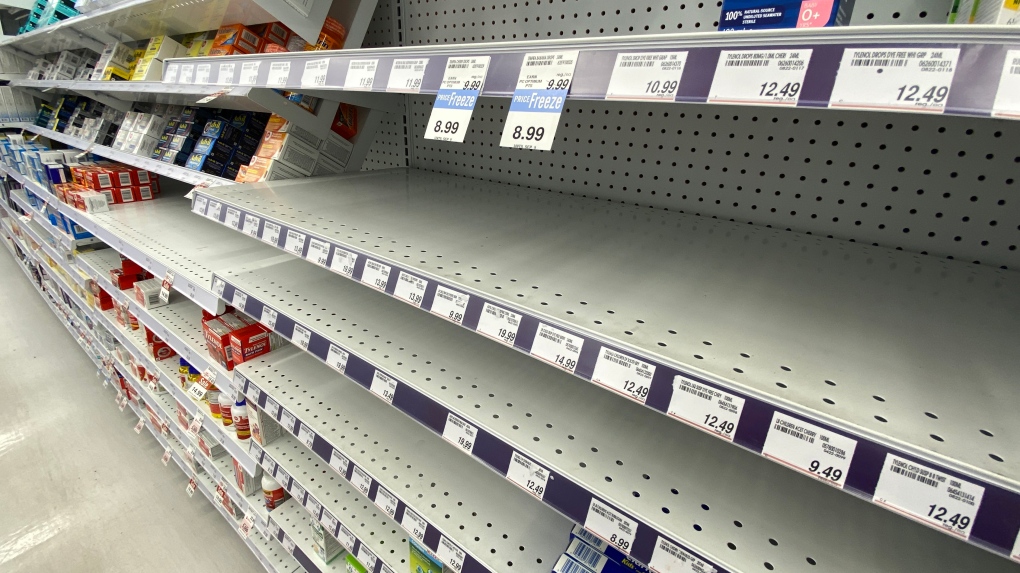 With three of her six children now sick with a cold, Stephanie Goddard says a shortage of children’s medication across Canada is making her panic.

“I can’t find Children’s liquid Advil or Tylenol anywhere,” she told CTVNews.ca in a telephone interview on Wednesday. “And knowing flu season is right around the corner … my anxiety is through the roof.”

Since June, Goddard has been struggling to find pain and fever medication for her children in Mississauga, Ont., where she lives. While her five-year-old son and two daughters, aged three and one, are not feverish, Goddard said she still wishes she had medicine on hand.

“I hate feeling helpless,” she said.

Goddard is one of several Canadians who wrote to CTVNews.ca about the difficulty of finding pain and fever medication for their children. Struggling to locate medicine, many parents are going to great lengths to secure what they can.

Goddard is among those asking friends and family to help by searching stores and purchasing what they can find. Others said they have visited compounding pharmacies for acetaminophen produced by lab technicians, but have had to pay more for the medication. Some families have resorted to buying medicine outside Canada.

CTVNews.ca had asked Canadians to share how the medicine shortage was affecting their families. The emailed responses have not all been independently verified.

The Ontario Pharmacists Association rang the alarm over cold and flu medication shortages across Canada in July. High demand and supply chain issues are being blamed for affecting availability of infant and children’s pain and fever medications, such as liquid Children’s Tylenol. The shortages also prompted Toronto’s Hospital for Sick Children to issue a letter to patients and caregivers informing them of potential challenges in accessing liquid acetaminophen and ibuprofen.

In August, a social media post shared by Health Canada urged Canadians to avoid buying more acetaminophen and ibuprofen medications than necessary for infants and children. Health Canada also advises patients to consult with doctors and pharmacists about other options in the event of a drug shortage, and to check the Drug Shortages Canada website for shortages reported by manufacturers. The Health Canada website has reported shortages among acetaminophen chewable tablets and Tempra Infant Drops, as well as other children’s medications. Shortages occur when a drug manufacturer is not able to meet the demand for a specific drug.

In order to help his 16-month-old daughter get through her COVID-19 symptoms, which included coughing and a runny nose, Branden Johnston used smaller doses of medicine meant for older children. His wife is a pediatric nurse, who was able to calculate the correct dosage for their daughter, he said. But for parents without this knowledge or prior experience, attempting to make this calculation at home can be dangerous, he said.

Despite checking numerous stores and pharmacies across Grande Prairie, Alta., such as Shoppers Drug Mart and Walmart, Johnston said he has not been able to find medication for his toddler.

“It was incredibly difficult to find anything over-the-counter,” he wrote in an email to CTVNews.ca on Tuesday. “Pharmacies would tell us that because there is no retail size available [we] would have to see a doctor to get a prescription for them to repackage the larger [adult or children’s] sizes into a dose suitable for the little one.”

Johnston said he was eventually able to find a bottle of Advil chewable tablets for children at Costco. He and his wife crushed the tablets and mixed a portion of them with water to give to their daughter using a syringe.

“It’s not the best option but … you do what you got to do when you’re a parent with a sick kid,” Johnston said on Wednesday in a telephone interview with CTVNews.ca. “Even toilet paper wasn’t this hard to find.”

COMPOUNDING PHARMACIES A RESOURCE FOR PARENTS

Ellen Patterson works at a compounding pharmacy in Lindsay, Ont., where she and other pharmacists have been preparing acetaminophen as a concentrated liquid for parents to buy. The pain and fever medication is packaged in different sizes and comes with a dosage guide based on the size of the child. While a prescription isn’t required, the medication is offered behind-the-counter, meaning it’s administered by a pharmacist rather than sold on a shelf, Patterson said.

In recent weeks, more parents than usual have been visiting the pharmacy in search of pain relief medication for their children, she said.

“We’re a tiny store in a small town [and] we’re seeing people that aren’t our normal clientele,” Patterson told CTVNews.ca in a telephone interview on Wednesday.

In an email to CTVNews.ca on Thursday, a spokesperson for Haleon, the maker of Advil, wrote that both the COVID-19 pandemic and an “unprecedented” cold and flu season have contributed to “a significant rise in viral illnesses” in Canada. As a result, the company has seen increased demand for pediatric pain relief products, including Children’s Advil.

“This significant increase in demand has resulted in unexpected intermittent disruption at the pharmacy and retail level,” the company said in its email to CTVNews.ca. “We are encouraging consumers to only buy what is needed so that all parents and caregivers can access the product they need to treat their loved ones.”

Johnson & Johnson Inc., the maker of Tylenol, also told CTVNews.ca that it is seeing higher-than-normal demand for some of its products when asked to confirm shortages among Infant and Children’s Tylenol medications.

“We continue to experience increased consumer-driven demand with certain products and markets,” the company said in an email to CTVNews.ca on Thursday. “We are taking all possible measures to ensure product availability.”

As some pharmacies struggle with a short supply of commercially available children’s medicine, Patterson said products offered by compounding pharmacies can serve as another option for parents.

At some pharmacies, however, the medication won’t come without an additional cost. Lindsay Haggarty said she has been struggling to find liquid Children’s Tylenol for her son for months. After visiting a compounding pharmacy near her home in Calgary, she said she paid $27 for a 100-millilitre bottle.

Comparatively, stores such as Walmart sell 100-millilitre bottles of liquid Children’s Tylenol for about $10.

“Unfortunately my child is allergic to ibuprofen so Tylenol is a necessity for us,” Haggarty wrote in an email to CTVNews.ca on Tuesday. “It’s very concerning that we can’t get Tylenol for kids.”

Other parents, such as Alina Smirnova, have had to rely on medication shipped from outside the country in order to get by. Her nine-month-old son was recently diagnosed with roseola, a childhood illness that caused his fever to spike to nearly 39 C.

Given her son’s negative reaction to liquid Tylenol, Smirnova had to give him suppositories, she said. But despite visiting numerous pharmacies near her home in Montreal, she wasn’t able to find any medication for her infant.

After sharing her frustration with her parents, who are on vacation in Italy, Smirnova said they were able to purchase two packs of suppositories and ship them to Canada for her son.

“We went to probably five to six pharmacies around where we live and nothing was available,” she told CTVNews.ca on Wednesday in a telephone interview. “I don’t think it’s until you have children [that] you realize how bad the situation is.”

Now, Smirnova’s parents are asking if she wants them to buy any other medications before they return. She plans to give them a list of everything she needs, she said.

“For me, it was like a 911 situation … I understand why people stock up,” she said. “I don’t wish this on any other parents.”

Finally, some parents are coping with the shortage by simply being persistent, calling and visiting as many pharmacies as they can. After phoning seven different pharmacies in British Columbia’s Saanich Peninsula on Tuesday, Liz George had no luck finding Infant or Children’s Tylenol for her 11-month-old and nine-year-old children, both of whom are sick, she said.

She did, however, hear from two pharmacies with another brand of acetaminophen in stock for infants. After hanging up the phone, she quickly drove to the pharmacy and grabbed the last bottle in stock, she said.

“The person at the counter said she was surprised there was anything!” George wrote in an email to CTVNews.ca on Tuesday. “I’m thankful to have found something.”

(10058)
(as of October 5, 2022 10:49 GMT -05:00 - More infoProduct prices and availability are accurate as of the date/time indicated and are subject to change. Any price and availability information displayed on [relevant Amazon Site(s), as applicable] at the time of purchase will apply to the purchase of this product.)

(2827)
(as of October 5, 2022 10:49 GMT -05:00 - More infoProduct prices and availability are accurate as of the date/time indicated and are subject to change. Any price and availability information displayed on [relevant Amazon Site(s), as applicable] at the time of purchase will apply to the purchase of this product.)

(46777)
(as of October 5, 2022 10:49 GMT -05:00 - More infoProduct prices and availability are accurate as of the date/time indicated and are subject to change. Any price and availability information displayed on [relevant Amazon Site(s), as applicable] at the time of purchase will apply to the purchase of this product.)

(14929)
(as of October 5, 2022 10:49 GMT -05:00 - More infoProduct prices and availability are accurate as of the date/time indicated and are subject to change. Any price and availability information displayed on [relevant Amazon Site(s), as applicable] at the time of purchase will apply to the purchase of this product.)

(15814)
(as of October 5, 2022 10:49 GMT -05:00 - More infoProduct prices and availability are accurate as of the date/time indicated and are subject to change. Any price and availability information displayed on [relevant Amazon Site(s), as applicable] at the time of purchase will apply to the purchase of this product.)