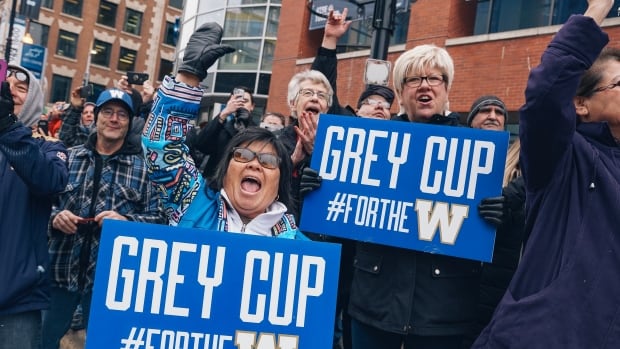 Bomber fans going wild for the Grey Cup champs in downtown Winnipeg during a parade for the team on Nov. 26. The team says fans are still in celebration mode, buying heaps of Grey Cup merchandise. (Michael Fazio/CBC)

The Winnipeg Blue Bombers say their Grey Cup merchandise is flying off the shelves, putting them they’re on pace to sell the most in CFL history.

“We know our fan base is the strongest in the league and I have no doubt we will surpass Saskatchewan’s record set in 2013,” said Wade Miller, president and CEO of the Winnipeg Football Club, in a press release.

Blue Bombers fans have been in celebration mode ever since the team defeated the Hamilton Tiger-Cats in a 33-12 victory to capture the 107th Grey Cup on Nov. 24.

More than 10,000 fans lined the streets of downtown Winnipeg last Tuesday for a parade to celebrate the win, while close to 7,500 fans came to the RBC Convention Centre for events hosted by the team last weekend.

Grey Cup merchandise can be found at the Bomber stores at IG Field and at the St. Vital Centre.

Fargo mayor on fight against COVID-19 and tourist dollars lost