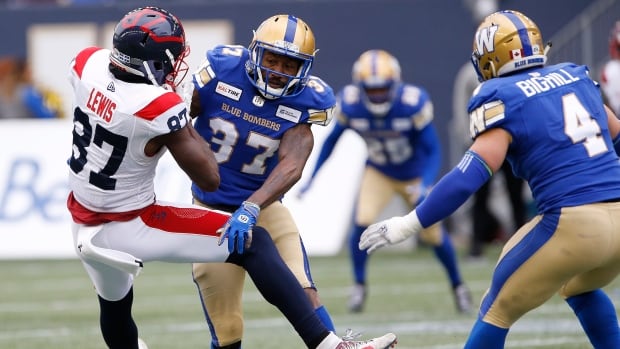 Nick Taylor’s interception for a touchdown was a highlight but the Blue Bombers relied more on a solid ground game to beat the Montreal Alouettes 35-24 on Saturday, getting a little payback after their last meeting when Winnipeg surrendered a 20-point lead.

Andrew Harris and Drew Wolitarsky both had TDs as the Bombers (10-6) took a five-point lead into the second half Saturday. Kicker Justin Medlock added three field goals before Taylor’s interception in the fourth and another with less than two minutes left in the game.

A 90-yard runback by Mario Alford was Montreal’s (8-7) lone touchdown in the first half. Jake Wieneke added another in the third quarter and Boris Bede added a field goal.

Quan Bray had a final score for the visitors with less than a minute left.

The Alouettes’ loss clinched first in the CFL’s East Division for the Hamilton Tiger-Cats. The Toronto Argonauts and Ottawa Redblacks have been mathematically eliminated from the post-season.