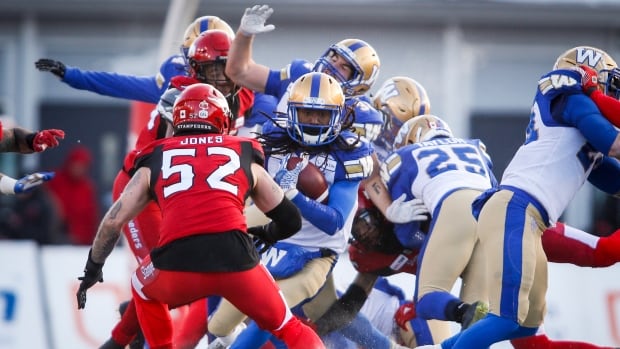 Winnipeg’s Janarion Grant, centre, runs the ball as Calgary Stampeders’ Riley Jones closes in during the Bombers’ 35-14 win on Sunday to advance to the West final. (Jeff McIntosh/Canadian Press )

The Winnipeg Blue Bombers advanced to the CFL’s West Division Final with a 35-14 win over the Calgary Stampeders in Sunday’s semifinal.

The Blue Bombers travel to Regina to face the Saskatchewan Roughriders in next Sunday’s West Final.

The victor there represents the West in the Grey Cup in Calgary on Nov. 24.

Reggie Begelton scored two touchdowns for the host Stampeders, who won last year’s Grey Cup but will not defend their title on home turf this year.