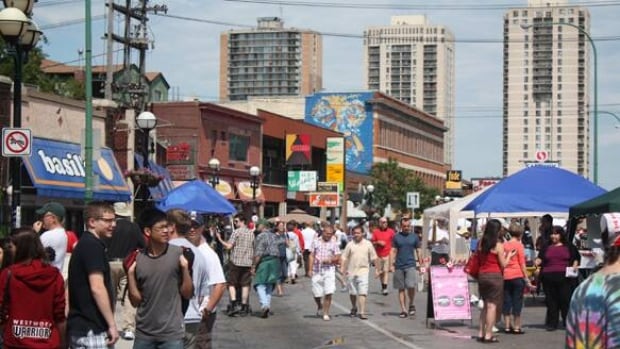 The decades-old Canada Day tradition of a street party in Osborne Village won’t be returning.

The annual event, which hasn’t happened for two years because of the COVID-19 pandemic, had lost support from members of the area’s business community and the executive director of the Osborne Village Business Improvement Zone (BIZ) says it’s time to move in a new direction.

“It started as a community-organized event but it just grew into something else that wasn’t benefiting our business members, and I don’t think was advancing the perception of Osborne Village in the direction that we wanted to go,” Lindsay Somers said.

The BIZ, which organized the event that first launched in the 1990s, surveyed its members last fall about their needs and priorities, and they found that local businesses weren’t getting anything from the Canada Day activities.

“Often we’d even see a food truck plug right in front of a restaurant in Osborne Village. And we had large patios filled with people and a lot of extra security.”

Instead of having one large party, the BIZ will introduce Happy Fridays in the Village, with live music at the bell tower near Osborne and Stradbrook, 12 patios and walking tours of the neighbourhood throughout the summer. The first Happy Friday will be on July 1 this year.

Once dubbed one of Canada’s most livable neighbourhoods, Osborne Village has struggled in recent years as longstanding businesses have closed their doors or left the area.

The Canada Day festival brought tens of thousands of people to the area, but few of those people patronized the businesses in the neighbourhood, instead staying outside and buying from vendors that had set up on the street, Somers said.

“We love having people on our streets. We want people to be walking around and enjoying Osborne Village, but with our capacity and where we’re at now, post-COVID, we’re understanding that we have to do a lot of rebuilding in our community.”

The BIZ is also investing in public art and murals and has partnered with architect Joe Kalturnyk on a community patio.