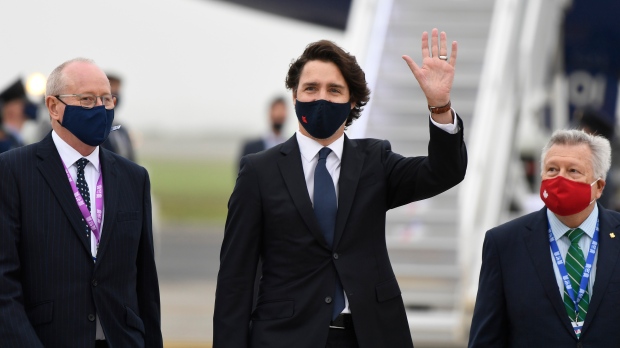 OTTAWA — Canada is planning to contribute up to 100 million doses of COVID-19 vaccines to developing countries, including previously-announced funding to the COVAX global vaccine-sharing initiative, according to a government source.

The sharing of doses will happen once Canada’s domestic vaccine rollout is complete, with Prime Minister Justin Trudeau set to unveil more details during the G7 Summit in the U.K.

(The government appears to have pushed out news of vaccine contributions sooner than planned, because of claim circulating today that Canada was only member of G7 that hadn’t committed to plan for the G7 nations to provide 1 billion doses. )

With a report from CTV National News’ Glen McGregor

This is a breaking news update, previous story from The Canadian Press follows.

Prime Minister Justin Trudeau enters the first day of the G7 summit as the only leader of his democratic peers who has yet to pledge how many vaccine doses his country will donate to less wealthy nations.

The United Kingdom is expecting leaders to agree to give other parts of the world access to one billion doses of COVID-19 vaccines through donations and funding in hopes that it speeds up the timeline to defeat the virus.

A Canadian government official, speaking on the condition of anonymity, says Canada will pledge up to 100 million doses, including what it bought for others in vaccine sharing initiatives.

The day before the summit, the U.K. promised to send at least 100 million doses within the next year, and United States President Joe Biden pledged he would send away another half a billion.

Trudeau’s first day of meetings Friday started not with another G7 leader, but in a virtual audience with Queen Elizabeth.

His first leader-to-leader sit-down happened with British Prime Minister Boris Johnson, who, as host of the summit, stated he wants the three-day gathering to produce promises on ways to end the pandemic by the end of next year.

Posing for photographers and journalists, the pair stood elbow-to-elbow, with Johnson flashing a thumbs up before their meeting started.

The G7 is gathering in Carbis Bay, a hilly oceanside village in southwest England whose narrow streets have been taken over by police.

Later Friday, the G7 leaders will take part in a session that focuses on how the health and economic recovery from COVID-19 can be “for all.”

Ensuring equitable access to inoculations against COVID-19 is a call facing leaders from the World Health Organization, as well as anti-poverty and humanitarian groups, since over 80 per cent of the vaccinations to date have been in wealthy countries.

Although Canada has yet to spell out its plans for donating vaccines, it has promised $440 million will go to COVAX, a vaccine-sharing initiative to buy doses directly from manufacturers and give them to lower- and middle-income nations.

Canada has had a mixed experience with access to vaccines. Shipments into the country got off to a sluggish start in January and February, which was followed by a deadly third wave of the virus.

But vaccine shipments have been ramping up this spring.

This week, Canada announced it would receive another seven million doses of vaccine from Moderna in June. Procurement Minister Anita Anand said there should be enough vaccines delivered for 80 per cent of eligible Canadians to be fully vaccinated by the end of July.

This report by The Canadian Press was first published June 11, 2021