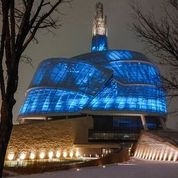 WINNIPEG — The Canadian Museum for Human Rights is honouring health-care workers on Saturday night with a blue-themed light show.

The show is an extension of a nightly holiday light display that has been taking place at the CMHR since December 21. The shows were set to expire January 9, but the museum has decided to keep them going until the end of January.

“You’ll see different shades of blue, with still some tones of holidays and winter themes like snowflakes and things like that,” said Jacques Lavergne, vice president of visitor experience and business development at the Canadian Museum for Human Rights.

Lavergne said this was an opportunity to recognize health-care workers who have been working very hard over the past months. He shared a story about a nurse from St. Boniface Hospital who, on New Year’s Eve, had just finished working a difficult shift.

“At the end of her shift, she said she was tired and quite exhausted, and she looked out the window to look at the museum, only to be inspired and to get her spirits brought back up,” Lavergne said.

The light show extension comes as Mayor Brian Bowman called on all Winnipeggers to join Canadians in solidarity by leaving their holiday lights on till January.

“This is really an opportunity for us to connect with the community. You know a lot of people, especially during the holiday break, had to spend the holidays by themselves and we were just really hoping to inject some hope and inspiration to people’s lives in what has been a difficult time,” said Lavergne.

The new light shows are scheduled to begin at 5:00 nightly and run till around midnight.