Gerry Shingoose was sitting outside St. Mary’s Cathedral when Price and some of his teammates were on their way to the rink for Game 2 against the Winnipeg Jets.

“Some of them waved and acknowledged us, but Carey Price stopped,” Shingoose told CTV News.

Shingoose said she was forced to attend a Catholic-run residential school in Saskatchewan from 1962 to 1971.

After speaking with Price, she gave him an orange ribbon and a tobacco tie.

“The tobacco tie, I told him, is from the sacred fire we had the last four days.”

The sacred fire was lit on the grounds of the Manitoba Legislative Building to honour and recognize the 215 children found buried on the property of a former residential school in Kamloops, B.C.

“Knowing he’s a generational survivor, and he knows the history, and he knows our truth. It was good to make that connection with him tonight. It made my day,” Shingoose said.

She was later gifted with a round two warmup puck from the Canadiens. 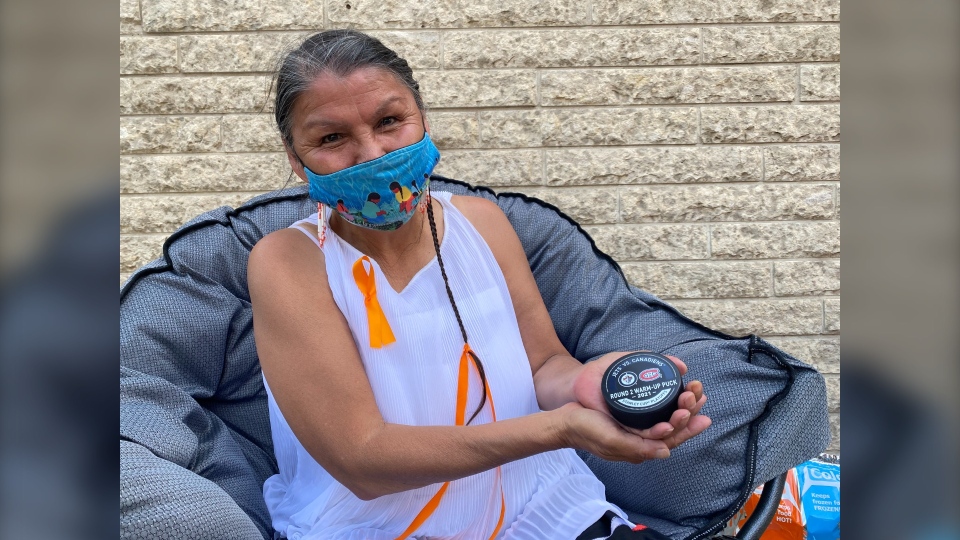 “You could see the kindness and the caring.”

Shingoose said she is waiting outside the church, where 215 orange ribbons were tied earlier this week, to meet with the Archbishop of Winnipeg. She wants the Catholic Church to apologize for its role in residential schools.

“I’m seeking justice as a survivor, but also for all the children that are being found in residential schools.”

Shingoose said in her nine years at a residential school, she suffered extensive abuse.

“One of the abuses that I experienced was hearing loss. I have to wear a hearing aid because of the blows and the punches and hits to the head,” said Shingoose.

“English was beaten into me, so I don’t know my language now, but I do know my identity. I connected with my Indigenous folks and they’re very strong, and they keep me going. They help me heal from my trauma from the Catholic-run school.”

Shingoose said a meeting is being arranged with the Archdiocese of Winnipeg next week, but she is hoping to speak with the Archbishop before then.

Archbishop Richard Gagnon, president of the Canadian Conference of Catholic Bishops, said in a statement Monday the news of the recent discovery is “shocking.”

“As we see ever more clearly the pain and suffering of the past, the Bishops of Canada pledge to continue walking side by side with Indigenous Peoples in the present, seeking greater healing and reconciliation for the future.”

On Friday, Prime Minister Justin Trudeau called on the Catholic Church to “step up” and take responsibility for its role in Canada’s residential school system.

-With files from The Canadian Press.