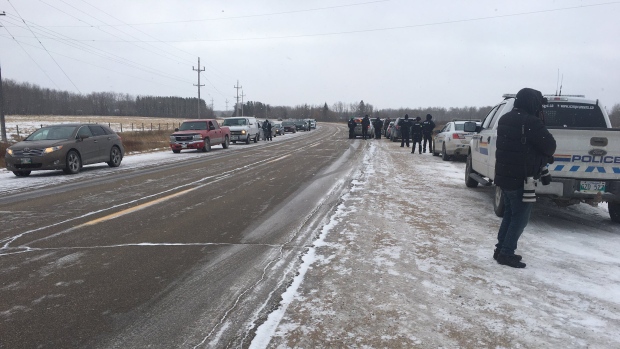 WINNIPEG — A drive-in service at a church near Steinbach, Man. was thwarted when RCMP blocked the church’s parking lot entrance.

About 100 parishioners at Church of God Restoration lined the side of Highway 12 as RCMP cruisers blocked the parking lot Sunday morning.

Under public health orders, places of worship are not allowed to be open, including for drive-in service. Groups can also not exceed five people inside or out.

The situation got tense when churchgoers exited their vehicles and blocked a tow truck from passing. Eventually, the tow truck backed away.

CTV News has reached out to RCMP to see if any tickets have been given out.

A spokesperson for the province said an update would be made on Tuesday about enforcement numbers.

Church of God Restoration held a service a week prior and was fined $5,000 for breaking public health orders.

Tobias Thissen, a minister at the church who received  two $1,296 tickets from RCMP last week, one for the church and one for speaking at an anti-mask rally, did not want to comment but said he’s going to fight the fines he’s received in court.