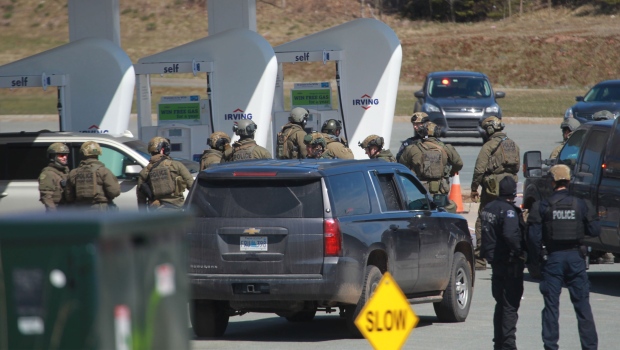 HALIFAX — Three people — including the gunman’s common-law partner — have been charged with providing ammunition to the Nova Scotia man responsible for Canada’s worst mass murder.

Lisa Diana Banfield, 52, and James Blair Banfield, 64, both of Dartmouth, and Brian Brewster, 60, of Sackville, have each been charged with unlawfully transferring ammunition.

According to court documents, Lisa Banfield is the common-law partner of the shooter.

“The gunman’s relationships with others was very much a part of this investigation and, as with every piece of information, were analyzed as we pieced together the gunman’s actions, motives and the potential for others’ involvement,” said Nova Scotia RCMP Supt. Darren Campbell in a statement released Friday.

“As a police agency we cannot, however, dismiss evidence from the investigation that others contributed to the incidents by providing the gunman with the ammunition he used on April 18 and 19.”

Police say the three people charged in the investigation cooperated with investigators and had no prior knowledge of the gunman’s actions.

They are scheduled to be arraigned in Dartmouth provincial court on Jan. 27.

“Though the gunman is ultimately responsible for his actions, and can never stand trial, we have a duty to investigate by the same standards that we would if he was alive,” said Campbell.

“In an investigation, there is no room for speculation. Every piece of information we uncovered and received was analyzed, fact checked and corroborated in order to assess the weight, validity and value of the information.”

Campbell says the RCMP has spent thousands of hours investigating the gunman’s actions and motives and how he obtained the equipment he used during the rampage as part of an investigation called Operation H-Strong.

This is the first time police have laid charges in connection with the killings.

“Our investigative objective was also to determine inquiries, actions and standards also centred on gathering evidence to determine what role any individual may have played in terms of having knowledge of the gunman’s plan or having assisted him in any way,” explained Campbell in the statement.

Campbell says the families of the victims have been notified of the charges.

Police will not be providing further comment on the matter.

“To ensure a fair trial for those who have been charged and with the public inquiry now ongoing, the most appropriate and unbiased opportunity to provide any additional information is to do so with our full participation in the inquiry,” said Campbell. “The RCMP will respectfully refrain from further commenting on these matters outside of the inquiry.”

The charges come nearly eight months after a gunman disguised as a Mountie killed 22 people during a violent rampage in rural Nova Scotia in April.

Police have confirmed Gabriel Wortman killed 13 people near his summer home in Portapique, N.S., the night of April 18. He killed another nine people in northern and central Nova Scotia the next day.

Among the victims was Const. Heidi Stevenson, who was killed while trying to stop the gunman. Another victim, Kristen Beaton, was pregnant at the time of her death.

Wortman was eventually shot and killed by police at a gas station outside Halifax, roughly 13 hours after his rampage began.

After loud calls for action from the victims’ families, the federal and Nova Scotia governments announced in July that a joint public inquiry will determine what happened, and make recommendations to prevent similar events in the future.