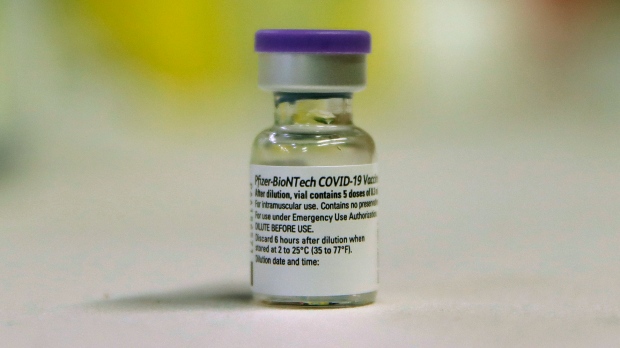 WINNIPEG — The province has paused new COVID-19 vaccine bookings for youth in Manitoba moving forward due to a Pfizer supply slowdown that is expected to cut Manitoba’s weekly shipment of doses in July.

Botha said the province will continue to receive between 83,000 to 89,000 doses of Pfizer per week throughout June, but during the first week of July, the province is slated to receive 32,800 Pfizer doses.

Beyond that, the province does not know how many doses it will receive in July.

He said the federal government is expected to update the schedule with figures for the rest of July.

“Depending on those figures, we cannot concretely say how or even if this Pfizer supply disruption will affect our overall roll out or its targets,” he said.

Botha said second-dose eligibility will continue to expand, as there are Moderna doses available.

However, Botha said youth will not be able to book vaccine appointments unless more Pfizer doses are confirmed.

“We cannot, and do not create appointments in the system for Pfizer that is not confirmed,” Botha said.

Currently, Pfizer is the only COVID-19 vaccine approved for children ages 12 and up in Canada.

“Once we receive a confirmed shipment schedule for Pfizer again, we will be able to open up appointments for youth,” Botha said.

A spokesperson for the province told CTV News while youth will not be able to book appointments in the short term, the province is not stopping youth from looking for Pfizer appointments as some may open up if adults cancel to book for Moderna.

Botha added the province may have to cancel Pfizer appointments set after July 7, but said no decisions have been made yet.

“In the unfortunate circumstance where we have to cancel some or any appointments because of no supply coming in, we will as always inform the relevant clients many days in advance – over a week in advance – so they can make other plans,” he said.

“As always, we will try to, first and foremost, honour that appointment with an alternate mRNA type.”

Botha encouraged Manitoba adults who are eligible for a second-dose to book an appointment as soon as possible, regardless of the brand of vaccine.

The province said Moderna and Pfizer are both safe, effective, and interchangeable.

The province said very few Pfizer appointments are expected to be available in the coming weeks.