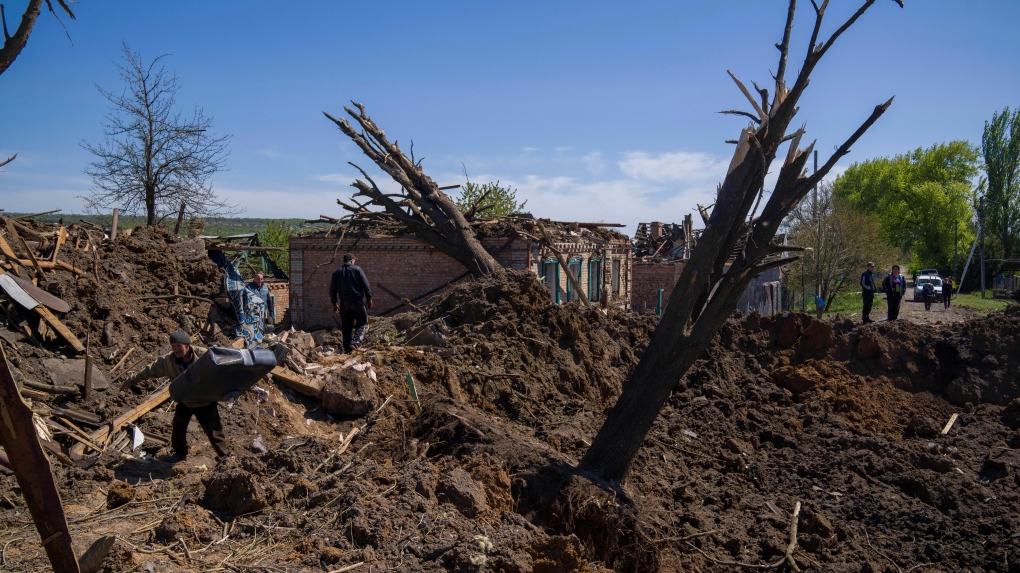 Dozens of Ukrainians were feared dead Sunday after a Russian bomb destroyed a school sheltering about 90 people in the basement as Moscow’s invading forces kept up their barrage of cities, towns and villages in eastern and southern Ukraine.

The governor of Luhansk province, one of two areas that make up the eastern industrial heartland known as the Donbas, said the school in the village of Bilohorivka caught fire after Saturday’s bombing. Emergency crews found two bodies and rescued 30 people, he said.

“Most likely, all 60 people who remain under the rubble are now dead,” Gov. Serhiy Haidai wrote on the Telegram messaging app. Russian shelling also killed two boys, ages 11 and 14, in the nearby town of Pryvillia, he said.

Since failing to capture Ukraine’s capital, Russia has focused its offensive in the Donbas, where Moscow-backed separatists have been fighting since 2014 and occupy some territory. The largest European conflict since the Second World War has developed into a punishing war of attrition due to the Ukrainian military’s unexpectedly effective defence.

To demonstrate success, the Russian military worked to complete its conquest of the besieged port city of Mariupol, which has been under relentless assault since the start of the war, in time for Victory Day celebrations on Monday. A sprawling seaside steel mill is the only part of the city not under Russian control.

All the remaining women, children and older civilians who had been sheltering with Ukrainian fighters in the Azovstal plant were evacuated Saturday. The troops still inside have refused to surrender; hundreds are believed to be wounded.

The Ukrainian government has been reaching out to international organizations to try to secure safe passage for the estimated 2,000 fighters remaining in the plant’s underground tunnels and bunkers. Zelenskyy acknowledged the difficulty, but said: “We are not losing hope, we are not stopping. Every day we are looking for some diplomatic option that might work.”

The Ukrainian leader was expected to hold online talks Sunday with British Prime Minister Boris Johnson, U.S. President Joe Biden and leaders from other Group of Seven countries. The meeting is partly meant to display unity among Western allies on Victory in Europe Day, which marks Nazi Germany’s 1945 surrender.

The Odessa city council said four of the missiles launched Saturday hit a furniture company, with the shock waves and debris badly damaging high-rise apartment buildings. The other two hit the Odessa airport, where a previous Russian attack destroyed the runway.

Ukrainian leaders warned that attacks would only worsen in the lead-up to Victory Day, the May 9 holiday when Russia celebrates Nazi Germany’s defeat in 1945 with military parades. Russian President Vladimir Putin is believed to want to proclaim some kind of triumph in Ukraine when he addresses the troops on Red Square on Monday.

In neighbouring Moldova, Russian and separatists troops were on “full alert,” the Ukrainian military warned. The region has increasingly become a focus of worries that the conflict could expand beyond Ukraine’s borders.

Pro-Russian forces broke off the Transnistria section of Moldova in 1992, and Russian troops have been stationed there since, ostensibly as peacekeepers. Those forces are on “full combat readiness,” Ukraine said, without giving details on how it came to the assessment.

Moscow has sought to sweep across southern Ukraine both to cut off the country from the Black Sea and to create a corridor to Transnistria. But it has struggled to achieve those objectives.

In a sign of the dogged resistance that has sustained the fighting into its 11th week, Ukraine’s military struck Russian positions on a Black Sea island that was captured in the war’s first days and has become a symbol of Ukrainian resistance.

A satellite image taken Sunday morning by Planet Labs PBC showed smoke rising from two sites on the island. On the island’s southern edge, a fire smoked next to debris. That corresponded to a video released by the Ukrainian military showing a strike on a Russian helicopter that had flown to the island.

A Planet Labs image from Saturday showed most of the island’s buildings, as well as what appeared to be a Serna-class landing craft, destroyed by Ukrainian drone attacks.

The most intense combat in recent days has taken place in eastern Ukraine. A Ukrainian counteroffensive near Kharkiv, a city in the northeast that is the country’s second-largest, “is making significant progress and will likely advance to the Russian border in the coming days or weeks,” according to the Institute for the Study of War.

In a video interview posted on his Telegram channel, Haidai said that Kyiv’s troops had “moved to stronger positions, which they had prepared ahead of time.”

The Russia-backed rebels have established a breakaway region in Luhansk and neighboring Donetsk, which together make up the Donbas. Russia has targeted areas still under Ukrainian control.

“All free settlements in the Luhansk region are hot spots,” Haidai said. “Right now, there are shooting battles in (the villages) of Bilohorivka, Voivodivka and towards Popasna.”

Gambrell reported from Lviv, Ukraine. Yesica Fisch in Bakhmut, David Keyton in Kyiv, Yuras Karmanau in Lviv, Mstyslav Chernov in Kharkiv, Lolita C. Baldor in Washington and AP staff around the world contributed to this report.

(2829)
$22.99 (as of June 30, 2022 10:08 GMT -05:00 - More infoProduct prices and availability are accurate as of the date/time indicated and are subject to change. Any price and availability information displayed on [relevant Amazon Site(s), as applicable] at the time of purchase will apply to the purchase of this product.)

Last on the List: A Single Dad Boss Romance

(2169)
$6.40 (as of June 30, 2022 10:08 GMT -05:00 - More infoProduct prices and availability are accurate as of the date/time indicated and are subject to change. Any price and availability information displayed on [relevant Amazon Site(s), as applicable] at the time of purchase will apply to the purchase of this product.)

(180)
$61.12 (as of June 30, 2022 10:08 GMT -05:00 - More infoProduct prices and availability are accurate as of the date/time indicated and are subject to change. Any price and availability information displayed on [relevant Amazon Site(s), as applicable] at the time of purchase will apply to the purchase of this product.)

The Summer I Turned Pretty

(5248)
$9.90 (as of June 30, 2022 10:08 GMT -05:00 - More infoProduct prices and availability are accurate as of the date/time indicated and are subject to change. Any price and availability information displayed on [relevant Amazon Site(s), as applicable] at the time of purchase will apply to the purchase of this product.)

(2040)
$49.99 (as of June 30, 2022 10:08 GMT -05:00 - More infoProduct prices and availability are accurate as of the date/time indicated and are subject to change. Any price and availability information displayed on [relevant Amazon Site(s), as applicable] at the time of purchase will apply to the purchase of this product.)