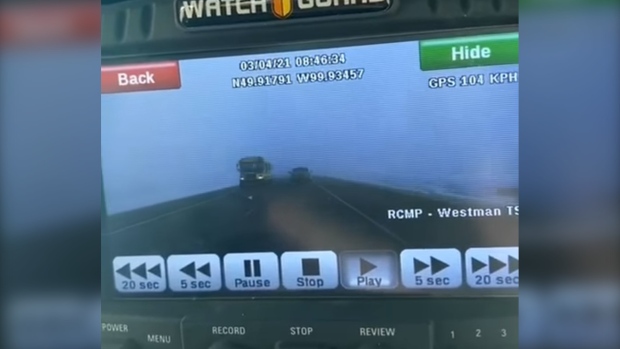 WINNIPEG — Manitoba RCMP is issuing a warning to drivers after a near miss crash north of Brandon on Thursday.

RCMP posted a video to its Facebook page Thursday afternoon telling people there could have been a tragic incident because of one driver.

“Your decisions on the road could have catastrophic consequences,” the post reads.

In the video, RCMP shows a driver passing another vehicle in a low visibility situation on Highway 10. Seconds later, a school bus drove by in the opposite direction, just missing the passing vehicle.

Sgt. Paul Manaigre, the media relations office with Manitoba RCMP, said there is a simple message with this video—drive to the conditions.

“You can clearly see it was foggy out, so your visibility is very limited,” said Manaigre. “When you can’t see that far in front of you, those vehicles can come at you pretty quickly.”

He said people can be impatient on the highway and the few extra minutes that people take could make all the difference.

“If this had been a head-on collision with a school bus, I’d hate to think what could have happened out of this.”

RCMP said the 28-year-old driver was given a ticket for $174 for passing without a clear view.

Manaigre added, he has a message for drivers on how to act on the roads as the weather starts to change.

“You have to drive defensively and to the conditions on the road. We have an early spring coming, so highway conditions will be drying up, but now you have those temperature fluctuations, so in this case you are seeing fog in certain areas.”

He said drivers need to be prepared for all weather conditions and scenarios on the road.