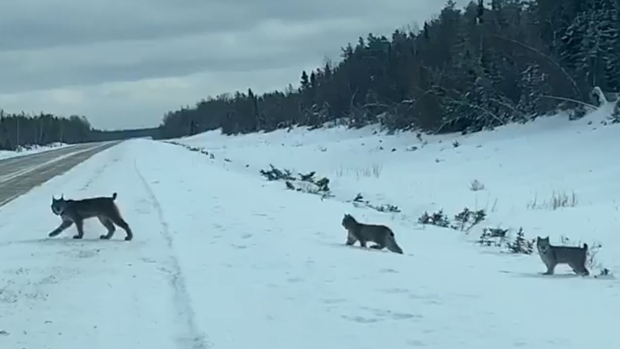 WINNIPEG — A Manitoba Hydro worker stumbled across an “extremely rare” sight while traveling the highways in rural Manitoba – a mother lynx and her litter.

Sean Kirchmann, a Hydro employee, was on his way to Grand Rapids, Man., when he noticed some small feline heads poking out of the trees near the highway.

“One by one, the mother came out followed by her kittens, gingerly crossing through the ditch and then at the side of the road,” said Bruce Owen, the spokesperson for Manitoba Hydro.

It was a moment of mother nature that was over in less than a minute, but Kirrchmann caught the entire scene on camera. The video was posted on Facebook by Manitoba Hydro, and soon garnered hundreds of likes, comments and shares.

“It’s an animal that not many people see. They may see a bear, coyote, wolf, moose, a dear, but to see a lynx – a entire family of lynx is extremely rare,” Owen said.

While Hydro says it’s a beautiful sight – you won’t be able to go see it for yourself. Manitoba Hydro is keeping the exact location the video was taken under wraps to keep the lynx safe from people.