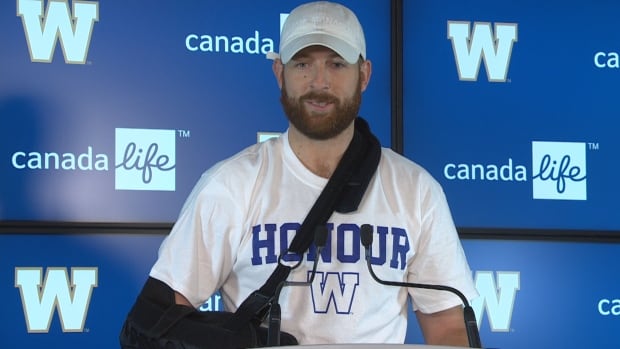 Winnipeg Blue Bombers quarterback Matt Nichols, seen here in an Oct. 1 photo, and his wife, Ali, have made a $10,000 donation to the Children’s Hospital Foundation. (Jaison Empson/CBC)

The Children’s Hospital Foundation of Manitoba is now one step closer to buying a new pair of goggles that help relax kids during MRI scans, after receiving a donation from a well-known member of the Winnipeg Blue Bombers.

Bombers quarterback Matt Nichols and his wife, Ali, donated $10,000 to the foundation to help fund the purchase of a second pair of cinema vision goggles.

The goggles come with headphones that shut out the MRI machine noise, allowing kids to watch a movie while in the machine, a spokesperson for the Bombers said in a news release.

Without these goggles, scans are often lost because of claustrophobia and some kids have to be sedated because of anxiety, which can mean a longer recovery time after a scan, the spokesperson said.

“It’s so important for us as a family to give back to a community that has given us so much,” said Nichols, whose season came to an early end this year because of shoulder surgery.

“We have two young daughters who are fortunate to have their health, but that’s not the case for many children. A second pair of goggles for the Children’s Hospital will go a long way in reducing recovery time for children and reducing wait lists in Manitoba.”

“Our thanks to Matt and his family for helping to make anything possible for the kids.”

The Children’s Hospital received its first and only pair of goggles in 2013, benefiting 850 children to date and reducing the need for sedation by 30 per cent, the Bombers’ statement said.

After weeks without in-person visits, Winnipeg woman and husband with Alzheimer’s reunite