You Are Here Home news ‘Fatigue is a concern for us’ as homicide investigations burn up Winnipeg police overtime hours, chief says 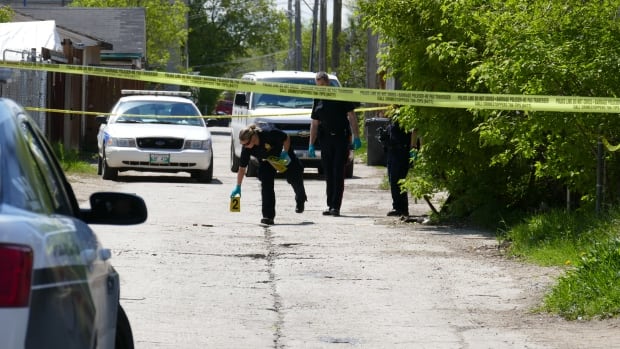 Police investigating the scene of a homicide on Simcoe Avenue on May 25, 2019. Winnipeg’s police chief says the impact of the 22 homicides the city has seen so far this year is felt throughout the force. (Jeff Stapleton/CBC)

“You can appreciate that they’re already dealing with a workload that would be normal for a full year. Fatigue is a concern for us,” said Winnipeg Police Service Chief Danny Smyth.

Police have paid out or banked the equivalent of more than 9,000 overtime hours for work on homicide cases alone this year. That number includes officers working time-and-a-half, double time or triple time, depending on the circumstances.

The burden of investigating so many homicides forced the police service to hand some cases over to the major crimes unit in order to give officers with the homicide unit a break, said Smyth.

The impact of these investigations goes beyond the homicide unit. Uniformed officers are called in to secure the scene and the forensics unit is brought in to gather evidence, for example.

With police resources tied up by homicide investigations, the backlog of less urgent calls for service can grow to the point where there are more than a hundred calls waiting for a response from police.

“It’s certainly frustrating for our members who see a call for service workload that sometimes is in the hundreds,” said Smyth.

The police force has cut overtime costs by about $1 million in the last two to three years, said Smyth, and he’s not aware of the service ever needing to ask for more budget money to cover overtime.

This year, overtime hours across the entire police service were down in the first quarter of this year, but a busy summer of homicide investigations could reverse that trend.

“Overall, we’re OK, but it’s something we’ll watch. If we continued on this trend, I don’t know that I would be under at the end of the year.”

At a meeting of the Winnipeg Police Board on Friday, board members Edna Nabess and Brian Scharfstein called on the city to cover whatever overtime costs were necessary to investigate homicides.

Police board chair Coun. Kevin Klein sounded a note of caution, saying it isn’t yet clear that the service needs more funds.

“When the time comes, if we feel more revenue is necessary to do the job properly then we’ll ask for that,” he said.

There are other areas where the police service could cut back, such as community programs, in order to save costs.

Police services across Canada are increasingly being called on to deal with issues that might be better handled by other levels of government, such as mental health, said Klein.

“We have to really start working and identifying these issues that police have taken on that should be put back to a different level of government to say, ‘this really is yours.'”