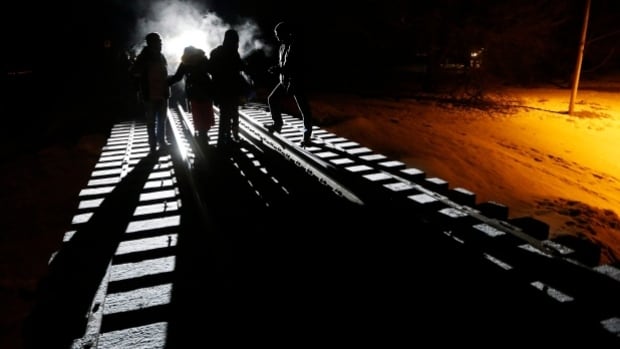 Asylum seekers walk up the rail tracks leading from the U.S. into Canada near Emerson, Man. (John Woods/The Canadian Press )

Manitoba is getting $5 million from Ottawa to offset provincial spending on interim housing for asylum claimants in the last two years.

The federal money, announced Tuesday evening, comes on top of $3 million sent to the province in June 2018 as part of a $50-million investment to Quebec, Ontario and Manitoba to help with a housing crunch caused by a spike in asylum seekers in 2017 and 2018.

The federal dollars will help offset $17 million in costs for the province, Manitoba Education and Training Minister Kelvin Goertzen said in a joint news release between Manitoba and Ottawa.

That money was spent on housing, welfare, education, Legal Aid, health care and child welfare, a spokesperson for the province wrote in an email Tuesday.

“The province will continue to negotiate with the federal government for full recovery of costs incurred,” the spokesperson wrote.

As of April, RCMP had intercepted 30 asylum seekers in 2019 between the ports of entry, according to the Immigration, Refugees and Citizenship Canada website.

Ottawa dedicated $60 million to the City of Toronto in two separate announcements in January and May to ease housing pressures, again coming on top of investments in June 2018.

“The Government of Canada is taking action to invest in the integrity of our border and asylum system,” Blair said in a release. “As a result, there has been a significant reduction in the number of individuals crossing the border irregularly.”