Janarion Grant took his shot again – he owed it to himself, after all – but when interest from the National Football League didn’t materialize, he knew he had a rather cushy landing spot. Hello, two-time Grey Cup champion Winnipeg Blue Bombers.

“It’s amazing now to be back,” began Grant in a chat with bluebombers.com this week from his offseason home in Florida. “I’ve built relationships with those guys in Winnipeg. It’s just a great feeling to be returning to that.”

A free agent since the market opened in February, Grant – who did crack the Baltimore Ravens roster as an undrafted free agent in 2018 – had his fingers crossed his return skills might land him an opportunity as a specialist in the NFL again. And all during that exploration period, the Blue Bombers patiently waited.

“There was no hold up (in contract talks with Winnipeg) or anything,” he said. “I was thinking about opportunities in the NFL and when that didn’t happen I knew I always had Winnipeg in the back of my mind, and I’d start back up with my championship team.” 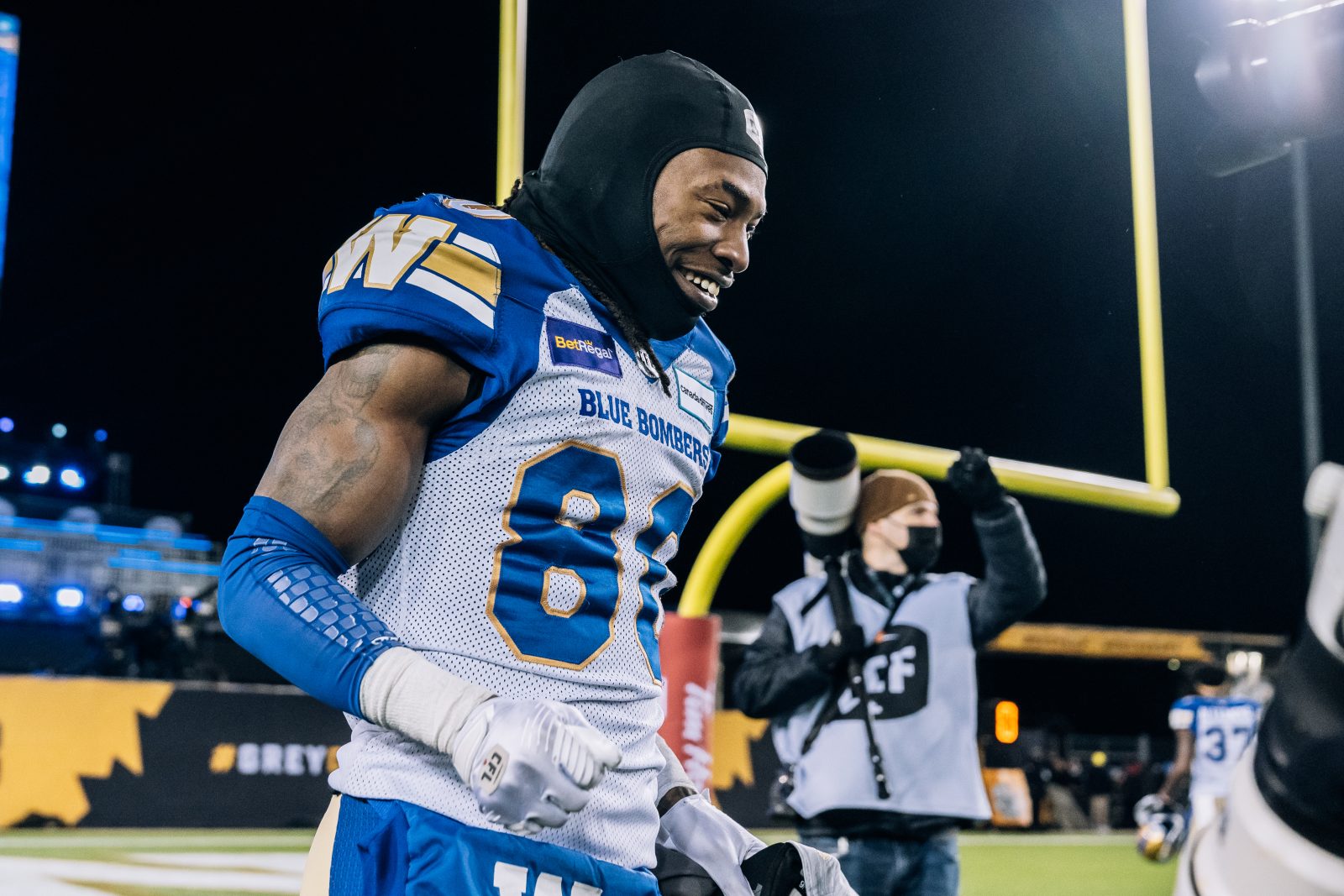 Grant’s signing solidifies the return game for the Bombers heading into ’22. He has four punt return touchdowns in just 17 regular season games and despite missing eight games last year, still managed to finish third in the CFL in kickoff return yardage and fourth in punt returns.

He said he had been in contact with Toronto, Saskatchewan and Edmonton since free agency began, but wanted to return to where is comfortable and where he can further chase his two goals this season.

“My No. 1 goal is to stay healthy,” said Grant, who works for Amazon in one of their factories in the offseason. “After that… I’m known as a kick and punt returner right now, but I’d like to get in the rotation at receiver and not labelled as just a return guy. I’m an athlete and I can play both if needed. That’s my goal – to get more involved.”

1. Grant’s desire to stay healthy this season… comes partly from frustration. If you recall, the Blue Bombers’ ace return man was injured in the first game last year and then spent the next few weeks in sick bay.

“It was frustrating,” he said. “We lost a season to Covid and I had stayed healthy through the whole training camp. And then I’m ready to go for the first game and it just happened to me.

“It was just one play… I had the ball and was trying to do what I do best. I got tackled and when I was on the ground another body fell on top of my leg, the leg I had broken in 2016 and I have a plate in there. Once I felt that, it felt like I broken it again. I just had to work through it.

“It was a freak thing that just happened out of nowhere with everybody out there playing hard. I was just thankful to get back towards the end of the season and be a part of another championship.” 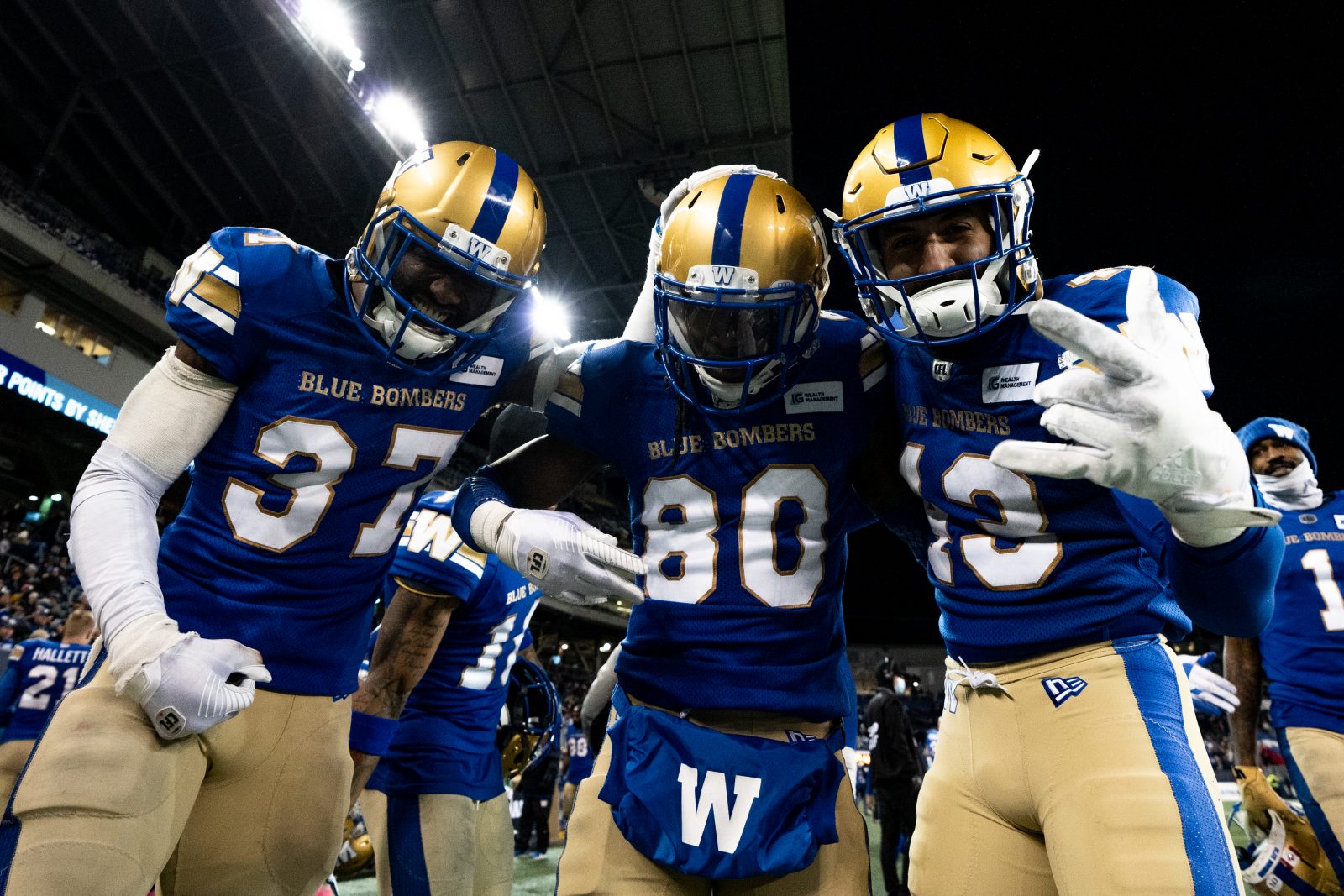 2. One more from Grant… we talked a bit about timing and fate and how those two things can impact a player’s career. Grant was first signed in the CFL by Hamilton in 2019 after his days in Baltimore, but with training camps here short the Rutgers University product had a short window to make an impression.

Released by the Tiger-Cats he surfaced in Winnipeg that summer and then, in his first-ever CFL game, went off with the kind of game players can often only dream of having. In a game against Calgary on August 8, 2019 Grant scored two touchdowns, racked up 222 punt-return yards – a Blue Bombers record and the third-highest in league history – and he finished the night with 306 total return yards.

A few months later he was helping lead the Blue Bombers to a Grey Cup title against the very team that had let him go.

“When I was in Hamilton was really just getting introduced to the CFL game with the Waggle, the splits and everything like that,” said Grant. “It was like I was just putting my foot in the water. I guess I didn’t show enough production in camp, I got released and Winnipeg called two weeks later. I was just so happy that I got a call because I just wanted to get back out there on the field and play the sport I love playing. It doesn’t last forever, even though you want it to last forever. Once I got that I was ready because I had my start on learning about the Waggle and everything.

“When I got to Winnipeg the guys took me in and let me in on everything. Lucky Whitehead was there. Kenny Lawler, Darvin Adams… those guys took me under their wings and helped me learn the game.

“That first game, I was thinking, ‘Shoot, I’ve got to make something happen.’ I just wanted to stay on the roster and not get cut as a rookie on a new team. Against the Stampeders in that first game I was just ready to have the ball in my hands and show the guys what I could do. The games are different than training camp. I was just ready to roll and those guys helped make it happen for me.”

3. It was an interesting week of receiver signings… for the Blue Bombers, with the return of Grant book-ended by the re-signing of Carlton Agodusi and then the addition of former Ticat star Jalen Saunders.

Agodusi, who we wrote about during camp last year, spent last season on the practice roster. He joins Blake Jackson as another prospect the club saw enough in to take another look this year. The Saunders signing is a no risk/high reward addition as if he is healthy, Saunders could be another home-run threat for offence.

On top of those signings, the team also added former Western Kentucky star Lucky Jackson, another receiver. Some highlights:

(400)
$75.69 (as of May 23, 2022 12:26 GMT -05:00 - More infoProduct prices and availability are accurate as of the date/time indicated and are subject to change. Any price and availability information displayed on [relevant Amazon Site(s), as applicable] at the time of purchase will apply to the purchase of this product.)

(159914)
$20.01 (as of May 23, 2022 12:26 GMT -05:00 - More infoProduct prices and availability are accurate as of the date/time indicated and are subject to change. Any price and availability information displayed on [relevant Amazon Site(s), as applicable] at the time of purchase will apply to the purchase of this product.)

The Wrong Side of Goodbye (A Harry Bosch Novel Book 19)

(10984)
$11.99 (as of May 23, 2022 12:26 GMT -05:00 - More infoProduct prices and availability are accurate as of the date/time indicated and are subject to change. Any price and availability information displayed on [relevant Amazon Site(s), as applicable] at the time of purchase will apply to the purchase of this product.)

(77872)
$12.28 (as of May 23, 2022 12:26 GMT -05:00 - More infoProduct prices and availability are accurate as of the date/time indicated and are subject to change. Any price and availability information displayed on [relevant Amazon Site(s), as applicable] at the time of purchase will apply to the purchase of this product.)

$14.99 (as of May 23, 2022 12:26 GMT -05:00 - More infoProduct prices and availability are accurate as of the date/time indicated and are subject to change. Any price and availability information displayed on [relevant Amazon Site(s), as applicable] at the time of purchase will apply to the purchase of this product.)