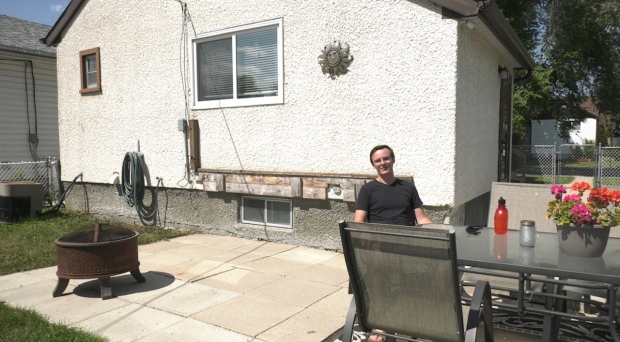 WINNIPEG — People who bought their first home during the pandemic are preparing for a new reality.

For many the appeal of owning a place grew as restrictions forced people to hunker down.

“It’s going to take a toll on my personal budget, I think, because there’s more things to spend money on,” said Evan Krosney. The 23-year-old bought his first home back in February in Winnipeg.

“In those kind of dark days of the pandemic, where there was no light at the end of the tunnel, I was thinking about all the money that needed to go into the house,” said Krosney. “All the renovations I wanted to do, the work I wanted to do in the yard—all of that stuff.”

But now Manitoba’s easing its public health restrictions and the province’s economy is slowly reopening.

That has many people, including Krosney, beginning to think about life beyond COVID-19. But for people who bought their first home during the pandemic it also means adjusting to balance the cost of owning a home with spending on activities like social outings, events and travel.

“All of a sudden all of these projects I want to do in the house are kind of getting put on the back burner because we can spend more money and we can actually go out and enjoy entertainment,” said Krosney.

Experts warn it’s a combination that could have serious implications on people’s personal finances.

“One of the big hot topics is what they call revenge spending,” said Sandra Fry, a credit counsellor with the Credit Counselling Society. “There’s some talk about what that’s going to look like.”

It could mean more trips to restaurants and pubs or to movies and concerts. Fry said for first-time buyers, making a budget and sticking to it will be key.

“And it’s okay to allocate money towards fun. Otherwise, why do we work so hard. But that fun needs to fit in your budget with all the things you have to pay for,” Fry said.

Steven Zheng, an accounting and finance professor at the University of Manitoba’s Asper School of Business, said in an email to CTV News that inflation may also pick up which could prompt the Bank of Canada to raise the interest rate to a higher level than initially expected.

“This may be the first surprise for people who just bought their first home,” Zheng wrote. “For those who borrowed variable rate mortgage loans to buy their home, they may face the second surprise of having to pay a much higher monthly mortgage payment than they initially planned.”

Adding to the challenge for first-time buyers, has been a hot housing market with many multiple offer situations driving up prices well beyond the asking price.

“As the pandemic begins to wane, and hopefully it does, that more and more people will be comfortable listing their homes,” Elston said. “As we get more listings coming to market, it’ll start to balance the market and there won’t be so many crazy multiple offers.”

Krosney’s happy with his decision to buy, his only regret is not doing so sooner.

He feels well prepared to handle the cost of returning to normal and is willing to hold off on cosmetic upgrades at home in order to accommodate spending on the highly anticipated end of the pandemic.

“I’m going to have to focus more on the needs,” said Krosney. “The things that are important for me to do in the house, put off some of the wants or the less necessary stuff because, realistically, there’s only so much money coming in at the end of the month.”