Homeless people living under the Osborne Street Bridge have been flooded out by rising water levels. (Tyson Koschik/CBC)

High river levels brought on by an intense snowstorm more than a week ago have forced people living in one of Winnipeg’s homeless camps to seek higher ground.

On Wednesday, the make-shift camp under the Osborne Street bridge was plunged below several feet of muddy water, leaving its residents displaced.

The only sign that there had once been life there were their belongings — shopping carts, newspapers, a pair of oven mitts, an umbrella — being carried away by the Assiniboine River.

Travis Bighetty, the coordinator of the West Broadway Bear Clan Patrol, said he’s worried about what happened to the people who were staying there.

“They are part of our community. We have gotten to know them,” said Bighetty. “It seems like most of the stuff they had is still at the bridge, and it’s flooded and wet now. We’re just wondering what they’ve taken with them, and to where.” 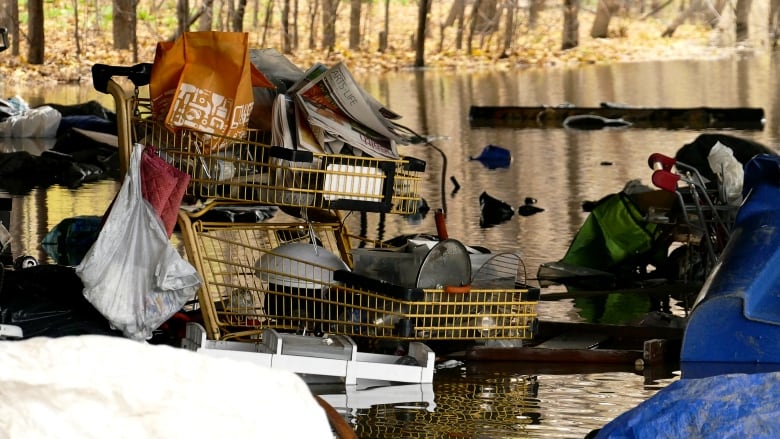 Debris and personal items floated near the banks of the Assiniboine River beneath the Osborne Street bridge on Wednesday. (Tyson Koschik/CBC)

The flood comes three weeks after a fire ripped through the small riverbank community, forcing the people who lived there to start from scratch.

The day of the fire, community members gathered donated sleeping bags, tents and supplies to help the affected people rebuild their camp.

Bighetty said the Bear Clan checked on the community on Saturday, and it seemed like they were planning to stay under the bridge for awhile. Now that they’re gone, he’s just hoping to hear they’re alright.

A spokesperson for the City of Winnipeg said the city is cleaning up the area under the bridge, following consultation with Main Street Project and the Winnipeg Police Service.