Kickoff: Saturday, 6 p.m. CDT, IG Field, Winnipeg.
TV: TSN; ESPN+
Radio: 680 CJOB
Home/Road: The Blue Bombers have the best home record in the CFL this season at 6-1 and are 25-2 at IG Field, including playoffs, dating back to the middle of 2018. The Elks, meanwhile, are 4-4 on the road. The Blue Bombers knocked off the Elks 24-10 earlier this year and have now won six straight against Edmonton dating back to 2019. That’s the longest win streak against Edmonton in club history dating back to their first meeting in 1938 and eclipses a five-game streak set over 1965-67.
BetRegal.ca odds: The Blue Bombers are favoured by 13 points. For more of Bet Regal’s numbers on this game, click here.
Streaks: Winnipeg: 1W; Edmonton: 1L.
Playoff picture: A win Saturday coupled with a loss by the B.C. Lions in Toronto in earlier in the day would clinch first place for the Blue Bombers for a second straight year. Winnipeg hasn’t finished first in its division in consecutive seasons since 1992-94, when the team finished atop the East Division three straight years with records of 11-7, 14-4 and 13-5.
Call to the Hall: The three inductees to the Winnipeg Football Club Hall of Fame – players Gavin Walls, Fred Reid and Lynn Bishop in the builder category — will be honoured at halftime. Walls and Bishop are expected to be in attendance while Reid, the running backs coach with the Ottawa RedBlacks, will be helping his team prepare for their Thanksgiving Monday meeting with the Montreal Alouettes. 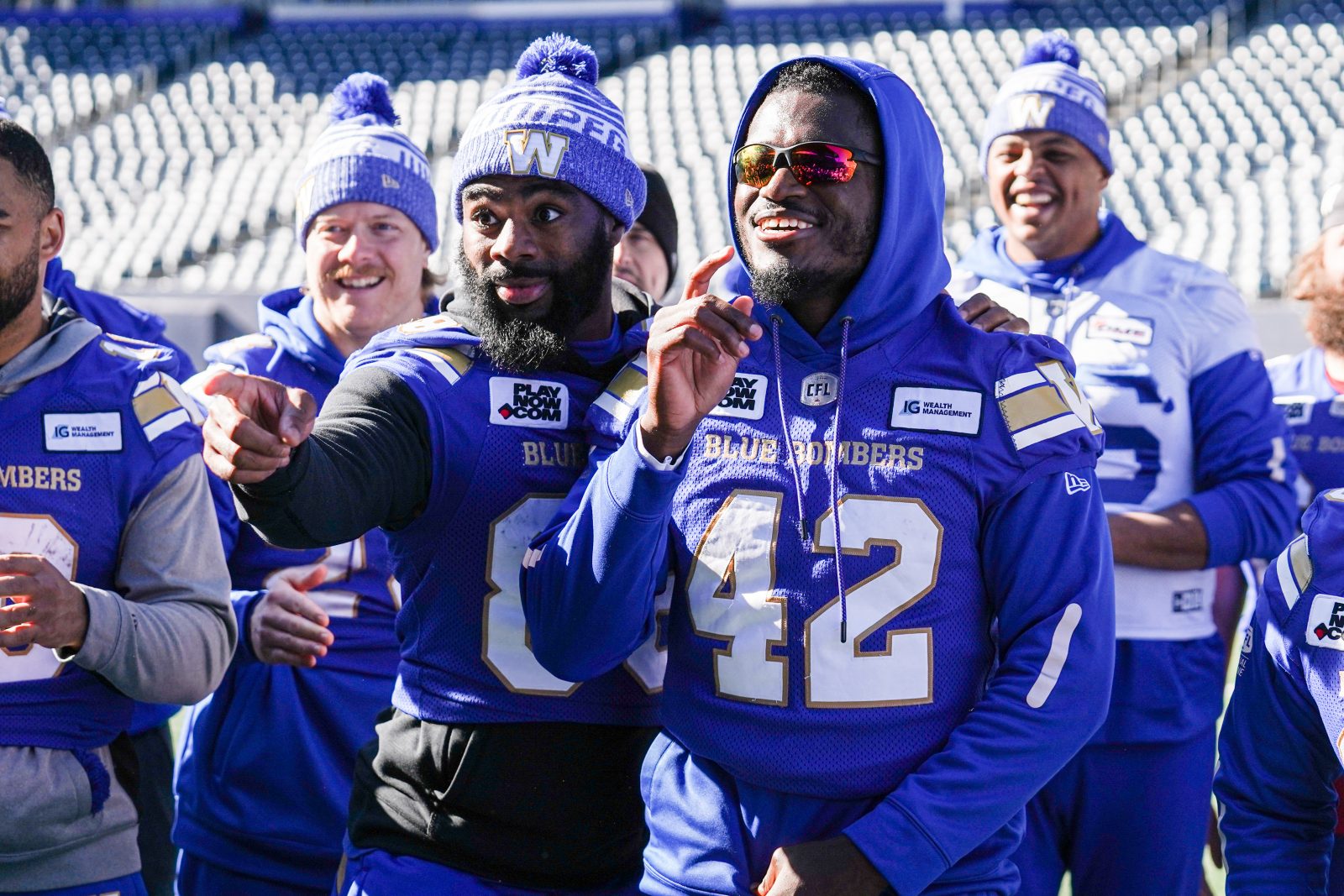 Coming aboard are DE Keion Adams and Global DB Souleymane Karamoko. Adams will start in Jackson Jeffcoat’s spot after Cedric Wilcots II worked there against the Riders. Wilcots II was traded to Hamilton earlier this week for DB Alden Darby, Jr., who has been moved to the one-game injured list.

The other notable depth chart move sees Canadian Redha Kramdi lining up at the dime spot ahead of Donald Rutledge, Jr., who is still dressing. 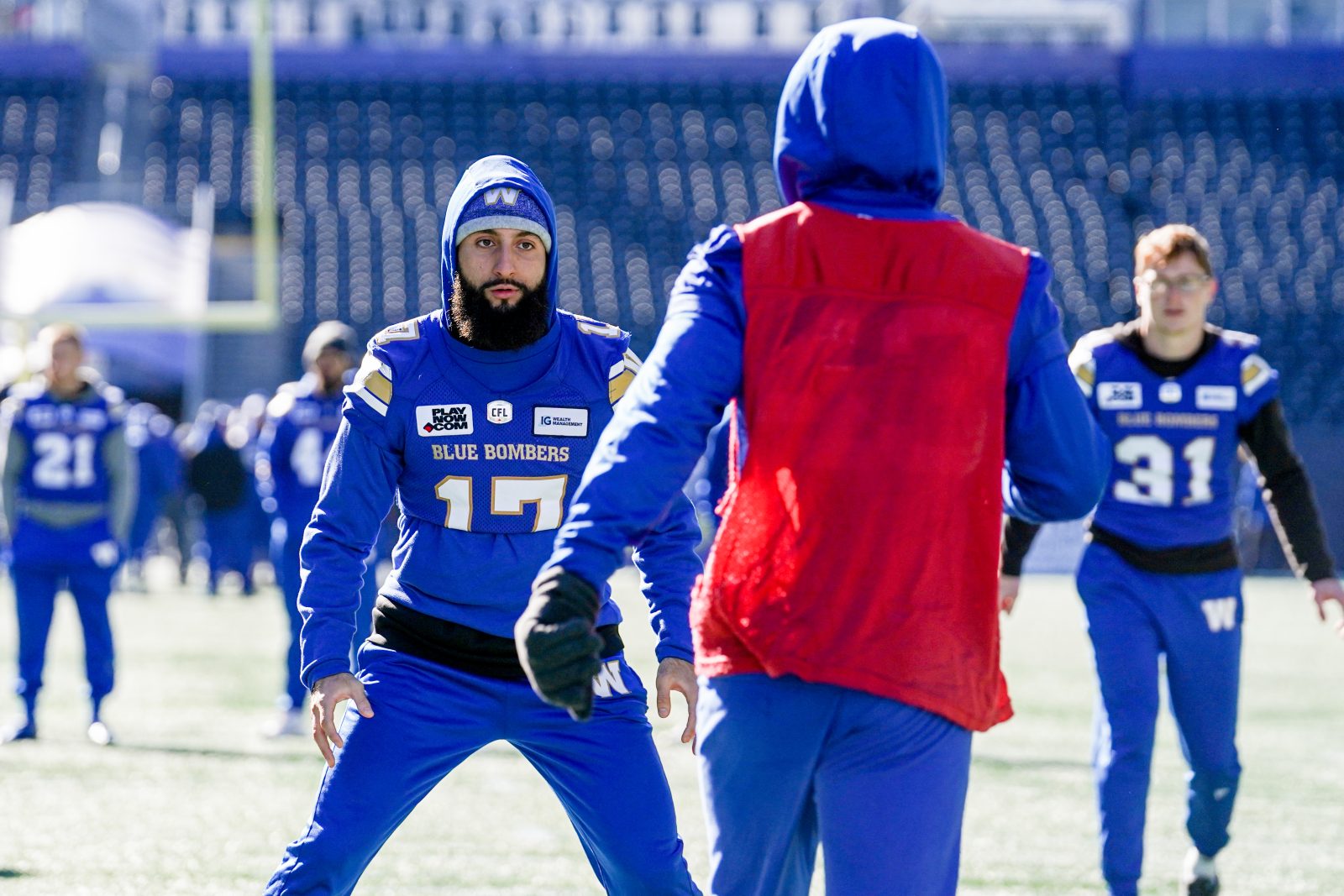 Kramdi will make his first start after dressing as a reserve for 21 regular-season games. He was selected by the Blue Bombers in the second round, 16th overall, in the 2021 CFL Draft.

“Since the beginning of the season I’ve been prepping myself if something happened to Rut (Rutledge, Jr.) and if the coaches ask me to go in, I’ll just go in because the defence has standards,” Kramdi said. “I prepare myself every week like I’m a starter, the only different thing this week is I’ve been given the start.

“This defence is surrounded by good football players. I’m not trying to do too much; I’m just trying to go out there, do my job and let the plays come to me.”

Kramdi played the same position in college at the Université de Montréal, where he first caught the Blue Bombers eye because of his versatility and his work on special teams.

Asked about his growth over the last year and a bit, Kramdi spoke of how challenging last season was, especially off the field, after losing his brother Sami last summer after he died suddenly in his sleep.

“Last year was hard, to be honest, because midway through camp I lost my brother,” he said. “So, I had to go home for the funeral and then come back and as soon as I came back, I pulled my hamstring and was off for a couple of weeks.

“Last year was hard. This year was a fresh start for me with a clear mind, a clear spirit and just make sure I’m me because last year I didn’t feel like myself. I would love to have (Sami) in the stands. Every day I think about him.”

Rutledge, Jr. had started the first 15 games at the position and head coach Mike O’Shea spoke of the switch after Friday’s walkthrough.

“We’ve got a lot of guys who are ready to play, and it’s Redha’s time. He keeps on improving in practice and showing he can do a lot for us, so we’ll give him a shot and see what he can do.

“(The change) is always a combination of things. Redha has played Canadian football for a long time, he’s a very good football player. Rut’s a rookie and in his first year and if you’re around and watching practice every day you see Redha making more and more plays as he goes along. He’s got a lot of grit, he’s very smart and a good communicator, very athletic and seems to be able to run all day, so all the stuff you like about him on special teams you like about him on defence, too.” 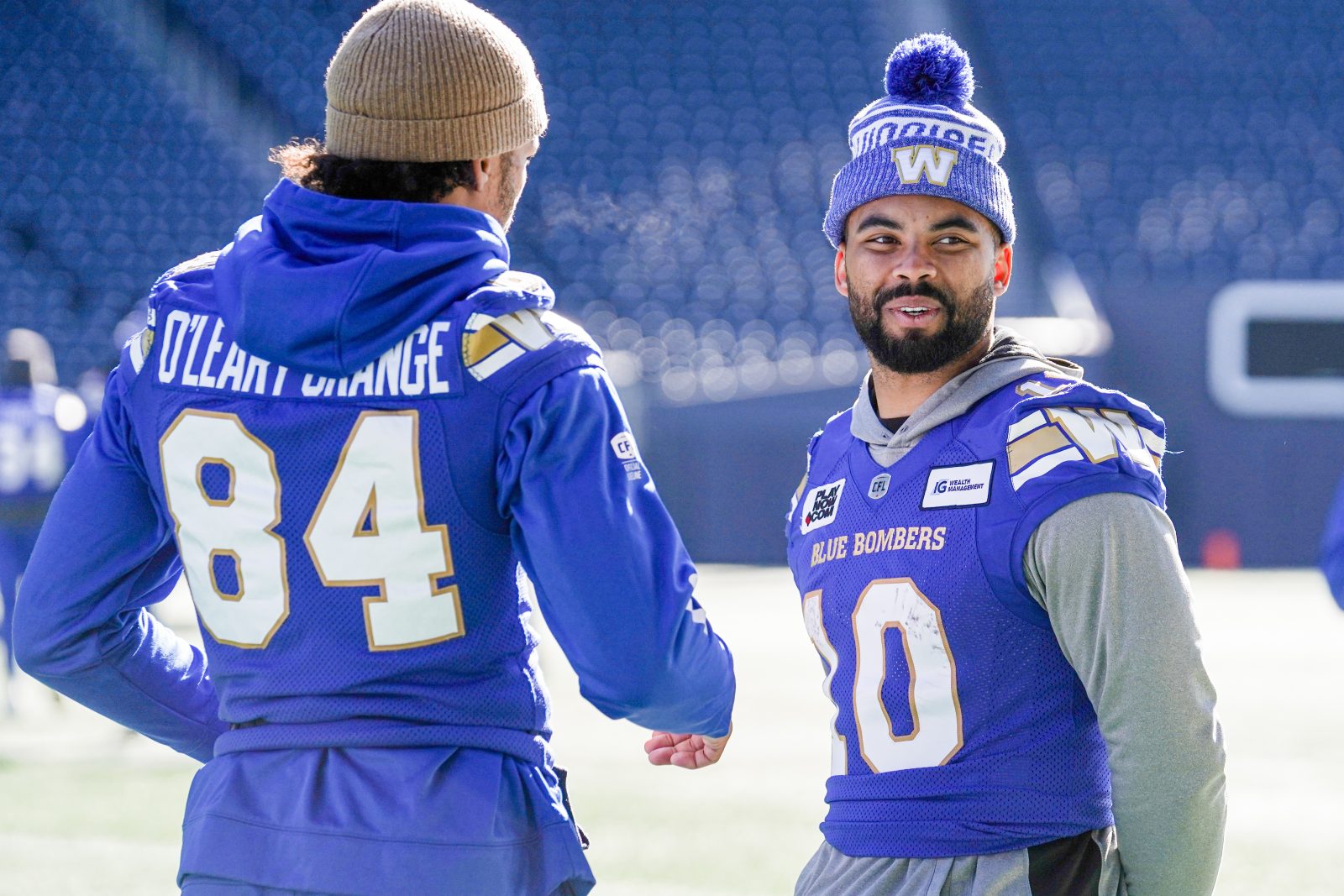 Nic Demski is working a five-game streak with at least one touchdown.  The last Blue Bombers player to score TDs in five straight games was Andrew Harris in 2018 and the last to score in six straight was Charles Roberts in September-October of 2006.

Of Dalton Schoen’s 57 receptions, 34 – or 60 percent – have been second-down conversion catches.

That is a new Blue Bombers record since the league started tracking that stat in 2004, breaking Derick Armstrong’s mark of 33, set in 2008. His 59.6 conversion rate on second-down catches is the highest in the league dating back to ’04, with three games remaining.

More praise about Brady Oliveira’s growth on Friday from both Collaros and O’Shea in a continuation of this story.

“Brady, even from the beginning of the season has done a really good job of what we’ve asked him to do,” said Collaros. “He’s gotten more comfortable in the run schemes that we do run. He’s certainly gotten better at that.

“I say it to you all the time, he does a really good job in protection standpoint and from a quarterback standpoint that’s very important. He’s very unselfish. He just wants to win games. He’s also a threat out of the backfield; I think he’s caught the ball really well in situations in games this year and continues to get better in practice. It’s definitely a strength of his.

“I think he’s a complete back. He’s physical as hell as you guys know from watching him run and he’s just going to continue to get better.”

“It’s pro football. You respect your opponent; you respect the game, and you do everything you can to do your job that week at a high level. There’s too much parity to overlook anybody and there’s a lot of talent over there and around the league. We understand that, and nothing changes in preparation no matter what the other team’s record is.” – Collaros, on the importance of respecting all opponents.

(1073)
$12.99 (as of December 5, 2022 10:26 GMT -06:00 - More infoProduct prices and availability are accurate as of the date/time indicated and are subject to change. Any price and availability information displayed on [relevant Amazon Site(s), as applicable] at the time of purchase will apply to the purchase of this product.)

(499)
$77.00 (as of December 5, 2022 10:26 GMT -06:00 - More infoProduct prices and availability are accurate as of the date/time indicated and are subject to change. Any price and availability information displayed on [relevant Amazon Site(s), as applicable] at the time of purchase will apply to the purchase of this product.)

(12060)
$4.92 (as of December 5, 2022 10:26 GMT -06:00 - More infoProduct prices and availability are accurate as of the date/time indicated and are subject to change. Any price and availability information displayed on [relevant Amazon Site(s), as applicable] at the time of purchase will apply to the purchase of this product.)

(17508)
$5.97 (as of December 5, 2022 10:26 GMT -06:00 - More infoProduct prices and availability are accurate as of the date/time indicated and are subject to change. Any price and availability information displayed on [relevant Amazon Site(s), as applicable] at the time of purchase will apply to the purchase of this product.)