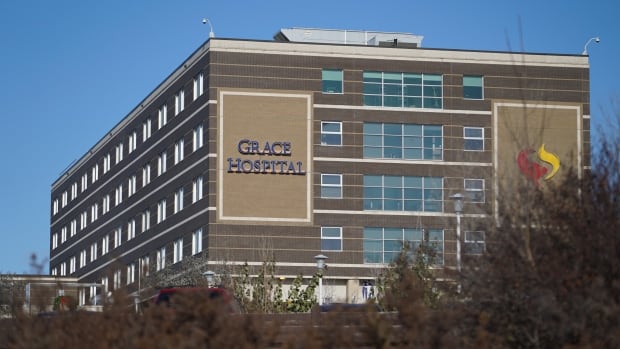 Amid chronic and crippling nurse shortages and a surge of patients with COVID-19, the WRHA is asking public health nurses to help staff the Grace Hospital’s emergency department.

An email sent by the authority to public health nurses in Winnipeg Thursday asked for volunteers to work in the ER this upcoming weekend and “potentially for several weeks.”

“They’re in dire straits there for staffing. Nurses are concerned that this is a voluntary thing … what if no one steps up and volunteers?” said Darlene Jackson, president of the Manitoba Nurses Union.

“That is not normal and I cannot even imagine those nurses in that emergency department as busy as the Grace is,” said Jackson.

“I can’t imagine two nurses working there. That would be terrifying if it were me, if I were one of those nurses.”

Jackson said attrition is a major factor at the Grace, with one in three positions in the emergency department currently vacant. She said the hospital’s medicine unit has a 32.1 per cent vacancy rate and its resource team, or the group of nurses that provide relief on short notice, has a vacancy rate of 71 per cent.

Jackson said the Grace has been particularly bad for staff shortages and heavy patient loads since the consolidation of Winnipeg hospital emergency rooms in 2019, but the pandemic turned that into a full-blown crisis it hasn’t recovered from.

“Nurses are exhausted. They can not do any more, they can not pick up any more. They have been mandated they are working so much overtime, I think that they’re just grasping at straws and just doing anything they can to try and staff those departments,” she said.

Nurses redeployed to critical care and emergency care during the two worst waves of COVID-19 in the province had only just returned to their original specialities, she said, creating worry that this will cause more disruption and displacement.

Surge in demand at hospitals: WRHA

In a statement to CBC News, a WRHA spokesperson wrote that hospitals across the province are experiencing a surge in demand, and the health care system is “committed to addressing the situation and ensuring a high level of care to all who need it.

“Recruitment to hire more nurses across the system is active and ongoing,” wrote the spokesperson.

The government plans to spend $19.5 million to add 259 nurse training seats at colleges and universities across the province this year.

Jackson said in 2021 Manitoba nurses worked more than 992,000 hours of overtime, nearly the same amount accrued by nurses in all of Canada four years ago. The province doesn’t have the same ability to lean on private-sector nurses to help fill the holes either, she said, as they’re leaving for more competitive salaries and incentives.

“We have tons of agency nurses in Manitoba but they’re all working in the western provinces,” she said.

Jackson said it’s critical the province prioritize getting retired nurses and internationally educated nurses registered so they can get into and stay in Manitoba’s system.

“Bring those nurses back and support those new grads so that they stay in the system,” she said.

She said the union has been sounding the alarm on the nursing shortage for the past five years, and now it’s the worst it’s ever been.

“Retention of the nurses that we have in the system right now is the only thing that’s going to save us. But for some reason, the government isn’t willing to make it competitive enough for them to stay in the system.”