1. HOMETOWN ADVANTAGE?: The Ticats held their first practice of Grey Cup week at Tim Hortons Field — their home turf — but the Bombers opted to hold their session at nearby Ron Joyce Stadium on the McMaster University campus.
It’s one of the talking points early in Grey Cup week, with the Ticats able to stay at home before moving into a hotel on Friday. There’s also all the other amenities like being in your own locker room and all the familiarities that come with playing in your backyard.
Andrew Harris has been there before, back in 2011 as a member of the B.C. Lions when they knocked off the Blue Bombers in the Grey Cup at B.C. Place in Vancouver.
All that said, the Bombers do remain 3.5-point favourites for Sunday.
“I hadn’t really thought about that, but it’s definitely a big advantage,” said Harris. “For the most part you’re in your home facilities and you get to wake up in your own bed… those are all great things. And then, obviously, there’s the crowd, the crowd noise and being in your own place that you’re used to is nice as well.
“A lot of people look at those as big advantages, but at the end of the day you’re professional, you prepare the right way and once you get on the field the crowd shouldn’t really be that much of a factor because you’re locked in and focussed. You’ve just got to tune in and get the job done.”
There’s also a long-standing bitterness some Ticat faithful have for Bombers head coach Mike O’Shea, who left the club for the hated Toronto Argonauts twice. 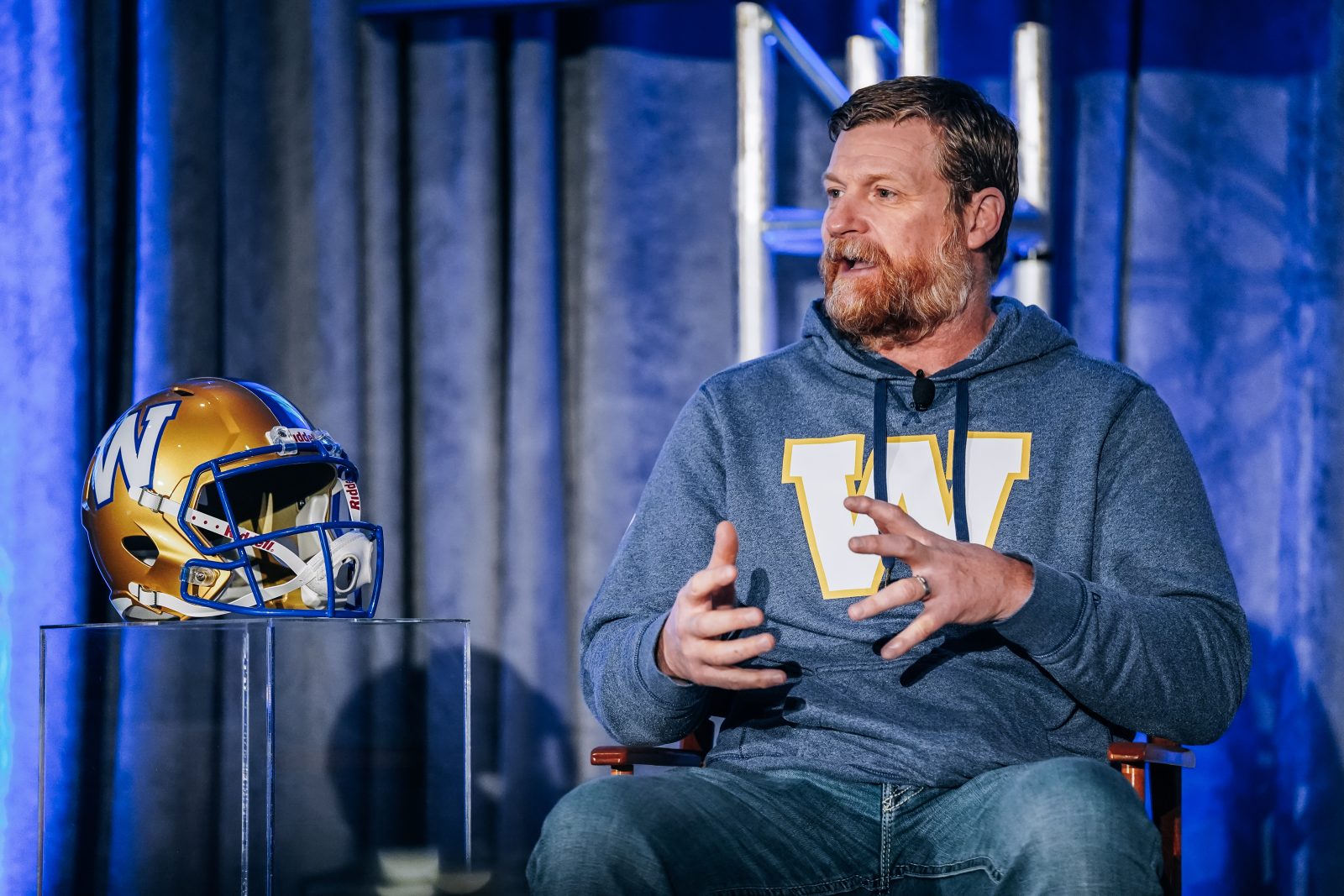 Asked if that relationship is less ‘vigourous’ now because he is a head coach now and not a player, O’Shea grinned and added:
“There’s a couple guys behind behind our bench that are ‘full of vigour.’ The joke or some of the messaging I’ve been getting from the guys who were around during that first transition to Toronto from Hamilton, some of them are glad that D-cell (batteries, which they used to throw at him) aren’t as prominent as they used to be various points like that.
“One trainer said I should still wear a helmet just in case. I think it’s calmed down quite a bit, but there is there are a few fans and still feel jilted.”

2. ONE IS GOOD, TWO IS BETTER: Nic Demski was asked Wednesday what it would mean to he the first Blue Bombers team to win back-to-back Grey Cups since the 1961-62 squad. 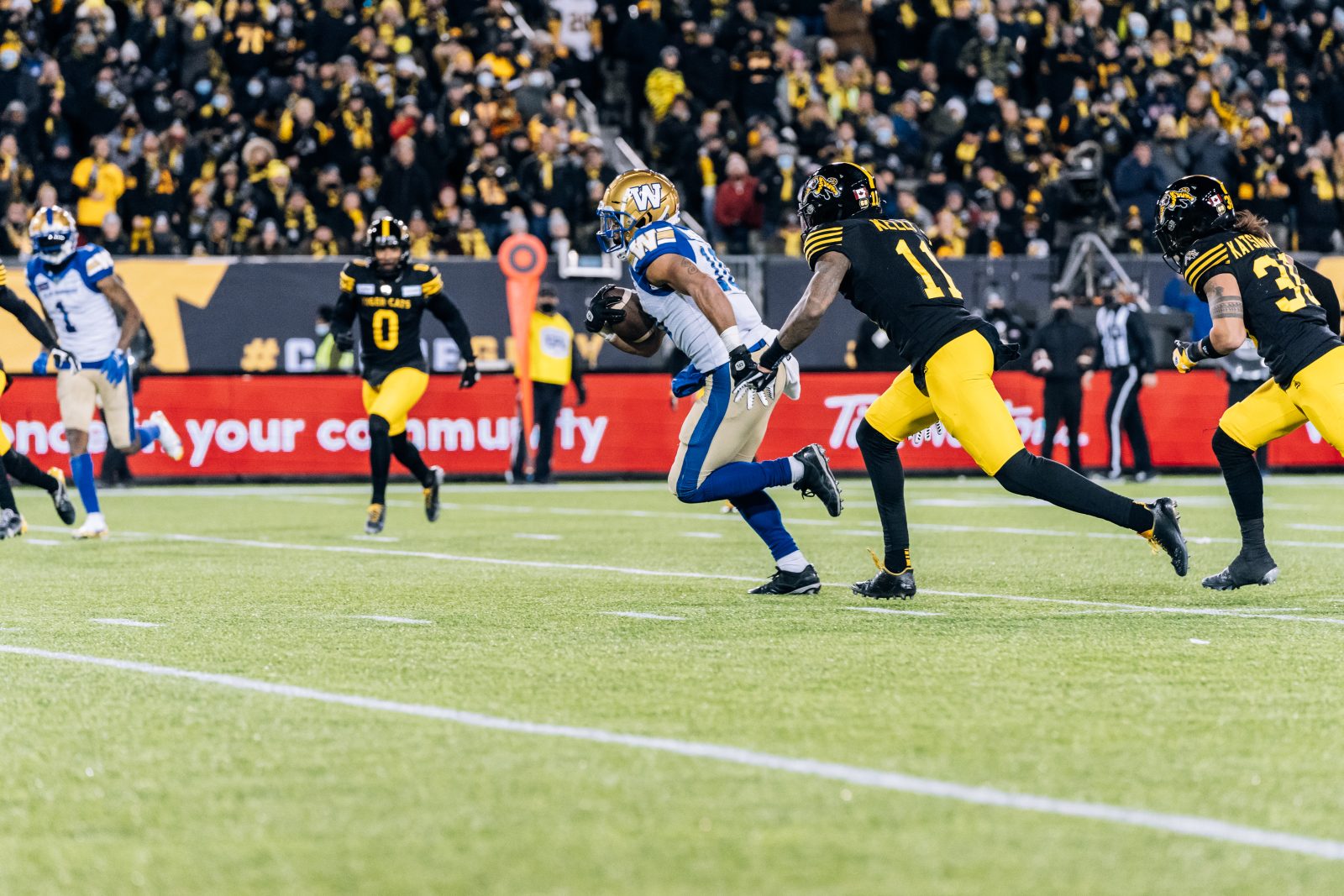 “It would mean a lot,” he said. “I’d be lying to you if I said it wasn’t in the back of my mind. But we’ve got to focus on going 1-0 this week and getting that Grey Cup. Obviously that would be a crazy accomplishment, but I don’t want to get too far ahead of myself yet. So, hopefully you can ask me that Sunday and I’ll have a better answer for you.”

3. CENTRE OF ATTENTION: We told the story last week of Bombers centre Michael Couture and how difficult it was for him to miss the 2019 Grey Cup due to injury. He’ll be in the lineup on Sunday and he won’t be alone in his joy to be back in the middle of the offensive line.
“I’m extremely excited for him,” said Pat Neufeld, Couture’s roommate during the season. “He was emotional after that game, not realizing that he finally get a chance to play in this game. He’s been through a lot, both physically and personally just to get to this game. So, to see him after the opportunity to go and compete against a really good Hamilton team is exciting. He knows what’s at stake and ultimately he’s just like all of us — he doesn’t want to let us down and he’s going to go out and compete he butt off.”

4. ONE MAN DOWN: The Bombers won’t have OL Tui Eli available on Sunday. He is the one player who chose not to get vaccinated and because of travel restrictions is not here at the Grey Cup.
Asked about that on Wednesday, head coach Mike O’Shea said only: “He wasn’t able to travel.”
Here is Wednesday’s injury report from Bombers sick bay:

5. QB NEWS FROM THE TICATS: Hamilton head coach Orlondo Steinauer confirmed Wednesday morning that Dane Evans will start for his club on Sunday. Evans started the 107th Grey Cup against the Bombers in Calgary in 2019, but Jeremiah Masoli had been the starter this season. Evans came off the bench in the Eastern Final and was excellent in leading his squad to a comeback win.
Asked how he managed that decision, Steinauer said:
“It was more managed by the two people that are better players, meaning Jeremiah and Dane. It was transparent from the start from being able to sign both of them. They understood only one was going to be able to start and the other one was going to be disappointed.
“I remember the first time when I brought him in, Dane was definitely disappointed (he wasn’t starting at the beginning of the season), Jeremiah was humbled — he wasn’t jumping for joy. It was a highly competitive camp. So, managing it is to me was just about you want something you just out in front it’s communication and being authentic with them and they’ve earned that they’re there. They’re ‘A’ people. They’re ‘A’ quarterbacks obviously. And so you have to make a decision, you can’t you can’t start them both. It’s never easy because I don’t like letting people down. But you got to make a decision. That’s what I get paid to do.”

(4)
$17.99 (as of January 24, 2022 10:33 GMT -06:00 - More infoProduct prices and availability are accurate as of the date/time indicated and are subject to change. Any price and availability information displayed on [relevant Amazon Site(s), as applicable] at the time of purchase will apply to the purchase of this product.)

It Ends with Us: A Novel

(26266)
$15.09 (as of January 24, 2022 10:33 GMT -06:00 - More infoProduct prices and availability are accurate as of the date/time indicated and are subject to change. Any price and availability information displayed on [relevant Amazon Site(s), as applicable] at the time of purchase will apply to the purchase of this product.)

(20)
$29.99 (as of January 24, 2022 10:33 GMT -06:00 - More infoProduct prices and availability are accurate as of the date/time indicated and are subject to change. Any price and availability information displayed on [relevant Amazon Site(s), as applicable] at the time of purchase will apply to the purchase of this product.)

(214)
$29.99 (as of January 24, 2022 10:33 GMT -06:00 - More infoProduct prices and availability are accurate as of the date/time indicated and are subject to change. Any price and availability information displayed on [relevant Amazon Site(s), as applicable] at the time of purchase will apply to the purchase of this product.)

(15)
$42.89 (as of January 24, 2022 10:33 GMT -06:00 - More infoProduct prices and availability are accurate as of the date/time indicated and are subject to change. Any price and availability information displayed on [relevant Amazon Site(s), as applicable] at the time of purchase will apply to the purchase of this product.)