The Winnipeg Football Club have officially welcomed three new members to its Hall of Fame – Fred Reid and Gavin Walls as players, and former club president Lynn Bishop – with the trio to be saluted at halftime this Saturday. This is the second of our profiles on the new inductees.

It’s virtually impossible not to reminisce on occasions like this, and being inducted into the Winnipeg Football Club’s Hall of Fame has certainly given Gavin Walls the opportunity to do a long trek down memory lane.

So, let’s begin here: Walls travelled many, many places during his playing days, from Virginia to Kansas, to Arkansas, to Minnesota, to Scotland and, ultimately, to Winnipeg. And the story of how a kid from Ripley, Mississippi – a small town in the northern part of the state not too far from the Tennessee border – wound up calling Manitoba home has more than a few layers to it.

“When I was a kid in Mississippi my grandmother lived just down a dirt road from us,” said Walls in a chat with bluebombers.com. “I used to have to carry these gallon jugs of water every day so that me, my mom and my sister could take baths because we didn’t have plumbing. I’m not talking about a third-world country, I’m talking about right in the Southern U.S. 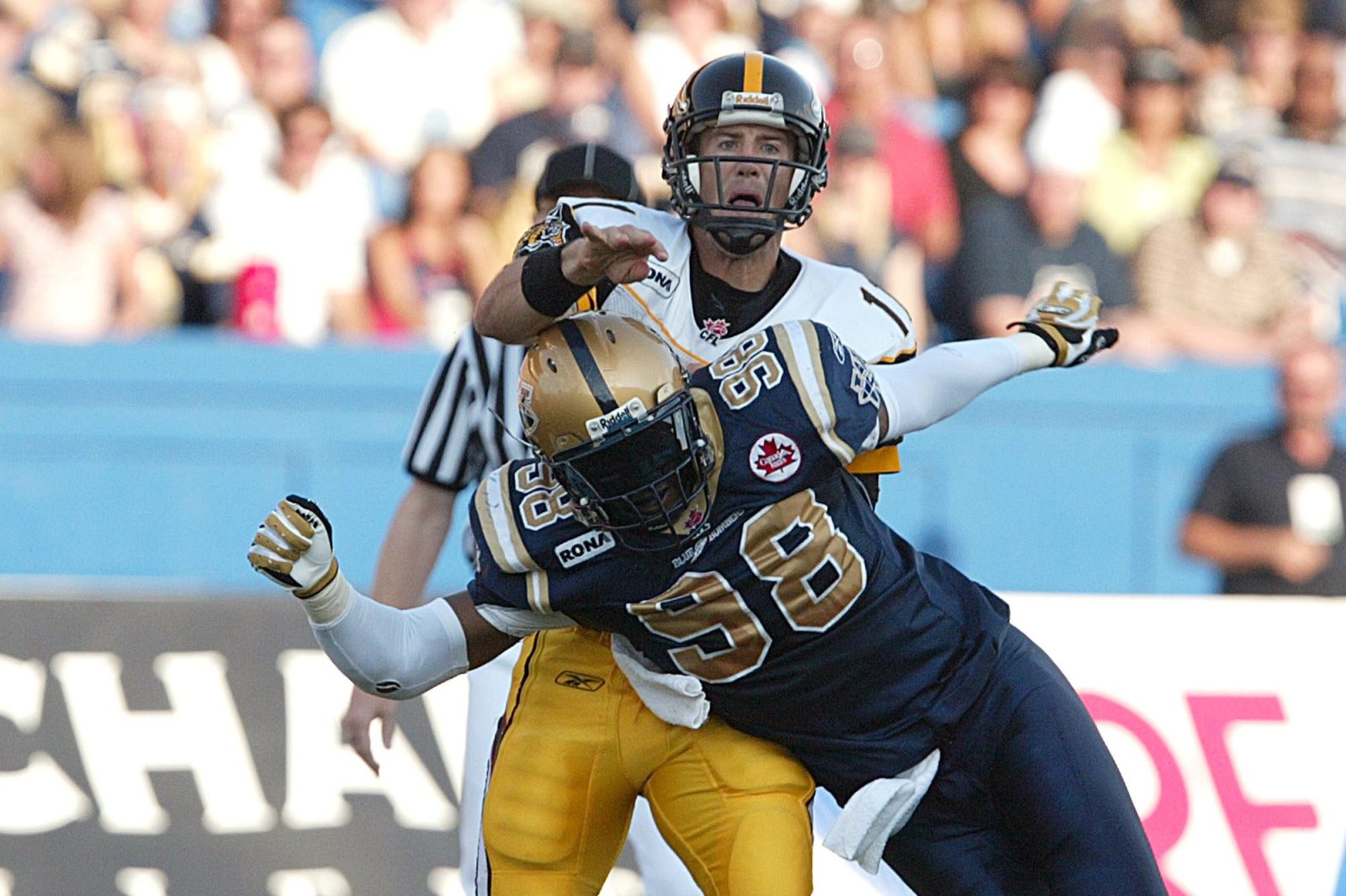 “I can still remember there was this dog in our neighbourhood and one day it started to chase me. I saw it coming and so I dropped the jugs and ran as fast as I could and jumped on a car near the house where we lived. At that point I knew I was fast because that dog never caught me.”

Walls chuckled telling that story, and those who know the man best will attest that’s one of the most endearing parts of his infectious personality. He’s amiable, he’s a caring and giving person and he’s oh-so grateful that he not only was able to play with the Blue Bombers, but subsequently put down permanent roots here.

“I was sure thinking about that when I got the news about being inducted in the hall of fame – not bad for a guy who went from carrying water in Mississippi every evening to make sure we had drinking water and bath water,” he said. “I got to play in a great city like Winnipeg and to get something like this is phenomenal.

“Never would I ever have thought of something like this would happen to me. I’ve been blessed.”

During his youth Walls played for Phoebus High School in Hampton, Va. – his family having moved there when he was five – before signing with Coffeyville Junior College in Kansas and then transferring to the University of Arkansas.

He was signed by the Minnesota Vikings as an undrafted free agent in 2004 and, after his release, then selected in the fifth round of the NFL Europe Draft by the Scottish Claymores, a squad which played its home games in Edinburgh and Glasgow. He signed with the Blue Bombers in 2005 and, unlike a lot of Americans who travel north, already had a good base of knowledge about the three-down game.

“I was always optimistic about the possibility of playing in the Canadian Football League from the get-go,” Walls explained. “And it all goes back to me collecting cards as a kid, including hockey, and that’s how I started to get familiar with some sports and leagues. We went to a lot of card shows when I was a kid and there are a few older CFL cards I had like Dieter Brock and Warren Moon. 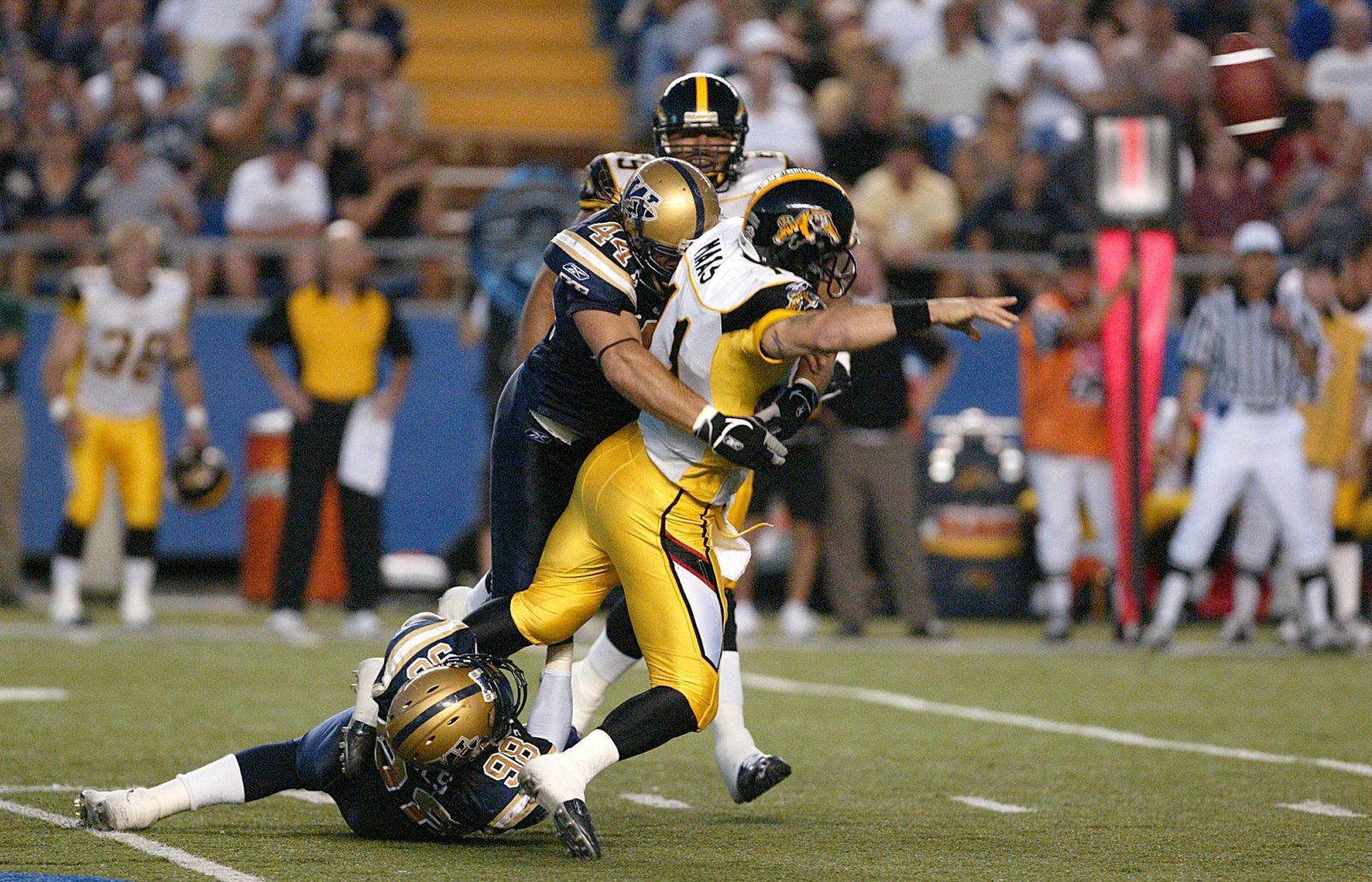 Walls arrived in Blue Bombers camp that spring to find the defensive line already dominated by the likes of Doug Brown and Tom Canada. Uncertain about his immediate future, Walls simply put his head down and started grinding just to land a roster spot.

“When I got to Winnipeg there were already household names on the defensive line, so I was just trying to figure out where I could contribute,” he said. “And then as training camp goes along you start seeing less and less guys coming into the meeting rooms. I just kept saying my prayers.

“They had a lot of good players in that camp. But even to this day and with work I try not to worry about competition – I just focus on what I need to do, what I need to improve on, and everything else just settles itself out.

“I made the team. It was an interesting year. Jim Daley was a first-year head coach. We didn’t have a great record, but we had a really good football team.”

Walls didn’t just make the Blue Bombers that year, he stood out instantly by leading the club with 12 quarterback sacks and even added two touchdowns. All those numbers added up to being selected as the Canadian Football League’s Most Outstanding Rookie.

“The sacks were one thing, but after playing linebacker and being a hybrid guy, getting tackles was something I wanted to make sure I was getting, too,” he said. “The sacks will come when you’re putting pressure in the backfield.

“I have to give a lot of credit in my first year to Doug Brown. He’s a huge guy, and he would hug like, five offensive linemen with his huge wingspan and that made it easier for me. It was one play at a time for me. I tried to teach kids that and even the managers I work with – one play, one day at a time.”

Now the general manager of the Moosehorn Co-op after beginning his post-playing career in the oil and gas industry in Fort McMurray, AB, Walls met his future wife Lauren in 2006 – “Lauren and her mom Sue fed me all this Ukranian food… I guess it’s true about winning a man through his stomach” – and the couple now have five boys: Tyrin (17), Bentley (9), Theo (7), Makai and Zander, who was born just a few days after Walls got his welcome-to-the-hall telephone call from committee chairman Reg Low.

“I was driving, and I saw an e-mail come in on my other phone and wondered who it was from,” said. “I was stopped because of construction and when I called and Reg told me the news, well, I was quite ecstatic. It’s phenomenal news. And then we had another son a couple of days later. That was a crazy week. A good week.”

(499)
$77.00 (as of December 5, 2022 10:26 GMT -06:00 - More infoProduct prices and availability are accurate as of the date/time indicated and are subject to change. Any price and availability information displayed on [relevant Amazon Site(s), as applicable] at the time of purchase will apply to the purchase of this product.)

(29093)
$34.99 (as of December 5, 2022 10:26 GMT -06:00 - More infoProduct prices and availability are accurate as of the date/time indicated and are subject to change. Any price and availability information displayed on [relevant Amazon Site(s), as applicable] at the time of purchase will apply to the purchase of this product.)

(1073)
$12.99 (as of December 5, 2022 10:26 GMT -06:00 - More infoProduct prices and availability are accurate as of the date/time indicated and are subject to change. Any price and availability information displayed on [relevant Amazon Site(s), as applicable] at the time of purchase will apply to the purchase of this product.)

(393)
$14.99 (as of December 5, 2022 10:26 GMT -06:00 - More infoProduct prices and availability are accurate as of the date/time indicated and are subject to change. Any price and availability information displayed on [relevant Amazon Site(s), as applicable] at the time of purchase will apply to the purchase of this product.)