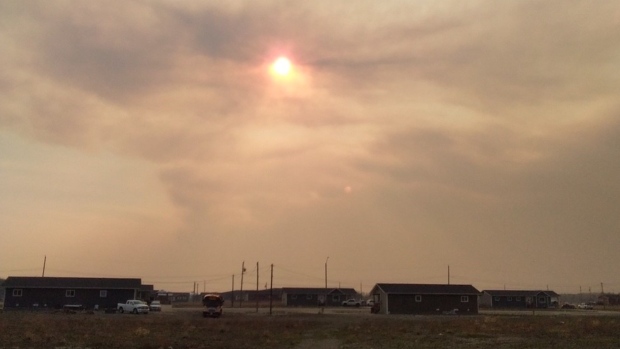 WINNIPEG — Wildfires in the northern Interlake have forced hundreds of people from their homes.

The biggest fire is burning over a massive area north of Lake Manitoba stretching approximately 80 kilometres from Homebrook, north to Devil’s Lake.

The now 200,000 hectare wildfire is impacting several nearby communities.

But as crews continue to battle the flames, residents in five nearby First Nations have been forced to flee due to deteriorating conditions.

Heavy smoke from the Homebrook fire and others in the area, has led to evacuations in the Lake St. Martin, Little Saskatchewan, Pinaymootang, Skownan and Dauphin River First Nations. At least 750 people have had to leave to their homes.

Evacuees are now staying in hotels in Dauphin and Winnipeg. For some, especially those from Lake St. Martin leaving comes with a mix of emotions – among them, some relief.

“Especially for the little babies…infants and elders,” said Irene Ross, who had to leave her home in Lake St. Martin.

But many have only recently returned to the First Nation after being displaced for years following the flood of 2011.

The IRTC, which three of the affected First Nations are a part of, has been assisting with the evacuation effort.

“Some of these First Nations have just finished building their communities back,” McLean said.

Smoke from the fires has also prompted several road closures. Highway 6, a major route to central and northern Manitoba, has been closed between Highway 60 and the Lake St. Martin junction.

Of 30 fires across the province, seven are listed by the province as burning out of control.

The biggest fire and the one generating the most smoke is the Homebrook fire. It’s mainly burning on Crown land west of Highway 6 between Homebrook and Devil’s Lake, according to Don Hallett, assistant director of the Manitoba Wildfire Service.

“Over the past couple of days, it has grown immensely due to the strong southerly winds and dry conditions,” Hallett said in a phone interview.

Hallett said the fire is threatening some camps and cabins but they’ve set up sprinklers to protect properties at risk. Protection efforts are also underway to save some Manitoba Hydro assets, according to a provincial fire bulletin.

Some residents in the affected First Nations left by bus Wednesday night and the Canadian Red Cross is assisting with the evacuations.

The province said Thursday recent cool, wet weather is helping to reduce the fire risk in some parts of Manitoba while the risk remains high to extreme in other areas.

Backcountry travel bans remain in place, but the province said due to the rain, restrictions on campfires have been eased in eastern Manitoba and Turtle Mountain Provincial Park. Campfires in approved pits are once again permitted between 8 p.m. and 8 a.m. in those areas (including Whiteshell, Nopiming, Moose Lake, St. Malo, Birds Hill, Grand Beach and Spruce Woods Provincial Parks). No campfires are permitted at any time in any other provincial park below the 53rd parallel or central Manitoba.

All trails and water routes in provincial parks south of the 53rd parallel remain closed.