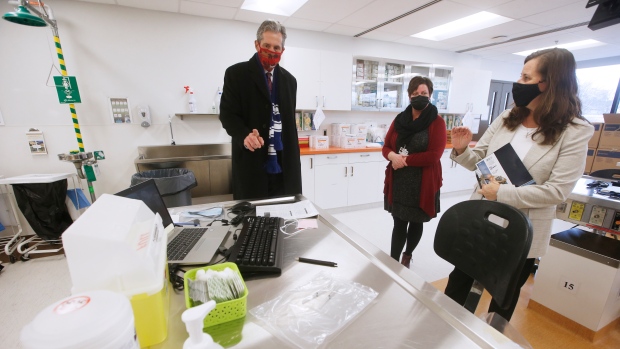 WINNIPEG — Manitoba’s premier was given a look at the province’s first COVID-19 vaccination clinic where the first dose is scheduled to be given to a Manitoban this week.

“I think all of us have pre-game jitters right now. We’re really excited. This is hope,” Pallister said following a tour of the clinic located at Health Sciences Centre.

The centre has seven stations and specialized freezers that can safely store the Pfizer vaccine doses at -80C.

The first injection is expected Wednesday morning, and Pallister said injections for the first eligible recipients will take place over three days.

“They’ve told me that they’re going to start, not with speed as the goal, but with accuracy as the goal,” Pallister said.

Dr. Brent Roussin, the chief provincial public health officer, said only 900 doses of the vaccine are available to Manitobans during this first round. These doses will be going to health-care workers in high-risk situations.

Roussin said the limited number of doses will allow health officials to conduct a test run at the clinic to iron out any potential issues for future, larger facilities.

“This is the benefit of receiving that relatively small amount early is we get to work through a lot of these things early on.”

Manitoba will not be the first to administer the vaccine. Vaccinations in Quebec and Ontario are already underway.

Alberta announced it’s getting 25,000 doses for its second vaccine shipment.

Pallister wouldn’t say how many doses Manitoba has been promised, but said he would report it when they get to the province.