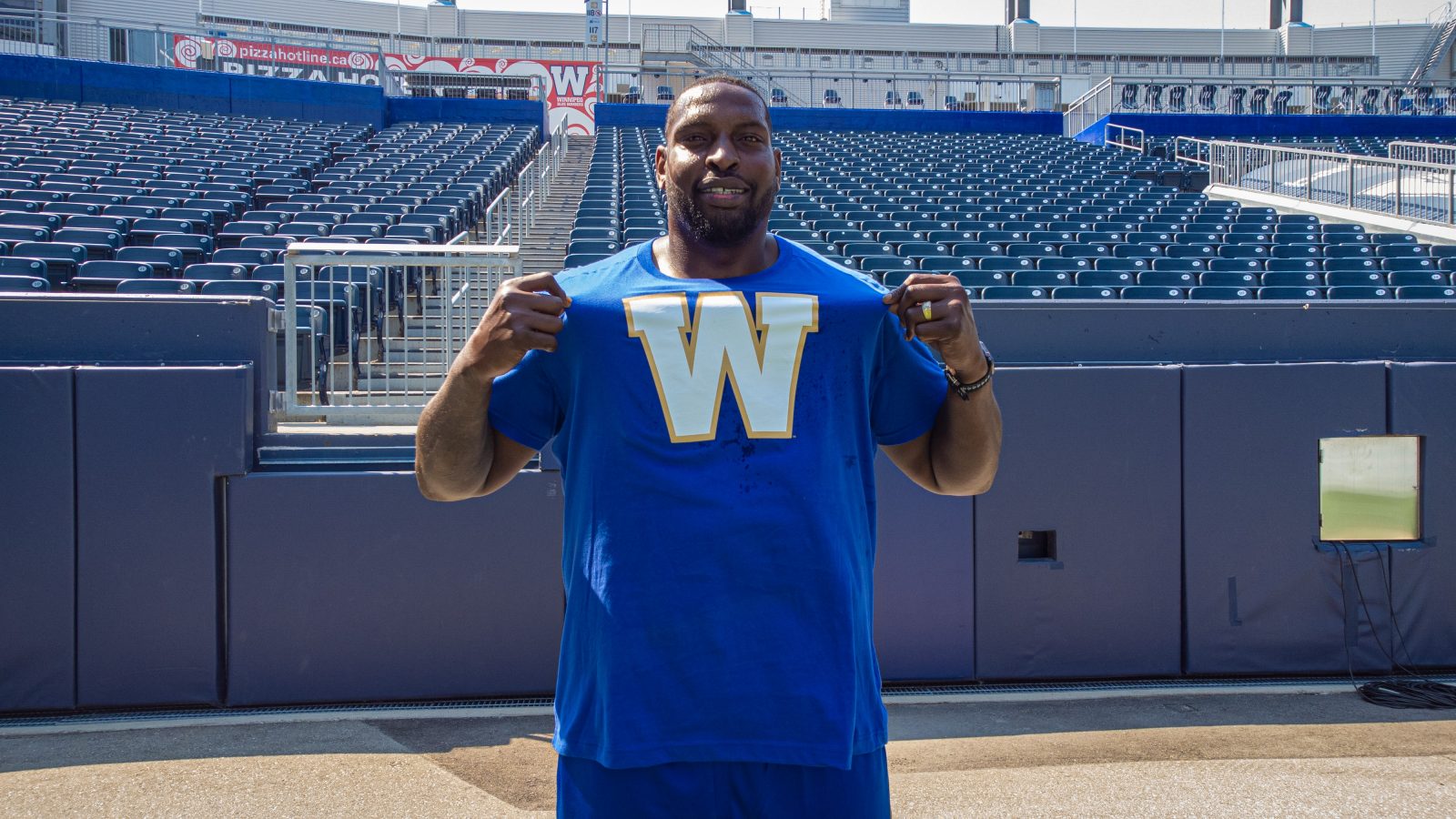 Winnipeg Blue Bombers right tackle Jermarcus Hardrick met with the local media via Zoom on Friday and his trademark enthusiasm bubbled over and through everyone’s computer screen in the process. No one should have expected any different, to tell the truth.

In fact, over the course of a nine-minute session he unofficially used the words ‘excited’ or ‘excitement’ a dozen times. And think he missed Winnipeg and IG Field? Check this out:

not to be overly dramatic but @Yoshi_Hardrick is back at IG Field for the first time since November 2019 and it has us feeling a little emotional. #ForTheW pic.twitter.com/iRnLAVzMgB

“I’m just excited to be back, man,” began Hardrick. “I miss Winnipeg. My kids miss Winnipeg. I just miss being a Bomber. I know the ’19 season is over and we’re ready to earn it again in 2021.”

Hardrick arrived in Winnipeg from his offseason home in Lincoln, Neb. a couple of weeks ago and immediately began his isolation. Friday marked his first opportunity to be at the facility.

What happens next with the opening of training camp will certainly be different, what with the Canadian Football League’s strict return-to-play protocols. Not that those protocols will bother Hardrick at all.

“Basically we just have to show up and do what they say,” he said. “I don’t have a lot of that info, but right now we have to wear masks, we have to get tested. No matter what they say, we’re going to do it to play. The guys are all on board. We have a veteran team and there’s not one thing that’s going to hold us back. That’s not a thing I’m worried about at all… no protocols, checklist or anything like that. They can have my fingers if they want them. I’m just ready to play ball.”

The Bombers will return all five of their regular starters along the offensive line from 2019, with the only departure seeing Cody Speller – who filled in for an injured Michael Couture in the playoffs – now in Toronto with the Argonauts.

Hardrick said the O-line has been in constant contact with each other over the last year and a half, regularly sharing workouts, FaceTiming and group texting – both as a method to stay in touch and to stay motivated.

“Just from being in Winnipeg the last couple years, I’m expecting great things,” said Hardrick of the offensive line. “We’re going to come to work, we’re going to win every day and we’ll let the results take care of themselves. Just come in to work, being happy to be at work, working with the guys… just being able to do what we love; being able to do what I dreamed of as a kid after missing it for a year and a half.

The ‘fun’ part will always be on display when Hardrick is on the field, whether it’s his hustle and enthusiasm during a regular practice or his ‘Hardrick Hop’ into fans in the end zone after a Bombers TD. It’s even there on his Instagram page…

Asked if he considered coming back this year to play running back or return kicks, Hardrick smiled and then said:

“Man, I’m just excited. I don’t know how to put it… blessed, having the game taken away from me and coming off a Grey Cup, even though 2019 is behind us, I’m just itching to get back out there even more now.”