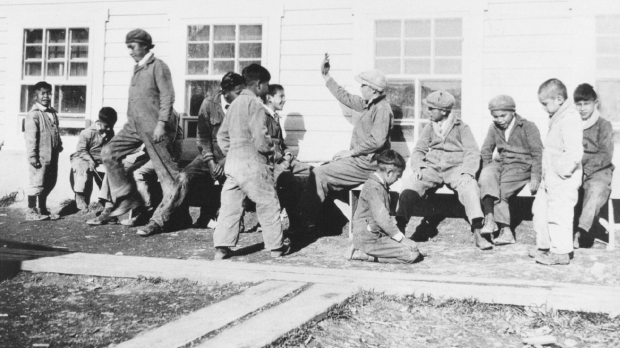 WINNIPEG — For over a decade, Wallace McKay was forced to attend residential schools.

McKay is from Sachigo Lake First Nation in northwestern Ontario.

In 1954, at the age of five, he was taken from his home and sent to Pelican Lake Indian Residential School in Sioux Lookout, over 400 kilometres away.

“You could not talk to anybody because of the threat that you would get punished for talking in your own language,” said McKay, who didn’t know English at the time.

His older brother had already been taken to Pelican Lake but siblings were forcibly separated at the residential school and he could only see his brother during meals, a table away.

“The loneliness is something that I experienced that I’ll never forget,” he said.

McKay describes his time at Pelican Lake Indian Residential school and, later, when he was about twelve and thirteen at Shingwauk Residential School in Sault Ste. Marie, as nothing short of horrific.

“We would not see it but we knew what was happening,” said McKay. “The boys would tell us what had been done to them.”

McKay, along with other students, tried to run away multiple times.

“What you survived that week you weren’t sure you were going to survive the next week,” he said.

Some children, says McKay, never made it out alive.

“During the winter, if a child died, they would house the body over the winter,” he said, “And when spring came they would dig a hole for the body.”

Eventually, McKay made it out of the residential school system and attended a public high school, where he also experienced discrimination.

“You had the churches and the government’s total control over you and then you go to a public school and face racism,” recounts McKay, adding he was the only Indigenous student at the public high school he attended.

“It was not only racism by the students but the teachers also.”

Despite what McKay endured while forced to attend a residential school, he says he considers himself lucky.

He never lost the ability to speak his language and now has a regular radio broadcast in In-Nee-Nee-Moh-Win out of Sioux Lookout.

McKay says his wife and family are a source of strength because, while the physical bruises have long since healed, “What does not heal is the spiritual part, the soul that’s been damaged by the churches,” he said.

McKay adds that, until the remains of all children killed at residential schools in Canada are found and brought back to their families, there can be no true appreciation for reconciliation.

“The saddest thing is what happened to the parents. The lingering uncertainty, I think, is a form of cruelty.”

Other First Nation community members have said the same.