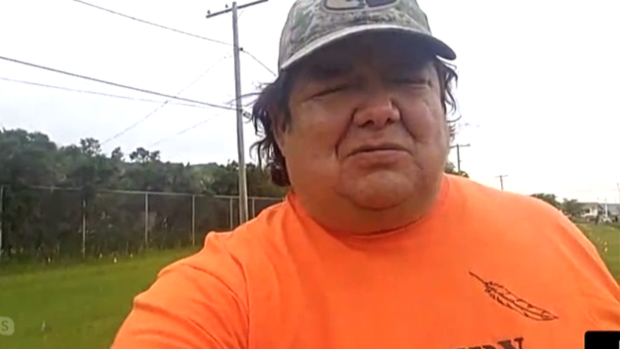 With hundreds more unmarked graves discovered on the grounds of a former residential school in Saskatchewan, survivors of the system are once again speaking out about their experiences.

Cowessess First Nation, located 164 kilometres east of Regina, announced at a press conference on Thursday that it had found an estimated 751 unmarked burial sites on the grounds of the former Marieval Indian Residential School.

The news comes less than a month after the discovery of the remains of 215 Indigenous children buried in unmarked graves at Kamloops Residential School in Kamloops, B.C.

According to the University of Regina, the Marieval residential school operated from 1899 to 1997 in the Qu’Appelle Valley. Marieval was run by the Roman Catholic Church until it handed over administration to the federal government in 1968.

Cowessess First Nation took over its operations in 1981. The residential school was later demolished in 1999 and replaced with a day school.

For survivors of Canada’s residential school system, the discovery in Cowessess, while not unexpected, renewed feelings of grief and trauma.

“Just feeling like the wind was knocked out of me again,” Lou-Ann Neel, a residential school survivor, told CTV’s Your Morning on Thursday.

Elder Florence Sparvier, a survivor of Marieval, said at the press conference that she had no choice but to go there. She explained that one of her parents would have been jailed if they didn’t send a child to the school.

“In order to keep the family together, we went to boarding school. They brought us there, we stayed there. And we learned, they pounded it into us, and really they were very mean. When I say pounding, I mean pounding,” Sparvier said.

She said the students were forced to learn about the Catholic god, while nuns and priests condemned First Nations people for not following the Catholic religion.

“They told us our people, our parents and grandparents had no, they didn’t have a way to be spiritual, because we were all heathens,” Sparvier said.

“They were putting us down as a people,” she added. “So we learn how to not like who we were. And that has gone on and on, and it’s still going on.”

Barry Kennedy, a survivor of the Marieval residential school, told CTV News Channel on Thursday that he “can’t find the words” to describe how he feels knowing more than 750 graves surround his former school.

“I am outraged, I am saddened and I’m depressed,” Kennedy said in an interview from the gravesite at Marieval. “The feeling here is so heavy.”

Kennedy said it is likely that some of the graves could be former students he once knew.

“I got a friend that’s missing. His name was Brian, and one night he was taken like everybody else was and he just didn’t return. So is he here? Is he here amongst all these graves?” Kennedy said.

Kennedy arrived at Marieval when he was five years old, and says he witnessed burials throughout his time at the school while helping the church as an altar boy.

“We were called to the church one early morning… we were brought outside and they were burying someone. Who it was, whether it was a boy or a girl, I don’t know. But what I do know is that this individual was wrapped in a sheet and there was a hole dug,” he said.

Kennedy said he experienced brutality at the school from the moment he arrived. He said “everything was done with a physical” hand at the school, and children were frequently slapped, punched and kicked, among other abuses.

Kennedy said they were also given food that was so rancid that the children threw up from eating it, only to be made by the priests and nuns to eat their own vomit.

Kennedy noted that some of these details may be difficult for people to hear. However, he said these atrocities need to be acknowledged not only in Canada, but across North America.

“This has to be a worldwide cry of what systemic racism created,” he said.

While the road to reconciliation continues to be a long one, Kennedy said it is a necessary journey to “heal as a country.”

“We have to try and fix it in a respectful way so that we can move forward, not only as Indigenous nations of Canada, but as a country. We have to make this right,” Kennedy said.

Although she attended the Marievel residential school 56 years ago, Debbie Delorme says the pain and trauma she endured there still haunts her today.

“I remember looking out the window and to my grandfather’s place, way out by the lake and crying, wanting to go home,” Delorme told CTV National News.

Delorme was taken when she was five years old and says all of her immediate family were forced to attend Marievel. She said they all suffered multiple forms of abuse.

“When I was in Grade 1, I almost froze and I was also sexually, physically, and mentally abused,” Delorme said. “Any abuse that anybody talks about was all true.”

She added that her grandfather lost his hearing while at the school after being hit in the back of the head with a two-by-four.

Another survivor, Eagleclaw Bunnie, says all of his immediate family was also forced to attend Marievel. He told CTV National News that his family was broken apart by the residential school “completely and utterly in every single way.”

Bunnie said he didn’t get to see his younger sister, Amber Peltier, until she was 17 when she was still in the residential school.

As a survivor of St. Anne’s Residential School in northern Ontario, Elizabeth Sackaney said she knows the discoveries in Kamloops and now Cowessess are just the beginning.

“A lot of things to think about. It’s hard knowing that we’re finding more bodies all over. And it’s not going to be finished,” Sackaney told CTV’s Your Morning on Thursday.

Sackaney reflected on her time at the former residential school. She remembered the electric chair, and there being a nearby hospital that nuns and priests took students to.

“When I was living in residential school there was an electric chair. There was a tunnel to take you to the hospital, not to take you out on top of the ground,” Sackaney said.

Looking back, she said she thought the abuses she faced as a child were games or jokes.

“They would stand up on a balcony, take all of us in there and throw candies at us and we would be fighting, and people fighting each other and they would be standing there laughing at us, and we used to think it’s funny, but now when I really think about these things, these things weren’t funny. It was very serious,” she said.

While at St. Anne’s, a lot of children went missing, and Sackaney thinks a survey of the ground could reveal where some ended up.

“I wonder how many they’re going to find in Fort Albany, St. Anne’s School, a lot of kids went missing, a lot of kids something happened to them,” she said.

Neel said that the only way forward is to find the truth and share them without sugar-coating, and that the Catholic Church needs to do their part and release the documents that have been requested.

“If we’re going to achieve any form of reconciliation as a country, these truths have to be known, we have to be willing to help each other and the church really needs to be able to respond to what its own members and nearby First Nations communities are asking for,” she said.

What she finds disturbing is just how many people in Canada say they are unaware of residential schools, and that for years people who spoke about the horrors weren’t believed.

“It’s really troubling that this many people would report these things, and nobody would believe them,” she said. “I think that’s a real symptom that we need to do something about the way we respond to these kinds of things.”

Canada’s reputation as a friendly, humanitarian country has been part of the reason that these atrocities have been swept under the rug for so long, she added.

“Maybe we’ve done just too good of a job of promoting Canada as this place where these things couldn’t happen,” she said. “And here we are finding out the exact opposite.”

Sackaney just wants the truth to come out, and says too many people have known for too long with no consequences.

Chief Robert Joseph, the ambassador for Reconciliation Canada and a member of the National Assembly of First Nations Elders Council, told CTV News Channel on Thursday that the discovery of these unmarked burial sites presents “unrelenting grief” for residential school survivors.

When he heard about the findings in Cowessess, Joseph, a survivor of St. Michael’s Residential School in Alert Bay, B.C., said he was filled with sorrow.

“Even though we had the experience in Kamloops, these new revelations were just traumatizing. And I know that others, Canadians were also in shock and dismay,” Joseph said.

He says Canada has come to a “real moment of reckoning” in regards to its legacy on residential schools.

“We have the opportunity to reflect deeply on our shared history and the turn of events that are revealing some really difficult traits about us, about Canadian society, and how they treated little children in residential school days,” Joseph said.

While Canada formally apologized for its residential school system in 2008, the federal government has implemented only eight of 94 Calls to Action issued in 2015’s final report from the Truth and Reconciliation Commission of Canada (TRC).

Joseph said he is disappointed that the country hasn’t made more progress towards reconciliation.

“There ought to have been a lot of work by now, and there should have been some shift, some transformation of our attitudes toward each other and our willingness to engage in creating new kinds of relationships,” he explained.

With the discovery of these latest unmarked graves, Joseph said it is important for Canadians to have a “deepened dialogue” with Indigenous people about how these findings are impacting them.

“It’s important for Canadians to know that from our cultural perspective, it’s the height of indignity to treat the decease in any way that’s less than respectful, so our attention needs to be on addressing the way we see each other,” Joseph said.