Zach Collaros fully understands the logic behind it and that the decision was both sound and rational.

And while he also didn’t necessarily agree with the verdict that he would not start this weekend’s game in Vancouver against the B.C. Lions – what with the Winnipeg Blue Bombers having already locked up first place in the West Division – he also understood this: protesting the move wasn’t an argument he could win.

The Blue Bombers will rest the Canadian Football League’s reigning Most Outstanding Player – and front runner to win it again – on Saturday, opting to start second-year man Dru Brown in his place, with Dakota Prukop also expected to get reps.

“Obviously you always want to be out there, so you never love hearing that news,” said Collaros. “At the same time, you just trust in the process of what we’re going to do.

“Both guys are guys that love the game of football, they really understand what we’re doing here, they understand CFL coverages and how to attack them. Both are really good athletes; both have different strengths. I’m really excited for both those guys to get out there and play.”

Collaros still might make the trip to Vancouver as another set of eyes and ears in addition to offensive coordinator Buck Pierce, with head coach Mike O’Shea saying, “We’ll see. I’m sure he’d like to travel and I’m sure he’d be an asset to have on the sideline.”

Saturday would mark the first career start for Brown, who came off the bench in the regular season finale last year in Calgary against the Stampeders and completed seven of 14 passes for 49 yards, while rushing seven times for 44 yards. 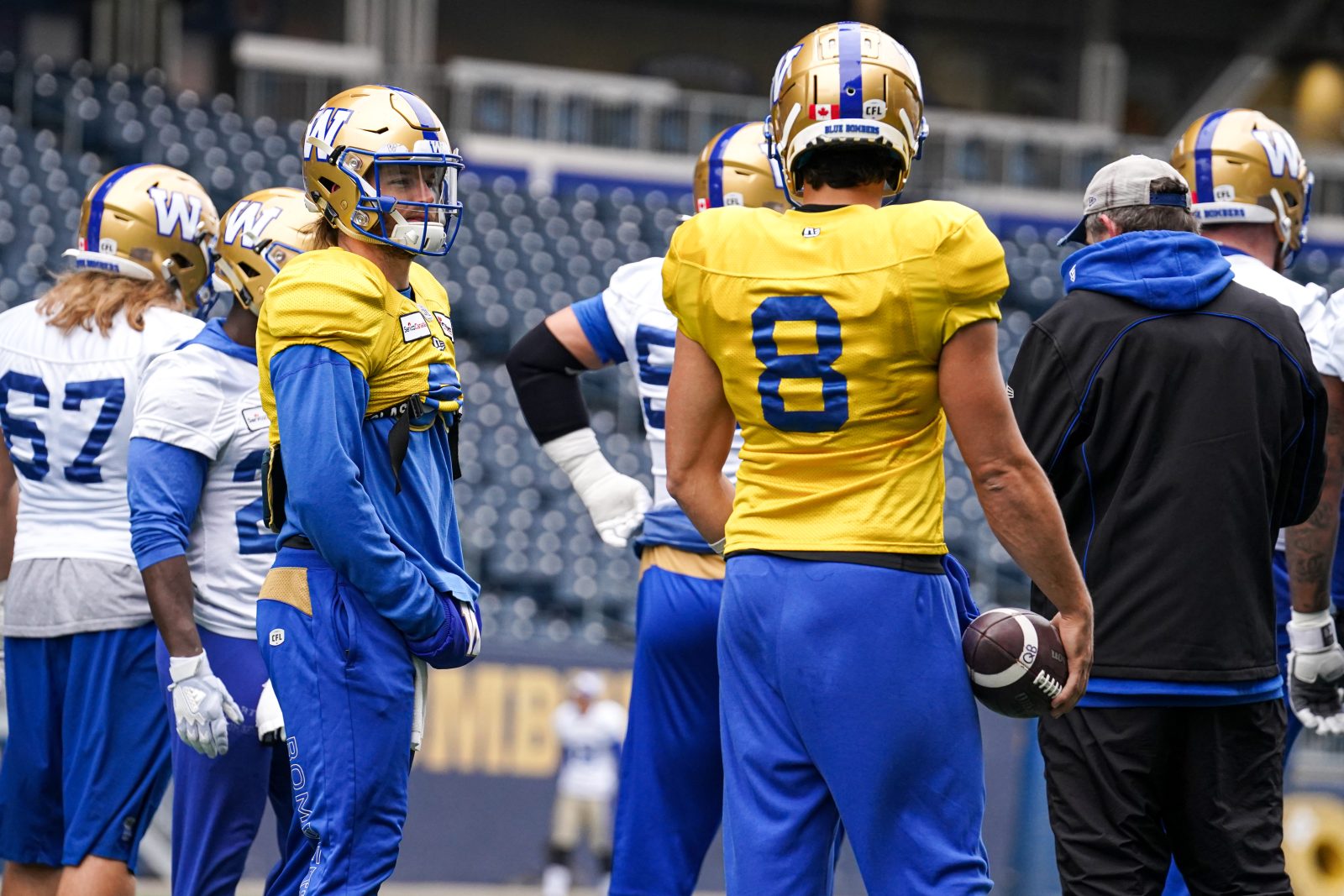 And while his reps have been limited this season, his growth has also been obvious. He came off the bench late to complete all three of his passes and help set up the game-winning field goal in a Week 1 win over the Ottawa RedBlacks, threw for a TD in relief in the Banjo Bowl victory over the Saskatchewan Roughriders and then hit Dalton Schoen for a score in last week’s blowout of the Edmonton Elks.

“Dru is going to be a really great player for a long time,” said Collaros. “Since Day 1 here he’s been very inquisitive of how the CFL game works, of how different offences around the league work and why they’re doing different things. He’s a football junkie. We spend a lot of time watching tape and talking football together and he sees the game really well. I’m really excited for him to get out there and get some tape and put it all on tape.”

A year ago, Collaros referred to Brown as a ‘gym rat’ and is now calling him a ‘football junkie’ – a guy, like Collaros himself and Prukop, who loves to study the game is constantly devising concepts. That led to the play they designed last week that saw Prukop hit Brady Oliveira for a TD in a short-yardage situation (explained here).

And when asked how much he had learned from Collaros during his days here, the question was barely out of the inquisitor’s mouth when Brown spit out his answer. 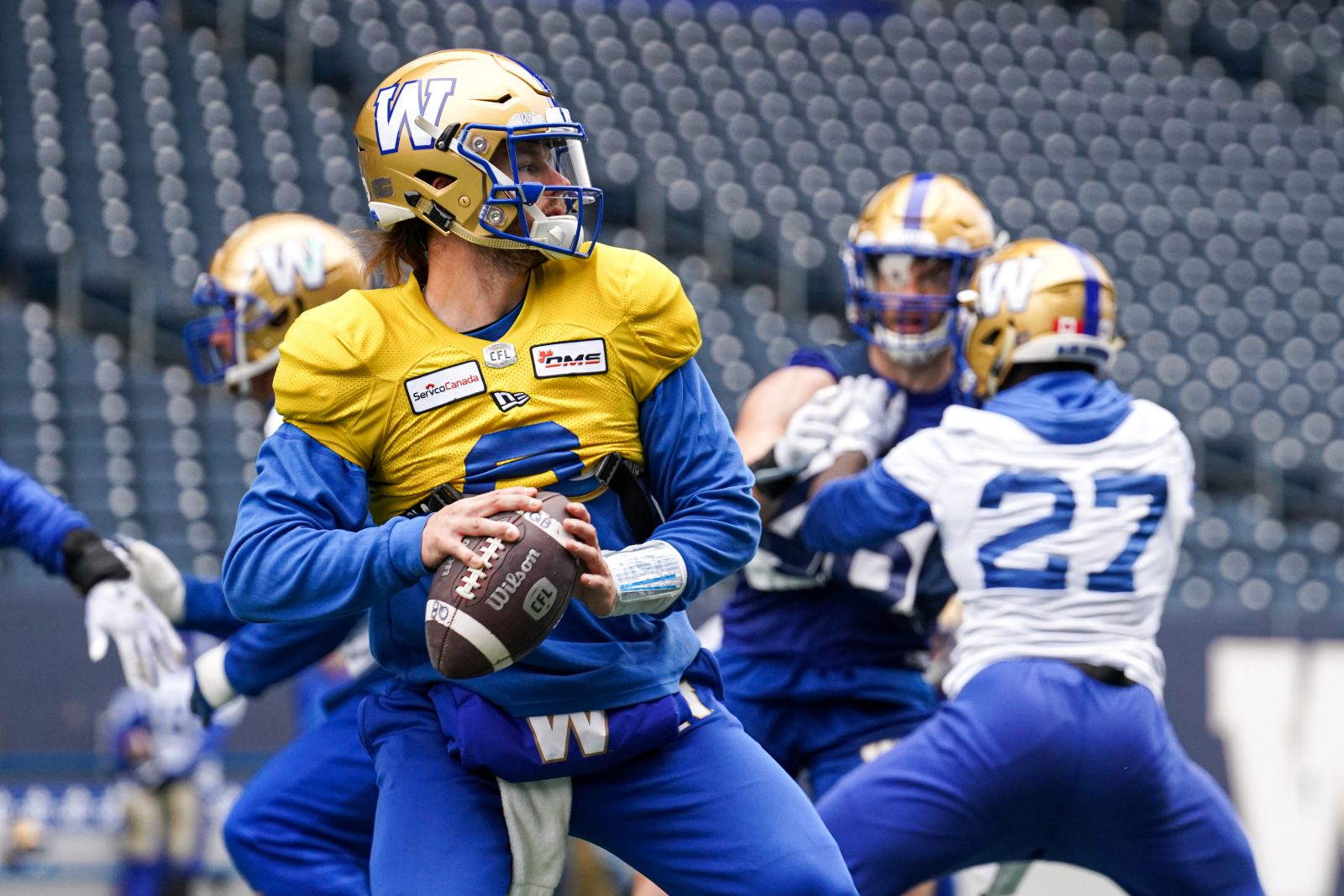 “Everything,” he said. “Him and Buck and even Dakota, I mean, I’ve learned a lot from Dakota this year. But being super green to the game coming up here, Zach was really special to show me the ropes and teach me the things that maybe I didn’t even know I didn’t know just because it’s so different from down south. He was able to communicate early to me just about some of the carry over, some of the different things and he still does it to this day. It just shows the type of leader he is and the type of person he is.”

Brown spoke glowingly of the Blue Bombers QB room – himself, Collaros, Prukop and Pierce – and how their similar personalities and approach to the game has made it such a perfect dynamic.

“Me and Dakota are kind of similar in age and then Zach is he super veteran of the group. I maybe bring out some of the immaturity at times,” Brown said with a chuckle, “and then Zach’s able to show us the ropes as far as how to carry yourself. Then Dakota is right smack in the middle, and he’s been through a lot, as well.

“… The coolest part is not one of us feels like we know more than the other. It’s a really cool learning environment to be a part of.” 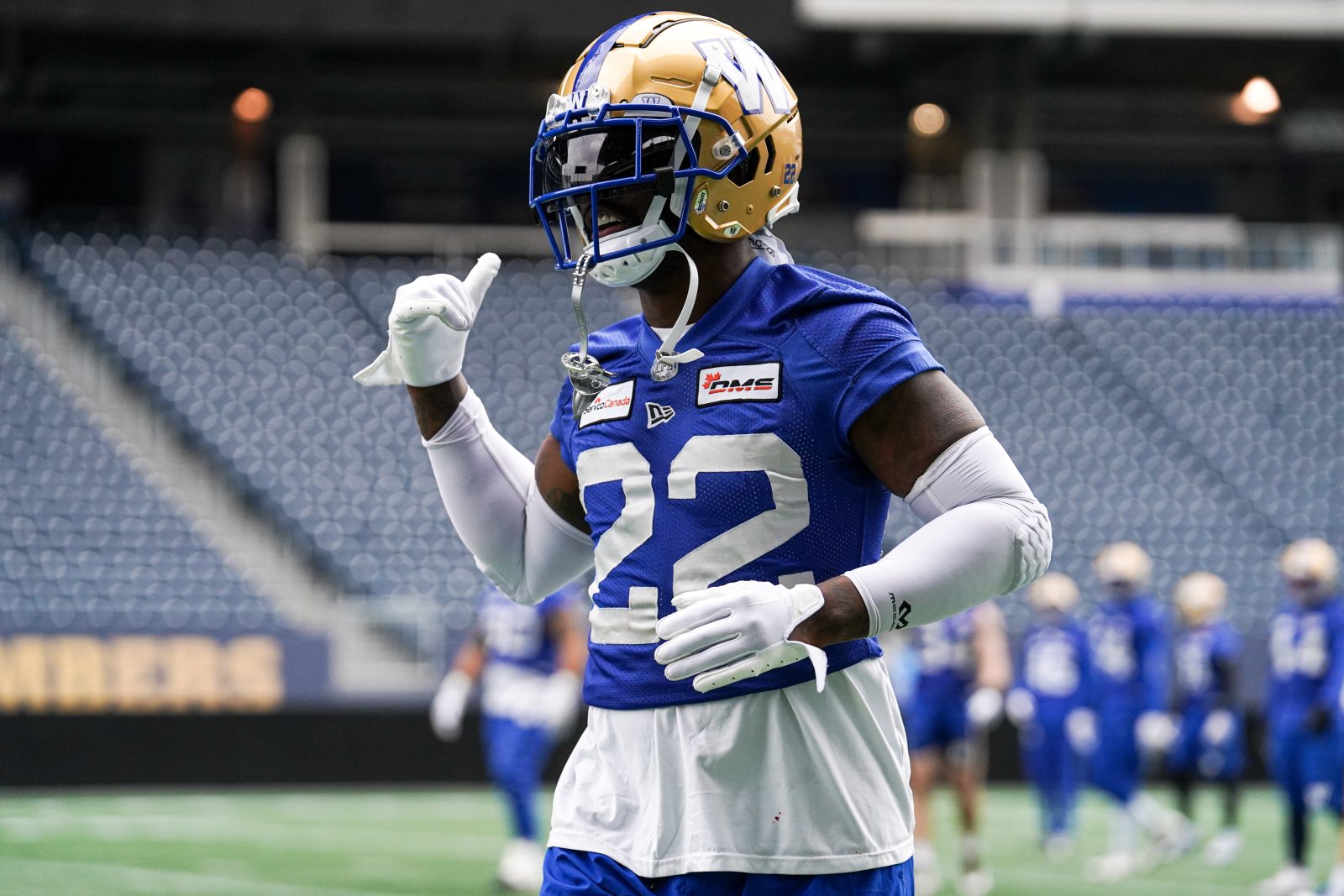 The QB decision aside, there will be other roster shuffling done before Saturday’s game – although much of it might not be made official until the release of the depth chart on Friday.

For what it’s worth, both Stanley Bryant and Jermarcus Hardrick did not practice on Wednesday, with their spots at offensive tackle filled by Geoff Gray and Eric Lofton. Chris Kolankowski took reps at guard and Michael Couture at centre, and Alden Darby, Jr. was busy taking most of the work at the dime spot.

Also not practising were receivers Greg Ellingson, Drew Wolitarsky and Carlton Agudosi, as well as cornerback Demerio Houston. Malik Clements was back practising and was getting some reps at the weak-side linebacker spot.

Asked if he expected to see Ellingson before the playoffs, O’Shea answered in the affirmative and added this on the decision to activate Darby, Jr. from the one-game injured list and move Donald Rutledge, Jr. to the practice roster:

“(Rutledge, Jr.) is a good football player. We just had the opportunity to bring in Alden Darby and he’s a very good football player, too, with a ton more experience. Alden’s played a bunch of different positions in different systems. He’s won with us. It was one of those pieces we felt we had to add.” 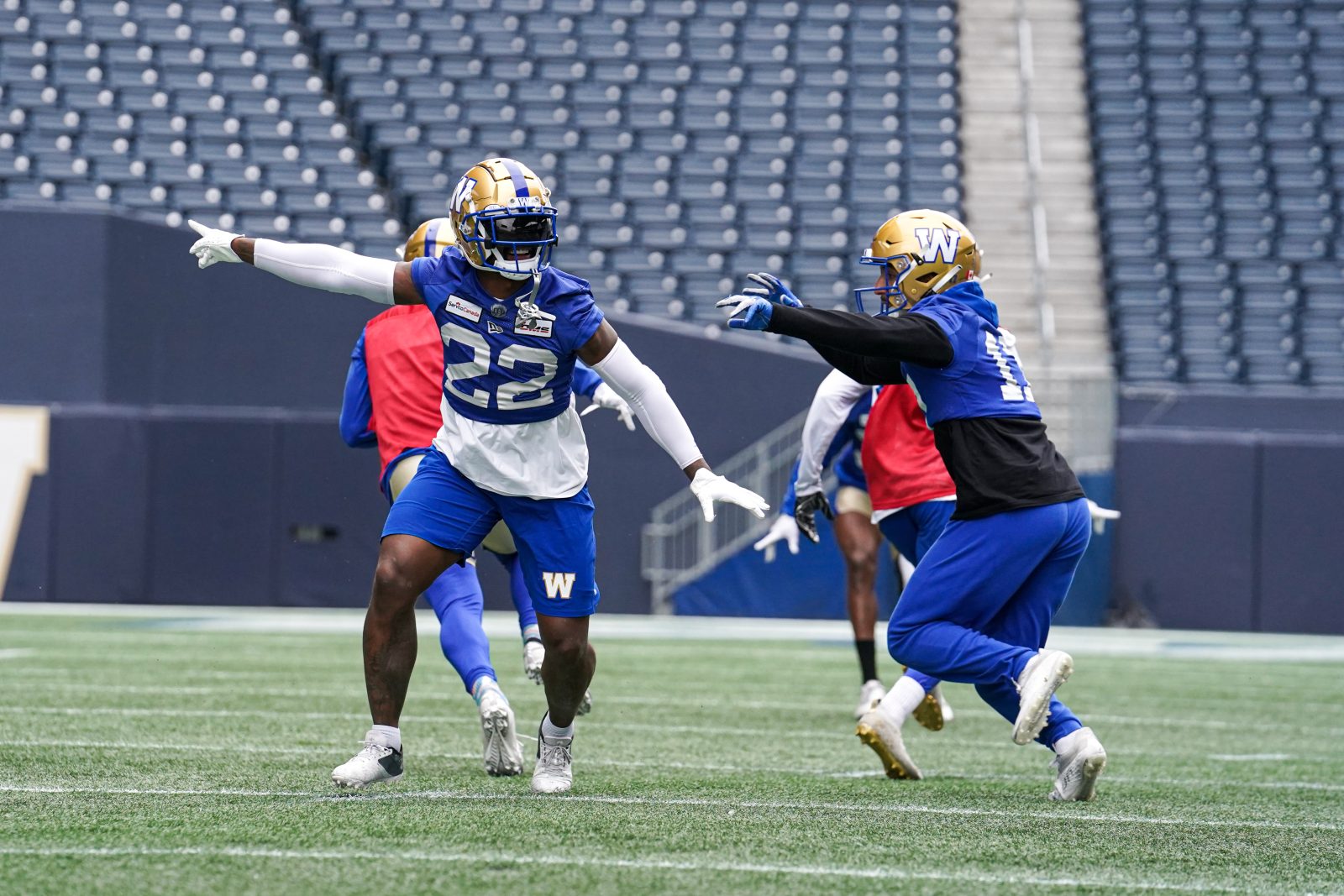 O’Shea, when asked about the importance of linebacker Adam Bighill as a building block for the team’s foundation:

“He’s a rock. Absolutely. A big one. A big rock. I don’t know how much more you can say about him; I probably haven’t talked about him enough this year, I guess. So versatile, good leader, incredibly smart and then this ability to cram more work in a day than most people. He’s been incredible for us.”

Manitoba Premier Heather Stefanson announced the government is investing up to $5.5 million to help support the Winnipeg Football Club’s bit to host the 2024 or 2025 Grey Cup Festival.

The government news release is here.

Blue Bombers sensational rookie receiver Dalton Schoen was named one of the CFL’s Top Performers for his work in last week’s 48-11 win over the Edmonton Elks, along with Hamilton RB Wes Hills and Tiger-Cat DE Malik Carney.

Schoen pulled in seven passes for 162 yards – a career high – and three touchdowns in the victory. Schoen currently leads the league in both receiving yards (1,275) and in touchdowns (14), also is first with 39 second-down conversion catches.

(182058)
$32.39 (as of December 8, 2022 10:28 GMT -06:00 - More infoProduct prices and availability are accurate as of the date/time indicated and are subject to change. Any price and availability information displayed on [relevant Amazon Site(s), as applicable] at the time of purchase will apply to the purchase of this product.)

(12084)
$4.92 (as of December 8, 2022 10:28 GMT -06:00 - More infoProduct prices and availability are accurate as of the date/time indicated and are subject to change. Any price and availability information displayed on [relevant Amazon Site(s), as applicable] at the time of purchase will apply to the purchase of this product.)

(4123)
$18.99 (as of December 8, 2022 10:28 GMT -06:00 - More infoProduct prices and availability are accurate as of the date/time indicated and are subject to change. Any price and availability information displayed on [relevant Amazon Site(s), as applicable] at the time of purchase will apply to the purchase of this product.)

(35858)
$49.14 (as of December 8, 2022 10:28 GMT -06:00 - More infoProduct prices and availability are accurate as of the date/time indicated and are subject to change. Any price and availability information displayed on [relevant Amazon Site(s), as applicable] at the time of purchase will apply to the purchase of this product.)

(3013)
$17.34 (as of December 8, 2022 10:28 GMT -06:00 - More infoProduct prices and availability are accurate as of the date/time indicated and are subject to change. Any price and availability information displayed on [relevant Amazon Site(s), as applicable] at the time of purchase will apply to the purchase of this product.)