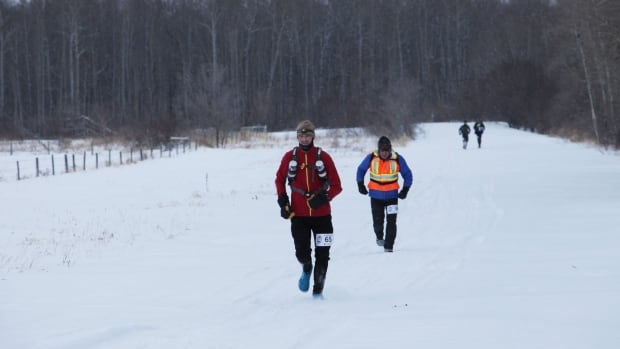 Imagine willingly running more than 160 km cross-country in the dead of a Manitoba winter.

Dozens of people are doing just that this weekend.

Actif Epica is an ultra-marathon whose participants have the option to run or cycle distances of 54 km, 120 km or 162 km (the equivalent to 100 miles) — and cyclists can also opt to travel as far as 200 km.

Why might people want to put themselves through this sort of endeavour?

“People like to just test themselves and see what they’re made of — it’s an interesting challenge and we have that opportunity here in Manitoba to challenge ourselves in that sort of a way. So some people are just saying this is the challenge presented to us this time of year, so why not take it on.”

This is the ninth edition of the race, and there are 40 Manitobans and 78 participants overall, Wiebe said, which ties the highest number of participants the race has had.

The 78 runners and cyclists will face the sheer physical challenge ahead while battling the winter elements. But Wiebe, who once cycled a stretch of Actif Epica as part of a relay team, says the mental aspect might be the biggest hurdle for the participants.

“That can just yo-yo, almost minute by minute where you feel really mentally strong, and like you’re going to plow through, and you’re just loving life. Then the next minute, life isn’t quite so good and you wonder why in the world you’re doing this,” he said.

Historically, Actif Epica has been a point-to-point race that starts in southern Manitoba and ends at The Forks. That changed this year, however, partially because it was tough for emergency vehicles to have access to the route in rural areas and there was little cellphone reception, Wiebe said.

This year, runners start at The Forks and end at The Forks; the furthest anyone will go is St. Pierre, Man., before turning back.

Participants would have started their journeys Friday and will return as late as Sunday.