And what happens next – whether the Canadian Football League’s leading receiver and Most Outstanding Rookie returns or finds a home in the National Football League – could be a massive step in the 26-year-old’s career and, obviously, what the Blue Bombers’ receiving corps might look like in 2023.

Schoen is under contract with the Blue Bombers for next year, but can explore opportunities down south in the National Football League ‘window.’

“Those are conversations that will be had here in the future,” Schoen said Tuesday as the Blue Bombers gathered for final meetings before the offseason. “My agent did a great job because that’s exactly my thought process and he just kept telling me all year long, ‘just focus on the Grey Cup’ and that’s all I wanted to do.

“He just said we’ll work on the other stuff when the time comes and that’s been my sole drive, the Grey Cup, this whole time. I haven’t thought about anything else so that’s the stuff that remains to be seen.

“I don’ know what that’s going to look like,” he added when asked about possible workouts with NFL teams. “My main focus right now is getting a little bit of recovery – I just played a 20-game season. Like I said, that remains to be seen in the future. I haven’t been through this before, so I don’t exactly know what the timeline looks like.”

Schoen became an instant fan favourite in 2023 not just because he led the CFL in receiving yardage with 1,441 yards and tied for the league lead with 16 touchdowns, but because of his incredible back story centred on his ‘Street dawg’ mentality and based on hard work.

He’s had NFL looks before – from the Los Angeles Chargers, Kansas City Chiefs and Washington Commanders – but clearly honed his skills in his one season starring in the Blue Bombers offence.

“I hope he gets that opportunity and I think that he will have some opportunities,” said quarterback Zach Collaros. “Knowing him the way I do now I wouldn’t be surprised. Obviously, I want him back on our team – selfishly – but Dalton’s going to do great things whatever it is he does.

“He showed everybody this season that he could play at that level. Guys talk about it all the time – you just need an opportunity and somebody to really like you and give you a shot and if he gets that I think he’s going to play at a very high level… I think just adding him to the locker room anywhere makes the organization better.”

Schoen said Tuesday the opportunity to showcase his skills – to ‘get some tape’ – was secondary to his whole season-long experience and, especially, just being on a team again chasing something.

“It’s less about the tape and more just about the fact that I got to get back to playing meaningful football,” he said. “The last two years in the fall I was sitting on the couch watching games on TV. I was working hard every day; I was training, I was preparing myself for an opportunity that just never came. I was hoping for something to work out and it wasn’t.

“So, to come up here and get to play in front of 30,000 of these home fans, to get to play in the Grey Cup, it was truly really meaningful to meet all these great people. That’s the biggest takeaway from that.” 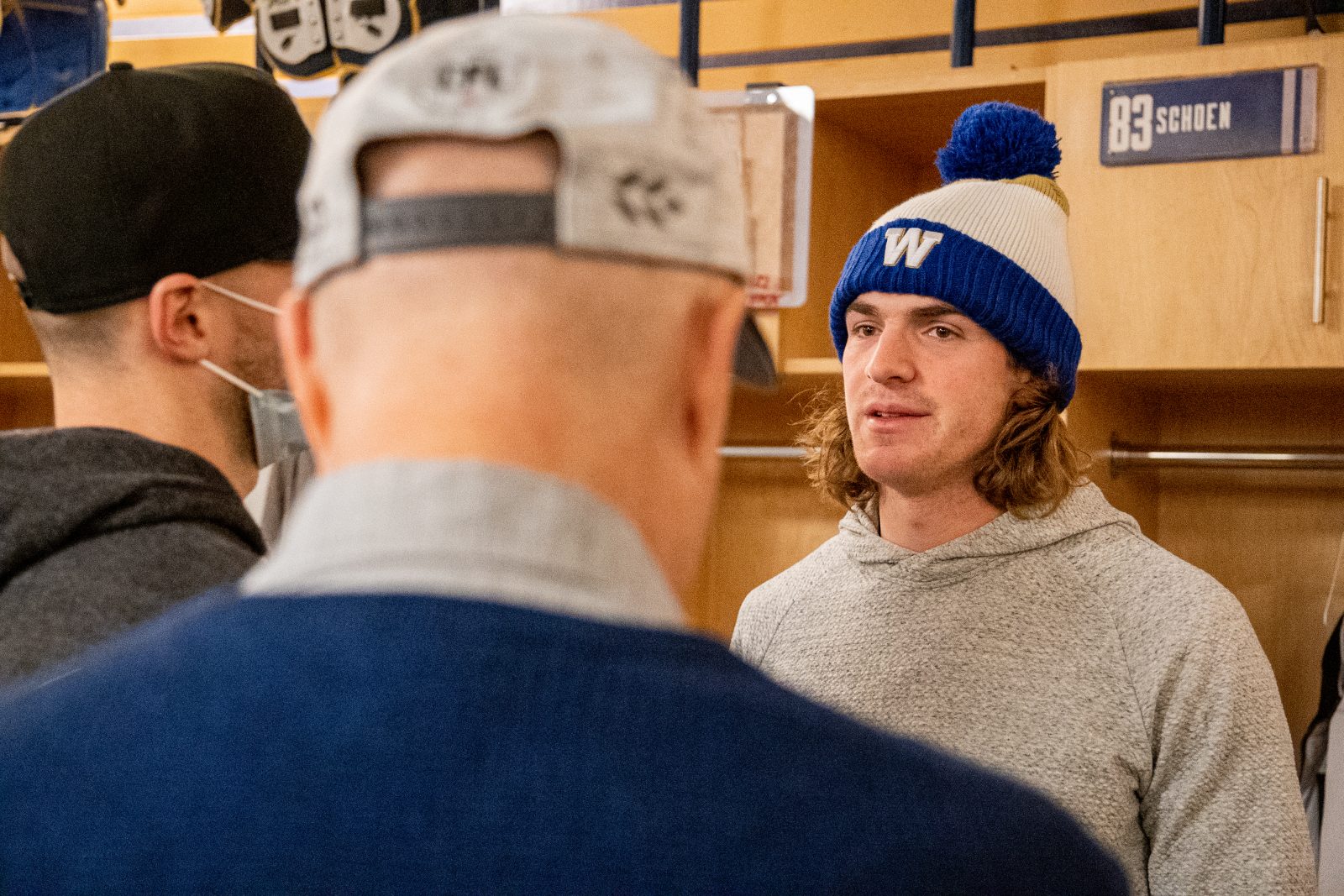 “There’s something about being on a team (again), but I think this team meant so much more than just a regular average team, or at least from some cultures I’ve seen in different places. That’s why Sunday hurt so bad – it’s the quality of people in this locker room and this facility. It runs more than just the players and coaches, it’s everyone who is involved in this organization – they care so much, they put in so much time. Seeing each day how much each guy in this locker room sacrifices and what they give up to do this, to be successful at this, that’s what made it hurt so bad not to get the job done.”

Schoen signed with the Blue Bombers last spring, back when there were just officially seven receivers on the roster. By the time he arrived for rookie camp that number had ballooned to over 20.

But – and this is one of the beauties of the CFL – if you can play, you play. Here he didn’t have to battle the politics that sometimes come with battling against an NFL draft pick or highly-rated prospect. Schoen proved that from the first day he stepped on the field here.

“I’ve always been confident in myself as a player, no matter the level. I just feel like I needed the opportunity,” he said. “In this profession it takes more than just talent to make it – it takes the right opportunity, same thing it took for me here. I could have very easily come up here and just not got a good look in camp and been sent home, but things worked out for me the right way. I’m hopeful that no matter what the next step is I’m just going to continue to be confident in myself as a player and hope I get a good opportunity.

“It was definitely a whirlwind, and I probably haven’t really reflected on that a whole lot yet,” he added. “The biggest thing for me as I look back at the whole season, this whole process, is I’m just so appreciative of the people in this locker room with me, the people that are in this facility with me. Joining a team that was back-to-back Grey Cup champs – it was overwhelming when I was coming up here. You know you’re joining a super-talent team that has done it, and so to see how I was received and brought up to speed by the rest of the receivers, the rest of the offence, how I was accepted by Zach, it means the world to me. To get to be here and be a part of this and play meaningful football games for the first time since 2019, it was really special.”

(142772)
$31.99 (as of December 4, 2022 10:25 GMT -06:00 - More infoProduct prices and availability are accurate as of the date/time indicated and are subject to change. Any price and availability information displayed on [relevant Amazon Site(s), as applicable] at the time of purchase will apply to the purchase of this product.)

(2532)
$20.79 (as of December 4, 2022 10:25 GMT -06:00 - More infoProduct prices and availability are accurate as of the date/time indicated and are subject to change. Any price and availability information displayed on [relevant Amazon Site(s), as applicable] at the time of purchase will apply to the purchase of this product.)

(9446)
$59.99 (as of December 4, 2022 10:25 GMT -06:00 - More infoProduct prices and availability are accurate as of the date/time indicated and are subject to change. Any price and availability information displayed on [relevant Amazon Site(s), as applicable] at the time of purchase will apply to the purchase of this product.)

(4696)
$20.08 (as of December 4, 2022 10:25 GMT -06:00 - More infoProduct prices and availability are accurate as of the date/time indicated and are subject to change. Any price and availability information displayed on [relevant Amazon Site(s), as applicable] at the time of purchase will apply to the purchase of this product.)

Things To Do While You Poo On The Loo: Activity Book With Funny Facts, Bathroom Jokes, Poop Puzzles, Sudoku & Much More. Perfect Gag Gift.

(5668)
$8.99 (as of December 4, 2022 10:25 GMT -06:00 - More infoProduct prices and availability are accurate as of the date/time indicated and are subject to change. Any price and availability information displayed on [relevant Amazon Site(s), as applicable] at the time of purchase will apply to the purchase of this product.)