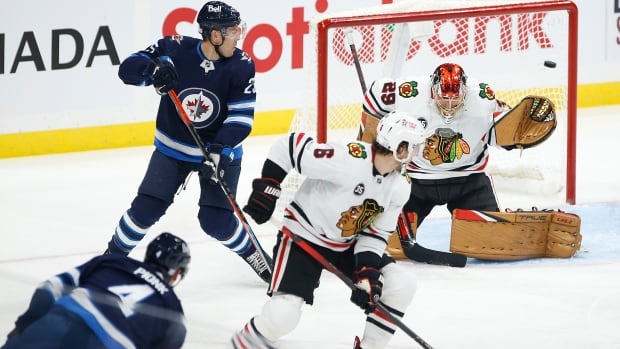 For the second day in a row, the NHL announced the postponement of three games due to COVID-19-related reasons on Monday.

The Winnipeg Jets home game against Chicago, previously scheduled for Dec. 29, is one of them.

The franchise also announced it won’t allow fans at the Canada Life Centre until at least Jan. 11, due to Manitoba’s recent guidelines for large gatherings.

Important announcement 📢 <br><br>The NHL has announced the postponement of the Dec. 29 Winnipeg Jets game vs. the Chicago Blackhawks. <br><br>DETAILS 🔽 <a href=”https://t.co/4zeXMUVksn”>pic.twitter.com/4zeXMUVksn</a>

Two matchups between the Dallas Stars and the Colorado Avalanche, on Dec. 29 and Dec. 31, have also been postponed.

The moves brought the total of postponed games this season to 70.

New dates for the games are yet to be announced.

On Sunday night, games involving the Toronto Maple Leafs and the Ottawa Senators were also postponed.

The Montreal Canadiens added five players and a member of the coaching staff to the NHL’s COVID-19 protocol list, the team announced on Monday.

Goaltender Jake Allen and defencemen Ben Chiarot, Joel Edmundson, Jeff Petry and Chris Wideman are “being monitored closely by team medical staff” and “following guidelines and protocols set by the NHL,” the team said in a statement.

Five players and a member of the coaching staff have been added to the NHL’s COVID-19 protocol list. <br><br>Cayden Primeau and Corey Schueneman have been called up from the <a href=”https://twitter.com/RocketLaval?ref_src=twsrc%5Etfw”>@RocketLaval</a> and four other players have been added to the taxi squad.<a href=”https://t.co/0WeAnj8Zij”>https://t.co/0WeAnj8Zij</a>

Goaltender Cayden Primeau and defenceman Corey Schueneman have been called up from the Rocket Laval of the American Hockey League.

NHL to return on Tuesday after 6-day break

After shutting down for a week, the NHL resumes play Tuesday with three games on the schedule amid hopes that its extended holiday break caused by a rash of positive COVID-19 test results will set the stage for the league to complete an already upended season.

The two-time defending Stanley Cup champion Tampa Bay Lightning won’t have either of its top goaltenders or their coach for its game against Montreal. Coach Peter DeBoer is out for the Vegas Golden Knights’ game at Los Angeles. And there are more disquieting signs.

The U.S. Centers for Disease Control and Prevention on Monday cut the recommended isolation period from 10 days to five, and other North American professional sports leagues have already moved in that direction. NHL Deputy Commissioner Bill Daly said, “Obviously it will spur a review of the protocol” currently in place, which includes 10 days away for those who contract the virus and experience symptoms.

Pittsburgh and Washington each added six players to the COVID-19 protocol list, and the Vegas Golden Knights found out they won’t have coach Peter DeBoer behind the bench for their game Tuesday night at Los Angeles.

Washington is set to play again Wednesday against the Nashville Predators, who are dealing with their own virus absences, but the game is scheduled to go on as planned. Nashville put captain Roman Josi and two other players on the COVID-19 protocol list.

As of now, the Winter Classic between the St. Louis Blues and Minnesota Wild is still scheduled to be played at Target Field in Minneapolis on Saturday night in keeping with the league’s New Year’s Day tradition.

The National Lacrosse League has postponed three games due to COVID-19.

The league made the announcement on Monday after consulting with health authorities and officials in Canada and the United States.

Thursday’s game between the Halifax Thunderbirds and Calgary Roughnecks at Scotiabank Saddledome is the first affected matchup.

Friday’s games between the New York Riptide and Colorado Mammoth as well as the San Diego Seals and Saskatchewan Rush at SaskTel Centre will also be rescheduled.

The NLL says it made the decision out of an abundance of caution that will keep the competitive balance in the league.

The league says it expects to play Week 6 of the season on Jan. 7-8 but will issue an update if there are any changes

Two-time Olympic champion Mikaela Shiffrin is the latest elite skier to test positive for COVID-19 with the Beijing Games less than six weeks away.

“I wanted to let you all know that I’m doing well, but unfortunately I had a positive COVID test,” the American wrote on her social media accounts Monday. “I’m following protocol and isolating.”

Shiffrin said she will miss World Cup giant slalom and slalom races scheduled for Tuesday and Wednesday, respectively, in Lienz, Austria, adding, “I’ll see you in the new year.”

👋, I wanted to let you all know that I’m doing well, but unfortunately I had a positive COVID test. I’m following protocol and isolating, &amp; I will miss Lienz. Best of luck to my teammates…I’ll be cheering for you. Thank you all for your support. I’ll see you in the new year. 🤍 <a href=”https://t.co/YxZnwWP6f1″>pic.twitter.com/YxZnwWP6f1</a>

Missing the races in Lienz is a big hit to Shiffrin’s chances of regaining the overall World Cup title. She leads Italy’s Sofia Goggia by 115 points in the standings but needs to maintain a high level of points in the technical disciplines of giant slalom and slalom since Goggia has been virtually unbeatable in the speed events of downhill and super-G.

Maryna Gąsienica-Daniel, the Polish skier who finished sixth in two giant slaloms in Courchevel, France, last week, also announced a positive test on Monday. She said on Instagram that she is “isolated at home,” and she, too, will miss the races in Lienz. Gąsienica-Daniel adds that she is “sad” but otherwise “feeling good.”

Liensberger and Robinson, who both had to sit out Courchevel, are back on the starting list for Tuesday’s race in Lienz. Gut-Behrami remains out after her positive case was announced 10 days ago.

Also, chief race director Peter Gerdol is among two women’s World Cup officials with the International Ski Federation (FIS) who tested positive after the races in Courchevel. Gerdol is being replaced by FIS race director Markus Mayr for the event in Lienz, where no spectators will be allowed.

Shiffrin finished first and second in the last two races she competed in — the two giant slaloms in Courchevel.

The next women’s World Cup race after Lienz is a slalom in Zagreb, Croatia, on Jan. 4.

NBA shortens path to return for players on protocol

NBA players who test positive for COVID-19 now have a quicker path to return to play, after the league completed a significant update to its health and safety protocols on Monday.

The biggest change: Isolation periods for players who test positive may now be significantly shortened — down to six days from what has been the customary 10 — provided those players are asymptomatic and meet other testing standards. Teams were told of the new protocols Monday in a memo sent by the league, a copy of which was obtained by The Associated Press.

That memo was sent on the same day the Centers for Disease Control and Prevention cut isolation restrictions for Americans who catch the coronavirus from 10 to five days. CDC officials made that move saying that evidence shows people with the coronavirus are most infectious in the two days before and three days after symptoms develop.

The NBA also relied on data, telling teams the updated protocols “reflects analysis of testing data that the league and its infectious disease experts and epidemiologists have gathered throughout the pandemic.” The changes were made in agreement with the National Basketball Players Association.

The Carolina Panthers have sent all of their players home from Bank of America Stadium after six more players tested positive for COVID-19 on Monday.

That brings the total number of Carolina players on the COVID-19 reserve list to 13.

Panthers coach Matt Rhule said the decision to send players home was made “to stem the tide” and get things under control. The team will conduct its meetings virtually until then, and Rhule is hoping to have players back in the building for practice on Wednesday.

The Tennessee Titans put four players — including three starters —on the the COVID-19 list, including outside linebacker Bud Dupree, wide receiver Julio Jones, defensive back Buster Skrine and receiver Nick Westbrook-Ikhine. They also put cornerback Caleb Farley, who’s on injured reserve, on the list as well.

The NFL also mandated that all media covering playoff teams and games, and the Super Bowl, must have received a COVID-19 booster by Jan. 12. Exceptions are for:

—An individual who is not eligible for a booster pursuant to the CDC definition;

—An individual who has tested positive for COVID-19 in the past 90 days;

—An individual who received monoclonal antibodies within the immediately preceding 90 days.

(15)
$42.89 (as of January 21, 2022 10:32 GMT -06:00 - More infoProduct prices and availability are accurate as of the date/time indicated and are subject to change. Any price and availability information displayed on [relevant Amazon Site(s), as applicable] at the time of purchase will apply to the purchase of this product.)

No Way Out: A Gripping Novel of Suspense

(2674)
$12.99 (as of January 21, 2022 10:32 GMT -06:00 - More infoProduct prices and availability are accurate as of the date/time indicated and are subject to change. Any price and availability information displayed on [relevant Amazon Site(s), as applicable] at the time of purchase will apply to the purchase of this product.)

(10651)
$14.57 (as of January 21, 2022 10:32 GMT -06:00 - More infoProduct prices and availability are accurate as of the date/time indicated and are subject to change. Any price and availability information displayed on [relevant Amazon Site(s), as applicable] at the time of purchase will apply to the purchase of this product.)

(88)
$9.45 (as of January 21, 2022 10:32 GMT -06:00 - More infoProduct prices and availability are accurate as of the date/time indicated and are subject to change. Any price and availability information displayed on [relevant Amazon Site(s), as applicable] at the time of purchase will apply to the purchase of this product.)

(1502)
$7.49 (as of January 21, 2022 10:32 GMT -06:00 - More infoProduct prices and availability are accurate as of the date/time indicated and are subject to change. Any price and availability information displayed on [relevant Amazon Site(s), as applicable] at the time of purchase will apply to the purchase of this product.)